On story-starters and small twigs: Philosophy of Education, Chapter 10 (Curriculum)

Chapter 10; The Knowledge of Man; Composition

"In few things do certain teachers labour in vain more than in the careful and methodical way in which they teach composition to young children. The drill that these undergo in forming sentences is unnecessary and stultifying, as much so perhaps as such drill would be in the acts of mastication and deglutination [sic]." --Towards a Philosophy of Education, Chapter 10 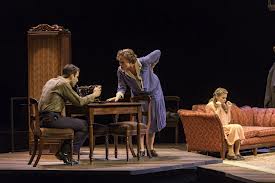 AMANDA: Honey, don’t push with your fingers. If you have to push with something, the thing to push with is a crust of bread. And chew—chew! Animals have sections in their stomachs which enable them to digest food without mastication, but human beings are supposed to chew their food before they swallow it down. Eat food leisurely, son, and really enjoy it. A well-cooked meal has lots of delicate flavors that have to be held in the mouth for appreciation. So chew your food and give your salivary glands a chance to function! ~~Tennessee Williams, The Glass Menagerie

Tom Wingfield doesn't need a lecture on how to chew his food.  He's an adult.  He knows how.  His mother means well, but she drives him up the wall, and, eventually, out of the house.

Children in Charlotte Mason's primary grades narrate a little at a time, to fully develop their powers of attention and their skill in telling back.  Same literature lists as before, for the younger ones:  stories from mythology, fairy tales, Pilgrim's Progress, Bible stories, "how we know the world is round and a great deal besides; for all their work lends itself to oral composition and the power of such composition is innate in children and is not the result of instruction."

The junior grades "write their little essays themselves." I don't think "little" is meant in a pejorative way here, it's simply referring to length.  And oh my, the reading list..."We could do anything with books like those," says one headmaster quoted in a later chapter.  Charlotte scolds him for thinking that he just needs a good book list (and for missing the point that he needs to follow her other principles of education), but I think he's at least half right; the ability to narrate well, and to turn that skill into written composition, does begin with the choice of books.  I remember, and it was not so long ago, that homeschoolers using a certain series of Christian textbooks tried to have their children narrate from the textbooks, and they argued that that was just as correct a way to apply Charlotte Mason's principles as, say, narrating from a book of Greek myths...and probably safer!  And then we have the other situation, more common in schools now, where children, being "naturally creative," are expected to create lots of output without much input.  Some writers can start from a point inside their heads, without any outside reference, but for most of us, that's as hard as being handed a brush and told to paint, without having anything to look at.  "Compose something," my piano teacher once commanded, when I was about ten.  But since I knew very little about listening to music, much less creating it, all I came back with was something stupid, a waste of time.  I had never seen anyone create music. I had no musical ideas; nothing to write music about, or sing music about, or paint music about.  And she never asked me to do that again.

According to Charlotte's theory of education, children arrive in the classroom with a dazzling array of powers of mind.  Agreed! say contemporary educators, and so children are given the paintbrush, or more often these days the keyboard, mouse, animation software, computer music program, and told to create.  But a few clicks of a "paint" program produce no more genuine art than did the "blobs" Charlotte criticized in the school art of her own time.  "Blobs" meant using the flat of the paintbrush to make a shape on the paper, which you could arrange, say, into the petals of a flower.  Charlotte said that was not true painting, but "the power of effective creation by a sort of clever trick."  In other words, on the level of rubber-stamping or potato printing, or drawing around your hand to make reindeer antlers.  Now real (adult) artists do use such techniques--blobs, stamping, layering bits of paper on the ground, whatever--to make "real" art, so we might argue her point.

However, big however:  there are a couple of reasons why blobby artmaking does not belong in the CM educational environment.  (I thought we were talking about composition?  Bear with me.)  In Home Education, Charlotte said, "This is what we wish to do for children in teaching them to draw––to cause the eye to rest, not unconsciously, but consciously, on some object of beauty which will leave in their minds an image of delight for all their lives to come. Children of six and seven draw budding twigs of oak and ash, beech and larch, with such tender fidelity to colour, tone, and gesture, that the crude little drawings are in themselves things of beauty."  If the drawing is not created from the ground up, so to speak, and if it is not based on some real object, then the child does not learn to care about what he is seeing or the art he is making, will not remember it, will not learn anything.  Small twigs painted well, and kept in a nature notebook, are better than entire "lollipop" trees, stuck up on the fridge for a few days and then thrown away.

The other reason to be cautious of such programmed art is that the students become overpraised, too confident in their own abilities ("look, I wrote music!"), but at the same time they are demeaned by being told that they're such good artists, such good writers, when they know that all they did was just blobs, happy-faces, lollipop trees.  But if that's all the teacher thinks they're capable of...

"Knowledge is not sensation, nor is it to be derived through sensation; we feed upon the thoughts of other minds; and thought applied to thought generates thought and we become more thoughtful. No one need invite us to reason, compare, imagine; the mind, like the body, digests its proper food, and it must have the labour of digestion or it ceases to function....But let information hang upon a principle, be inspired by an idea, and it is taken with avidity and used in making whatsoever in the spiritual nature stands for tissue in the physical."--Charlotte Mason, Towards a Philosophy of Education (page 26)

No paint-by-numbers, at least within the "classroom."  (What you do for fun on a rainy afternoon is your own business.)

If you look at the student responses printed in this section of the book, you will see Charlotte's version of story-starters.  There are three, more or less:  Literature.  Nature.  Current Events.  Those three are repeated over and over...that is "suggestive," as she would say.  The youngest students may just "tell back," but the oldest ones are required to turn their thoughts on spring, or Home Rule in Ireland, or the poems of Tennyson, into blank verse, or ballads, or scenes involving literary characters.  Which also, not incidentally, gives us a clear picture of the "Knowledge of Man" end of the curriculum.  The older classes obviously spent a fair amount of time reading or talking or writing about literature (especially classical mythology, if we go by the exam responses), about nature,  and about current events.  They obviously spent a lot of time reading poetry, and had some training in metre.  And without being told to use "higher levels of thinking," they were practicing synthesis and evaluation.  No blobs, no gimmicks. They were acting like real writers...at least, real writers of 1920.

PART FIVE, in which we try not to be too cynical about the state of the world, but we do need to ask some big questions...

What do we do now?

If there is no reason for an adult today to write in the metre of Tennyson, can we expect students to find meaning in such an exercise? Or find an audience or a place for their work?

Is it harder to translate the writing of 1920 into our own time and space than it is the reading?  Because you still want an audience for your serious (or seriously hilarious) writing...but I'm guessing there is little to no market for a Shakespearian sonnet about the ups and downs of computer companies.  Or a ballad about the doings at the Vatican, about light rail transit, or the "new food."  Should we have Mr. Woodhouse chat about the latest celebrity divorce?

There are still good poets out there, in fact, quite young ones.  Do we encourage our young writers to carry on older forms of writing, simply in tribute to literary tradition?

Or is it not so much going backwards as simply giving them opportunity to perform the act of knowing?

Is there any contemporary way to  respectfully, insightfully, and beautifully respond to a classic book, a piano concerto, the buds on a tree, without turning it into a rap song or a LEGO animation?

In other words, we can read, receive, participate, enjoy literature spanning centuries...but how do we reproduce?

Your thoughts?
Posted by Mama Squirrel at Sunday, February 17, 2013