On the teaching of languages, especially French (Philosophy of Education)

Philosophy of Education, Chapter 10, "The Curriculum: The Knowledge of Man: Languages"

At the sight of this little work dyspeptic people will exclaim, as they always do: "What! another of those books...!" Don't listen to them. Run your eye through the French Primer, and if you think it amusing and instructive buy it for your numerous little boys and girls, thereby delighting

Yours sincerely,
THE EDITOR.

What on earth were Charlotte Mason's secrets that allowed "nine pages of the story read straight through by the mistress, without pause or interruption of any kind...As soon as the reading ended, on the instant, without hesitation of any kind, narration began in French, different members of the class taking up the story in turn till it was finished.  All were good; some astonishingly good...Yet the time given to French is two hours and three-quarters a week only.  Such results compel attention."*

Such results just make some of us want to throw in la serviette. [Although, to be fair, these were her student teachers--not young children.]

Well, thanks to the wonders of modern technology, you too can "run your eye through the French Primer."**  You can also download Siepmann's Primary French Course Part One, and French Fables in Action.  If you can speak enough French to manage the stories and exercises in these books, you can teach French just like Charlotte Mason, and for free.  Can't lose with that.  (Also the German Primer, which you can read online although I'm not getting anywhere downloading the PDF.)

I'm not sure exactly how they managed to stretch out just a few lessons over one term (did they read a whole passage once, narrate it, and then never go back again?), and neither the prefaces to the textbooks nor the short description in Volume Six are going to shed any light on that.  I am impressed with the amount of material that these books cover, even the Primer.  If you went through the Primer and the first part of Siepmann's with the kind of attention Charlotte Mason describes--meaning that you actually remembered the lessons afterwards--you would have a solid vocabulary for reading the French literature assigned in later years.  True, you might be more comfortable talking about wagons, beehives and swords than you would computers and soccer; but that isn't necessarily a bad thing.  If you're going to read older books, you need that vocabulary and those phrases.  And since modern languages in the P.U.S. weren't a drill-and-kill or strictly utilitarian subject, everyday conversation, though important, wasn't the only or the ultimate goal.

If you don't speak any French, or want to study Spanish or some other language that you do or don't already speak yourself, obviously your needs will be different.  But it still might help to get a look at the books and see what sorts of things were covered at the various levels.

(I want to publish this post now, but I may come back later and add some points on learning languages.  I'd be happy to hear your thoughts in the meantime.) 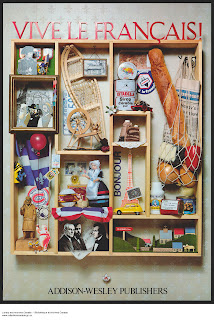 *Written by H.W. Household.  Originally published in Journal of Education and School World, Volume 52, Oxford University Press, 1920.  Reprinted in Towards a Philosophy of Education, Chapter 10.

**If you're comparing the 1890 French Primer with the page counts given in the PUS programmes, especially the programmes from around 1920, they don't match; there aren't enough pages.  I don't know if later editions just made the book longer, or if they completely renumbered the pages.
Posted by Mama Squirrel at Wednesday, February 20, 2013

I don't feel qualified to answer either of those questions very well, and it's hard to think of a method other than putting your whole family into a situation (e.g. missions) where you have to speak French! Next best would be either finding a French-speaking friend to come visit and speak French to you, or finding DVDs or software (or watching a lot of French TV, if you can get a French station). Obviously the software choices can run from inexpensive (the Teach Me French series, little songs etc. on CDs) to very expensive.

But I do have one suggestion. Right now, this very minute, on the Amazon Kindle store, there's a free book called 52 Weeks of Family Spanish, by Eileen McAree. It looks like it has lots of ideas, such as trying to use a second language at mealtimes. If it's still free (or reasonable) by the time you read this, it might be worth checking out just for the inspiration.

I must have just missed out on the free book. Thanks for the other links.

My Spanish used to be lacking but I am making progress! I find it very helpful to focus on the ear first and to get a headstart before lessons begin with your students. That way, if you make mistakes, it will only affect you.

Mama Snow, I love how we both posted links to the books Mason used for French on our blog carnival posts on the subject!