What homeschoolers do with birdseed (besides feed it to the birds)

This is Crayons' current science project, from the "Changes" unit in Herb Strongin's book Science on a Shoestring. 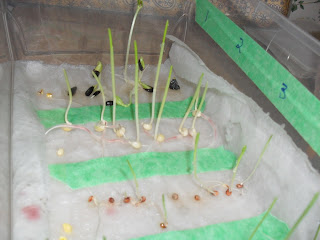 Method: Sort out the birdseed so that you have about ten seeds each of as many different kinds as you can find in the package. (We used sunflower seeds, milo, and millet, and added popcorn as a fourth type.) Line the plastic container with dampened paper towels, and divide it into sections with tape. Arrange the seeds in rows in each section. Put the lid on, dampening the paper towels again if and when needed. (According to the book, some mould is to be expected.) 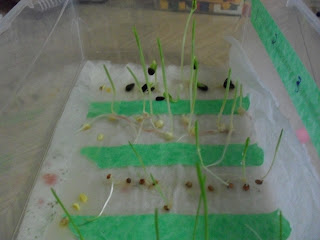 And watch them grow, keeping notes on your observations. We started them on Tuesday and they were sprouting by Thursday; by the time we took these photos, the tallest sprouts were 10 cm (4 inches) tall. Since then they have grown even more, some of the sunflower shells have dropped off, and the popcorn sprouts have divided in two. We also noticed that the sunflower seeds went up with their sprouts, but the other seeds stayed on the paper towels closer to the roots. 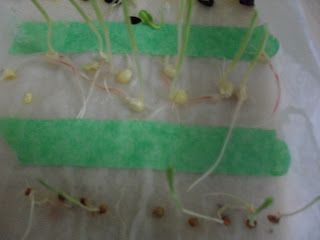 I'm not sure how much longer we'll be able to keep the sprouts going; several of them are getting taller than the box, and there is some mould growth around the roots and around a few of the seeds that didn't sprout. But it has been very interesting. 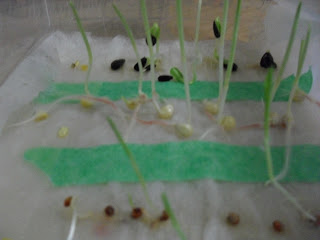 Photos by Ponytails
Posted by Mama Squirrel at Thursday, October 21, 2010