Here is an early Christmas present for Treehouse readers.  This year's quiz just may be the hardest yet...or it may be the easiest, depending on what books you've read!  Answers are here.

1.  Anyway by midwinter [they] had come all the way back, along both edges of the Forest, to the doors of B----'s house; and there for a while they both stayed.  Yuletide was warm and merry there; and men came from far and wide to feast at B----'s bidding.

2.  She had suggested they open their gifts on Christmas evening in front of the fire, dressed in their favorite robes.  Thank heaven her gift had arrived--and already wrapped, into the bargain.  He'd had it delivered to Dora Pugh at the hardware, in case he couldn't be found at his office to sign for it.  It was all too easy, he thought.  Just call toll-free and talk to someone solicitous and give them a credit card number.  It seemed a man should suffer a bit over what to give his beloved.  Next year, he would do better.

3.  There were several parcels wrapped in white tissue paper, and one very large box with the inscription: "For Fräulein M----- for Distribution."  Surrounded by the children I unpacked it, and out came eight pairs of woolen mittens, eight beautiful, soft, gray Wetterflecks, and eight pairs of heavy boots.  This was a great surprise, and with a guilty heart, I hardly dared look at Baroness Matilda.  But tonight was Christmas, and, shaking a finger at me, she only laughed. 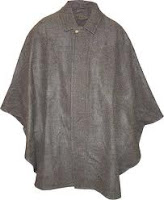 4. "Just suppose Mrs. Beck had had to bring him up!  What would he have been like?"  "She wouldn't!" said Rand.  "She'd have put him out on the doorstep...We must take great care to bring him up to know the Lord.  Dale, I'm going to start in this Christmas Day telling him all about it!  I'll tell him the story of the angels and the shepherds and the wise men, and the Christ who came and lived and died for him!  I'll begin right away and I'll keep it up day after day.  He's not going to able to say he never heard the truth."  "George, how perfectly absurd!  As if a baby like that could understand words!" said Dale with a tender smile.  "Well, he may not be able to understand words," said Rand stubbornly, "but he's learning them all the time, and somehow he finds out what things mean."

5.   The window looked into the courtyard and all there was to see was the windows, storey above story, of the rooms opposite.  On the gray Christmas morning it looked incredibly cheerless....While the maid was getting the logs he dressed himself, and then, when she got busy setting things to rights, he sat down and looked at the grim courtyard.  He thought disconsolately of the jolly party at the Terry-Masons'.  They would be having a glass of sherry now before sitting down to their Christmas dinner of turkey and plum pudding, and they would all be very gay, pleased with their Christmas presents, noisy and jolly.

(Good gracious, we definitely need something more cheerful after that one.)

6.  "A tree should have tinsel," said Mrs. Jones.  She bought some tinsel.  "And candles," she said.  "Candles are prettier than electric light."  She bought twelve red candles....And a tree should have some balls, thought Mrs. Jones, glass balls in jewel colors, ruby-red, emerald-green, and gold.  She bought some balls and a box of tiny silver crackers and a tinsel star.  When she got home she stood the tree in the window and dressed it, putting the star on top.  "Who is to look at it?" asked Mr. Jones.  Mrs. Jones thought for a moment and said, "Christmas needs children, Albert."  Albert was Mr. Jones's name.  "I wonder," said Mrs. Jones.  "Couldn't we find a little girl?"

7.  Imogene had the baby doll but she wasn't carrying it the way she was supposed to, cradled in her arms.  She had it slung up over her shoulder, and before she put it in the manger she thumped it twice on the back.  I heard Alice gasp and she poked me.  "I don't think it's very nice to burp the baby Jesus," she whispered, "as if he had colic."  Then she poked me again.  "Do you suppose he could have had colic?"

9.  Santa Claus appeared to be rather doubtful.  But Harold confidently went to work lining up the reindeer.  Soon Prancer and Dancer were pawing at the snow, eager to be off around the world.  Harold wasn't quite certain of the names of the other reindeer.  But he made sure there were eight of them.  They were all handsome and spirited animals.

10.  It was past Vespers on Christmas Eve before C------ had time to make a brief visit to the town, to spend at least an hour with Aline, and take a gift to his two-year-old godson, a little wooden horse that Martin Bellecote the master-carpenter had made for him, with gaily coloured harness and trappings fit for a knight, made out of scraps of felt and cloth and leather by C------ himself...."I can stay no more than an hour," said C------, as the boy scrambled down again to play with his new toy.  "I must be back for Compline, and very soon after that begins Matins, and we shall be up all the night until Prime and the dawn Mass...."  When he noted the sand in the glass and rose to take his leave, he went out from the hall into the bright glitter of frost, and a vault of stars now three times larger than when first they appeared, and crackling with brilliance....This night, the eve of the Nativity, hung about the town utterly still and silent, not a breath to temper the bite of the frost.  Even the movements of such men as were abroad seemed hushed and almost stealthy, afraid to shake the wonder.

Answers will be posted when we get a good snowfall.  UPDATE:  I didn't mean that quite so literally...it started snowing the evening after I posted this, and we woke up with enough snow to shovel.  But you'll still have to wait for the answers.
Posted by Mama Squirrel at Friday, November 23, 2012

Three, I think, but I need to open the 'Basket of Delights' to make sure that I'm not totally and embarrassingly wrong. Back on Monday.

7. The Best Christmas Pageant Ever

Queen of Carrts: all right!

I know I'm late, but I haven't looked at your answers yet.

6. Definitely feels like a Rumer Godden book. Holly and Ivy?

7. The Best Christmas Pageant Ever

9. Harold and the Purple Crayon Visit the North Pole (or something of that ilk)