Minimalism and the world of Charlotte Mason (last of three)


"Guard the nursery; let nothing in that has not the true literary flavour; let the children grow up on a few books read over and over, and let them have none, the reading of which does not cost an appreciable mental effort." ~~ Charlotte Mason, Formation of Character

These three photographs show almost all the books I currently own. I used to have a lot more, although, to be fair, a large percentage of those were for the children, and we had more than the usual number of those because we homeschooled (Charlotte Mason's cautions notwithstanding). So it's easier to keep fewer books now. But to quite a few minimalists, this would be a ridiculous number of books. To some minimalists, any paper books, especially those you intend on keeping, are too many. 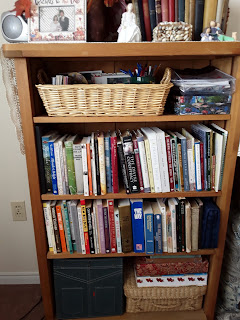 I, obviously, object profoundly to the idea that my reading life would be just as satisfying if I gave away every book when I'd "finished" it, or if I read only e-texts. As to the second, there are plenty of books that have never been digitized, or that just work better on paper. (Large art books, for instance.)

As for the first, Charlotte Mason said herself that the best books are never really finished. 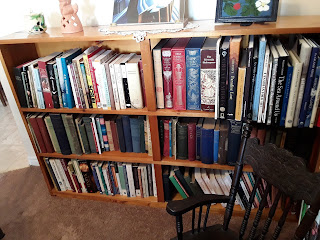 As a thrift-store volunteer, I agree that, in some ways, there are too many books out there, or rather, too many that aren't of much value. As with any too-large pile of objects, the treasures get swamped by the dreck. I don't think everybody needs a personal forever-copy of every classic, any more than every woman needs a pair of black pumps. Good libraries are our friends! But I do think that minds are fed, imaginations are awakened, and rooms are made warmer by a chosen, cherished collection of spark-joy books by favourite authors. 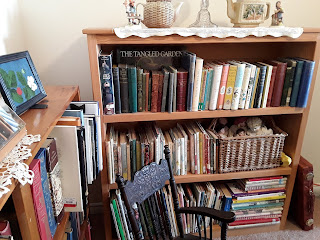 So, yes to minimalism that allows us to major on the majors; but no to bare (or non-existent) bookshelves!
Posted by Mama Squirrel at Thursday, January 31, 2019