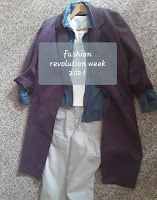 This is Fashion Revolution Week, hosted by FashionRevolution.org.

First, a bit of an "imaginary heroine" story from The Vivienne Files:

"She returned [from her vacation] to a madhouse. Drinking at lunch, crying in the bathrooms, shouting in the halls – it had all of the elements of a bad soap opera, without the romance…

"So she decided that it was finally time to take over.  She’d considered it before, but wasn’t really all that interested in management. But when she saw how absolutely miserable her co-workers were, she started to plan."

Do you notice something that's not going on in that office?  The drinking, crying, shouting employees aren't doing anything to improve the situation, no matter what their qualifications or skills are supposed to be. As the story continues, the heroine assumes the role of ad-hoc manager by managing.

Here's an older story: the 1921 novel Re-Creations, by Grace Livingston Hill. During her senior year of college, Cornelia is called home due to family needs. At first she is annoyed, but then she realizes how desperate things have gotten and how badly the household needs someone to take on an adult role. (The mother has been hospitalized, apparently from overworking and undereating.)

"It was no use whatever to sit here and cry about it when such a mountain of work awaited her. The lady on the train had been right when she told her there would be plenty of chance for her talent...At least things could be clean and tidy. And there should be waffles!"

What needs to happen to make this family's world better can only be done by doing, and Cornelia has to be the one to get the ball rolling.

So what are we talking about here? Bossing people around? Washing sheets and making waffles? Not exactly...more like...if the mess is all around you, don't wait for somebody else to clean it up. If you have people around you, of any age or relationship, you're modelling behaviour for them, like it or not.  So start somewhere. Stay calm. Use your talents. Make a plan.

Act (and, if necessary, dress) to show you mean it. In the case of the Vivienne Files heroine, getting people to take her seriously meant dressing up; but for Cornelia, who had a house to scrub down, dinner to cook, and curtains to stencil, it was the opposite.

Ask for help and co-operation, but make sure your helpers get waffles (or pizza, or whatever).

And what might this have to do with Fashion Revolution Week? Simply this: if you're troubled by little or big problems (like fast fashion), decide to be part of the solution; and then do something to show that you mean business.

What happens when someone takes this advice to heart? Part Two will be posted on Tuesday..