A Pie That Really Schmecks

(This post is part of the Day that Really Schmecks blog round-up, in honour of the late author Edna Staebler and the reprinting of her first cookbook, Food That Really Schmecks, by Wilfrid Laurier University Press. The round-up is hosted by Jasmine at the Cardamom Addict blog, and will officially take place on January 15th. Thank you very much, Jasmine and WLU Press!)

I first saw Food That Really Schmecks in our school library when I was twelve or thirteen. I’m not sure what relevance the librarian thought it had for seventh and eighth graders, but I found it on the shelf and wanted a copy of my own. Like Edna’s, my own background was a hodgepodge of Waterloo County (Ontario) cultures. Like Edna, I had some pioneering Mennonite great-something-great-grandparents. And I grew up in a community that reflected not only the historical side of Edna’s cooking (the bean salads and elderberry pies) but what I think of as the Church Lady side of her food: potluck suppers; bazaar baking and fudge-making, and tables of chili sauce and rhubarb jam for sale; church card parties and strawberry socials.

I did get a copy of the book, along with More Food That Really Schmecks which came out right about then as well. And I cooked and baked a lot of those recipes over the years: cookies, breads, pies, even a few of the oddities like Wieners and Buttons.

Edna and my grandma were about the same age, and much of the food in that 1968 book could have come right out of Grandma’s kitchen. I’d never seen a recipe written down for noodle potpie (Edna called it Hingle Potpie), which Grandma passed on to us as a kind of kitchen art form, showing us how to drop the noodle dough in just where the chicken broth was boiling, and lamenting that her noodles weren’t thin enough to have passed muster with her own grandmother. (Mr. Fixit’s Schwabian grandmother made a similar chicken dish with homemade noodles she called Flekele.) 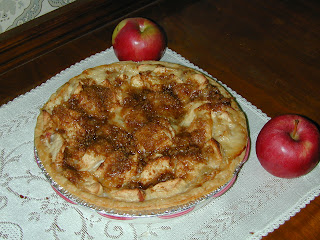 Grandma also made pies—strawberry, elderberry, and Dutch Apple. I’m still trying to define what makes a Waterloo County Dutch Apple or Schnitz pie different from any other recipe (and it’s not the same as the Dutch Apple pie Wikipedia describes). Edna includes at least three different recipes for Schnitz Pie in her book, plus another simply called “Dutch Apple Pie.” Our Dutch Apple is a single-crust pie, and I think it’s richer than “regular” (double-crust, all-American) apple pie. Grandma’s version is pretty close to Edna’s “Cream Schnitz Pie,” although I don’t have exact amounts, just my mom’s description of how to make it. The version that I make myself (usually when I can get really good apples in the fall) is her “Cream and Crumb Schnitz Pie.” Both recipes are included here with permission from the publisher, as part of this blogging event.

[The recipes are typed as they appear in Food That Really Schmecks, including the WOW! at the end. I’ve include a couple of family notes in the Cream Schnitz version.]

Combine ¾ cup of the sugar, flour, salt and the cream and beat until smooth. Peel and core the apples, cut them in schnitz [slices] and arrange prettily and closely in the pastry shell. Pour the cream mixture over the apples. [Grandma's method was slightly different; she mixed the dry ingredients and sprinkled most of them in the bottom of the crust; added the apples; and then said to “pour just enough milk so you can see it coming up over the apples.”] Mix the remaining ¼ cup sugar with the cinnamon and sprinkle over the top. Bake at 425 degrees for 10 minutes, turn heat to 350 degress and bake half an hour till the apples are soft and the filling is set. Watch it. [I assume Edna meant to watch it in case it burns, but my mom reminded me that you should also watch this kind of pie because it has a tendency to bubble over a bit and make a sticky mess in the oven. She recommends putting a cookie pan or foil underneath to catch any drips.]

“If you want to have it both ways [cream and crumbs], try this one.”

Mix butter, sugar and flour into crumbs. Sprinkle half in the bottom of the shell. Peel and core the apples, cut them in schnitz and arrange them on top of the crumbs. Mix half the remaining crumbs with the cream and pour the mixture over the apples. Finally, mix the cinnamon with the rest of the crumbs and sprinkle these over the top. Bake at 425 degrees for 10 minutes, then at 350 degrees for about half an hour. WOW!

I met Edna Staebler once or twice at book signings, but it wasn’t until 2002 that I wrote to let her know how much her cookbooks had meant to me. I was delighted when she wrote back, in a note that sounded like she was still very much herself—“at almost 97.”

“3:44 a.m., Nov. 22. Thanks for your wonderful letter about my Schmecks books—it is so enthusiastic and well expressed. Twelve hours ago I had a molar extracted, it is very painful and I can’t sleep—your mention of hingle potpie and all the other things you enjoy makes me hungry. I’ll be sipping nothing but soup for awhile—Fortunately I have friends who kindly bring me some they have made & frozen.

“Keep eating well as long as you can. At almost 97 I must be more cautious—but I’m lucky and [grateful?], & will eat heartily when the tooth heals.

“Sorry to tell you all this.

I just read your letter over again, it makes me feel better to think of all those good things to eat. Maybe in a few days----Edna Staebler.”
Posted by Mama Squirrel at Wednesday, January 03, 2007

I agree with Tim's mum--absolutely lovely!

Thanks so much for participating.

wow, it looks yummy! I'd love to have a little piece for breakfast now :)
Happy cooking,
M

I and my sisters were looking for an "Apple Cream Pie" recipe that our grandmother used to make that came from Germany. No one had the recipe, but we think this is it. Thank You for sharing!
L

These look 'really' good but I thought a Schnitz pie was made with 'dried' apples. Does it tast the same if they're 'not' dried?
Debbi D.

Debbi, these apple pies may originally have been made with dried apples (in the winter), but the recipes as published in Food That Really Schmecks assume that you have fresh apples. You could experiment with dried apples, though.