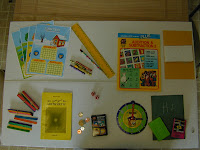 Mr. Fixit took this picture awhile back to show what a very inexpensive math curriculum might look like. Almost everything in the picture was bought at yard sales or was just found around the house, including the calendars, the chalkboard and the cardboard clock which all came out of a "play school" kit. (The file cards--for homemade flash cards, game cards and rod tubes) are sitting on the brown envelope only so you can see them.) Using Ruth Beechick's Arithmetic booklet (the yellow one) and the basic supplies there, you could cover most first grade math topics, with a little imagination. Cathy Duffy wrote a sidebar about that too in one of her Curriculum Manuals.

But after ten-plus years of homeschooling, you tend to end up with a lot more "stuff" than that. I made a list this weekend of what we have that Crayons could use for next year's Real Grade One Math. (We also have access to a whole world of mathematics books, games, blogs, lesson plans and more through the public library and the Internet--but you can't count that, can you?) I've sorted it more or less by category:

Official Math Stuff: Miquon Math teacher's manuals and workbooks. Developing Number Concepts Using Unifix Cubes (yard sale treasure ten years ago, but it took me years to find some Unifix cubes to go with it; we used Duplo instead). A Calculadder set for drilling facts (although we don't drill much at this level). Miscellaneous yard-sale workbooks, although most of them aren't at a grade 1 level.

Other math books: Mathemagic (from the Childcraft series), Family Math, Teaching Children (for a scope and sequence), Ruth Beechick's booklet, and a book called How is My Second Grader Doing in School?, which isn't for first grade but is quite useful anyway. (That's where I found the evaluation exercises I used last week.)

Manipulatives: a plastic shoebox full of Cuisenaire rods (4 74-rod sets plus a sandwich bag full of ancient thrift shop rods), one set of base-10 blocks (teacher's yard sale) , a set of linking cm cubes the same size as the units in the base-10 blocks, a small set of Unifix cubes (same yard sale) and a small set of larger linking cubes (same yard sale). A homemade abacus, although we don't use that really until later. Miscellaneous pegs and beads, Lego and Duplo blocks. Coloured popsicle sticks (those are popsicle sticks in the photo, not Cuisenaire rods. Just watch out for splinters--ask us how we know). The rubber numeral tiles from a Scrabble-type game called Ready or Not.

Hundred Charts: several including our homemade Velcro-poster board masterpiece. Also the 1-100 Activity Book from Learning Resources. (Good for games.) 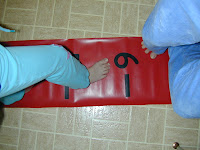 Geoboard: we don't have one, so we use an upside-down Discovery Toys Giant Pegboard and a bag of rubber bands. (There are a few geoboard activities in the Miquon First Grade Diary.)

Miscellaneous pieces of paper with numbers on them: bills, maps, newspapers and catalogues.

Commercial board games (and all their pieces, dice, play money, rubber tiles): Monopoly Jr., Ludo, Snakes and Ladders, checkers, Chinese checkers, Sorry, Battleship, Can't Stop, and a domino-like game that I think was called Make Tens. The Klutz Book of Classic Board Games--which is a pouchful of small black and white pebbles and a set of boards to play games like Mancala and Nine Men's Morris. Miscellaneous dice, dominoes and cards for made-up games.

Homemade felt board, scraps of felt and construction paper, and yarn. Why yarn? Because with a few paper or felt circles and a piece of yarn wrapped around the middle of the felt board, you instantly create a giant domino, which is very useful for showing more/less, odd/even, or adding the dots on one side to the dots on the other side.

A calendar, and Calendar Math from Creative Teaching Press.

Plastic fraction wedges from the dollar store--just the half and quarter sizes for Grade One. 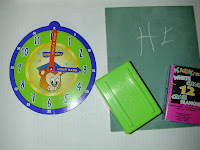 A toy clock (and real clocks.)

And a few geometric things to play with (some of which Crayons won't really get into until she's older): half a set of pattern blocks (bought from a friend), a tangrams set, and a set of logic blocks (Logix) that belongs to Mr. Fixit.

Uhm, you win! But my youngest is now 10, so we don't need too many things beyond a ruler right now. And if anyone ever doubts you're a true homeschooler, just show 'em your math cupboard. :-)

We seem to have a lot of math stuff for this age, but most of it didn't cost much money--it's just stuff we've accumulated.

ya, the math is always very interesting and can be easily practiced with all math topics...