Toss, Keep, Sell!: The Suddenly Frugal Guide to Cleaning Out the Clutter and Cashing In, by Leah Ingram.  About $US10 on Amazon.com, in either paperback or Kindle format.  (I borrowed a copy from the library.)

Over the last two or three decades, I have read a lotta, lotta, lotta clutter and organizing books.  Some inspired me to get busy and do something; some were interesting, some were boring.  Some had good ideas, and a lot were the same old stuff.  Recently I've downloaded several free Kindle books about organizing, home management, and clutter, and most of them are the same old stuff.  One of them might grab you at the right moment and become your friend, but really there isn't much new to say about "toss what you don't need, organize the rest."

So I know I've found a keeper when a) I enjoy reading it and b) I actually get a couple of new ideas that c) work.  Someone named Books and Chocolate already reviewed Toss, Keep, Sell! on Amazon.com, and that's pretty much what they said, too.  There are a few ideas I couldn't exactly relate to, like making money reselling Tiffany and Prada stuff that you might have gathering dust (??), but overall I liked her ideas, particularly about re-purposing unused items in other rooms.  Of course we've done that lots of times, but reading the book sparked a couple of new ideas I hadn't thought of before.  Yesterday I did some cleaning out in our dining room--not where we eat all our meals, this is more of a space where we have holiday dinners and sew and do homework in between, so it gets messy.  I cleaned out the buffet, got rid of a couple of old tablecloths and a bunch of polyester napkins that we never use, and realized that I could use the built-in cutlery tray in the top drawer for our good cutlery. 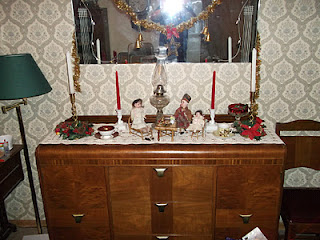 Why I never thought of that, after living here for almost fifteen years, I don't know, but I had always kept the "good" set of cutlery (wedding gift) in a wooden box (wedding gift) on top of the china cabinet.  But the knife holder had broken loose inside the box, and half of the good cutlery had migrated into the everyday drawer in the kitchen anyway because we were short on spoons.  So...short end of the story...the good cutlery, what we don't need for every day, now lives in the buffet.  Which gave me a nice empty wooden box...which was twice the size of the small jewelery box I'd been stuffing my beads and earrings into for years.  So now I have a bigger jewelery box, and Dollygirl has my old box since she didn't have one at all.  Everybody wins, and the top of the china cabinet is suddenly clear too.

The format of the book is room-by-room, which is pretty typical.  But I think what it sets it above the norm are the personal examples and the sum-it-up charts, as well as the up-to-date suggestions such as using Craigslist and E-bay.

So...this is a new addition to my short list of favourite clutter/organization books.  (Others are It's Here...Somewhere, by Alice Fulton, and Don Aslett's For Packrats Only.)
Posted by Mama Squirrel at Thursday, August 02, 2012