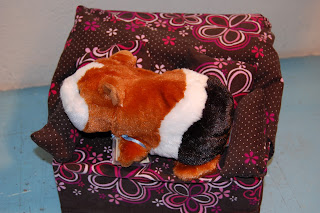 Dollygirl's 18-inch dolls have lots of clothes, but they're short on furniture.  To help them out, I made this oversized chair, or sofa--depending on how many dolls (or guinea pigs) are squeezed onto it.  It requires a bit of sewing, but no gluing or nailing.

Start with one rather old hinged-lid chicken wings box, or anything else of that sort.  If you don't have an old hinged-lid chicken box but do have a box with its own lid, about the size of a child's shoebox, you can tape the lid to the back of the box and use that.
Add one cut-down cereal box, stuffed with newspaper.  The cereal box needs to be the same size as the first box.  Stuff it inside, tightly.  Or you could just stuff the first box and then cover the seat with a piece of cardboard.

Now you have something that resembles a bed with a bookcase headboard.  Stuff the "bookcase" part with more crumpled newspaper.

Now it's time for some cutting and sewing. Take a child-size skirt, or the equivalent in other fabric. (Dollygirl had an old corduroy skirt she'd grown out of a  long time ago.)  Sew it into a tube that will fit nicely around the box.  When you slip it over the box, it should give you almost, but not quite, enough fabric to completely slipcover the sofa.  Sort of like a fabric tissue box cover, or a tea cozy.  It doesn't have to be perfect, because you're going to make a second piece to fit over the top.

Here is the second piece of fabric (photo below).  I don't know how well you can see this in the photo, but I hemmed around the bottom and also wrapped it around and sewed in two places, making two corners that stand up.  It's not mandatory, but I thought it gave the top piece a better fit.

Now you slip that piece over the back of the sofa, tucking it in behind the seat.

If you have any fabric left, you can make cushions for the sofa. I made two tube-shaped pieces that work as arms for the couch, and two square ones. I machine-sewed them, leaving one side open; stuffed them with quilt batting (you could use any kind of stuffing), and hand-sewed the last side of each. 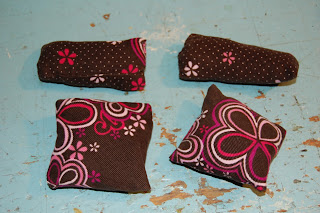 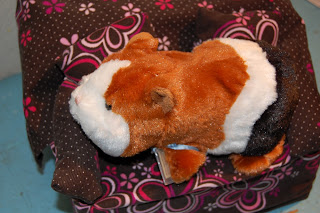 Linked from Mad Skills Link Party #118 at Mad in Crafts, and from the Festival of Frugality.