Found for $2: a new-in-box set of Kangaroo Keepers. Commercial: "Do you have a messy purse like this? Buy the Kangaroo Keeper and your life will be perfect!"

According to several You-tube reviews, the KK doesn't really live up to the commercial; it's not as big as it looks on the box, and its pockets are also small. And yes, as the reviewers note, it does have a bit of a shower curtain smell. Nobody else suggested this, but it seems to me that clear or coloured pockets instead of black ones would better keep small things from being misplaced. Some of our brains function better with a bit of colour-coding. 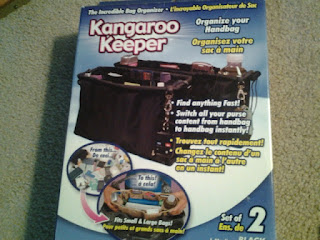 But for $2, I think I can find some use for these bags. They could work for toiletries, or office supplies, or crochet tools, or as travel pouches (ignoring the pockets). They do pull  closed with drawstrings, although I found you have to pull pretty hard on the larger one, and it still doesn't close completely.  But maybe they could be used for carrying snacks and lunches, inside a larger bag. I'm thinking mini ice packs stuffed into some of the small pockets. 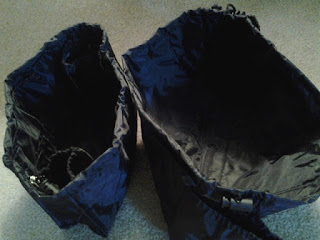 For something where you're storing a bigger piece along with some little pieces or attachments--the KK's might work well.

And it's probably a better idea than trying to organize your purse with them.

UPDATE:  A way to use the larger organizer: as an in-drawer keeper for hairbrushes and that sort of stuff. I think I'll use the smaller one for some pens, sticky notes, and the little notepad I use to write school "please excuse" notes. 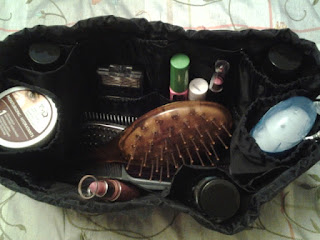 UPDATE #2: I decided to keep my pens in their basket, and use the smaller pouch inside my tote bag. Since it has a clip on it for keys, I was able to hook it onto the bag's zipper pull. (You could also fasten a loop inside the tote bag.) The reviewers complained that the KK's weren't really big enough to organize all the stuff people carry around, and that's true; but even the smaller one is enough to hold a few basics that otherwise have to swim around inside my tote.

So there you go. 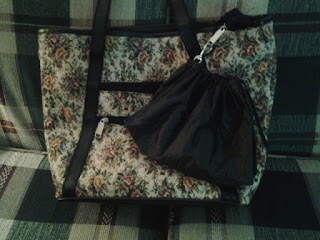 Email ThisBlogThis!Share to TwitterShare to FacebookShare to Pinterest
Labels: Frugality, homemaking, organization, stuff, too much stuff, what's in your hand, Yard sales