We have found ourselves a new Treehouse.

It's much, much higher up, in a much taller tree. But it's big enough for three Squirrels and a guinea pig. (Among the multiple forms we signed was one asking for Muffin's name and what colour he is. Maybe I should have filled one out for Dewey, too.)

Most of the other details are...still up in the air.

But we do have the keys. Prettiest thing I've seen in a long time. 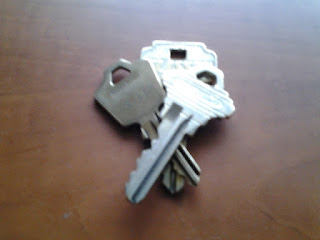 Sounds like you got yourselves a condo! Hope you enjoy your new digs!

Oh, so happy for you! I know you've been waiting a long time for this. ♥

Thank you all for the good wishes!