You could still make one (Towel Snowman)

Do you want to build a snowman?

This video shows you how to make one from a hand towel or large washcloth. The on-screen descriptions are in Spanish, but it doesn't matter: it's pretty clear what you need and how to do it.

Here's my snowman, made from a white hand towel, recycled scarf fabric, sticky felt eyes and buttons, and an orange felt nose glued on with just a dot of glue. The one little change I had to make was that my towel was a slightly different shape from the one in the video, so I had to fold in one end a couple of inches first. But it worked fine after that. His head is looking a little squished in the photo, but you just have to play around with it a bit to get it to puff out properly.

(Warning that should be obvious anyway: this isn't meant for very young children who eat things.) 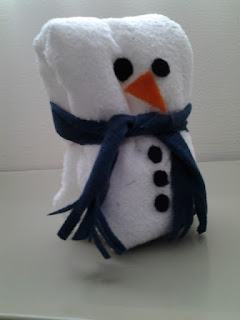