Wednesday Hodgepodge: The Cream in my Coffee

It's the Wednesday Hodgepodge! Answer the questions on your own blog then hop back to From This Side of the Pond (click the graphic) to share answers with the rest of the world.

1. When is the last time you experienced nostalgia?
Probably a couple of days ago when we visited an outdoor flea market.
2. September 29th is National Coffee Day. Do we need this? Ha! So are you a coffee drinker? If so how many cups per day, and tell us how you like it. Is there a recipe you enjoy that calls for coffee as one of the ingredients?
In spite of the fact that I love teapots, I am more of a coffee drinker. Those who believe in nature would say that it seems to run in my family. On the nurture end, I spent my early years living around the corner from a Tim Horton's doughnut shop (when there were less than ten in existence), so maybe that counts for something.
One of my favourite holiday recipes was originally called Coffeeberry Loaf, but it doesn't have any coffee in it. I sometimes use coffee as the liquid in chocolate cupcakes. We made these Cappuccino Thumbprints a few times for special occasions. 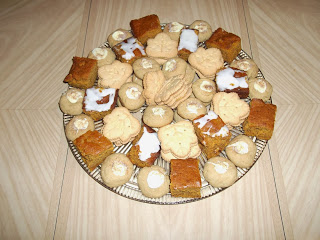 If you missed the National Coffee Day, it appears you can still enjoy International Coffee Day on October 1st. Looks like we just can't get enough coffee commemoration.
3. Do you find praise or criticism to be more motivating? Explain.
Not sure about that. Praise is, obviously, less painful. It would depend on where the criticism comes from and if it's based on something real and/or something I have any control over.
4.  What's a television series you keep coming back to and re-watching?
When we were at the flea market, I bought a copy of this 1996 tribute to PBS Mystery. We have watched a LOT of those shows over the years, but there are some others in the book that we've never seen. One page of the book shows a list of episodes by season, and Mr. Fixit thinks it would be interesting to start at the beginning (in 1980) and watch through them all in order (to 1996), at least the ones we can find, which would mean starting with She Fell Among Thieves and probably working through a lot of Rumpole of the Bailey before getting back to Inspector Morse and the final Sherlock Holmes episodes.. Last night we watched one from the Partners in Crime miniseries (Agatha Christie's Tommy and Tuppence). 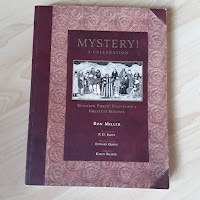 5. As the month of September draws to a close give us three words to describe your mood.
It feels slightly profane, though not untruthful, to make it "Come Lord Jesus."
Something less heavy?
"Stay Sidelined, Snow." Hoping for some good October weather.
Linked from The Wednesday Hodgepodge at From This Side of the Pond
Posted by Mama Squirrel at Wednesday, September 30, 2020

I agree with both of your 'three words'. That snow stuff--don't come. Lord Jesus, do come!
I love so many of the PBS series--Inspector Morse, James Herriot, Foyle's War, to name just a few.

I too enjoy PBS series As Time Goes By is a favorite of mine.
Great thought on the mood words. Thank you for sharing.
Sue

Your PBS viewing plan sounds like fun. We normally don't get snow here, and if we do it's short lived. Sometimes I miss the big beautiful snows, but only in December-January. After that I'm ready for milder weather again. Enjoy your week!