About a hundred dollars

The thrift stores re-opened here two weeks ago (again), so we've resumed our regular trips to look for stuff for Mr. Fixit to fix and other things just to use and wear and put on the table. Last week I found two wool/silk scarves for $2 each. The purple one is a pashmina, similar to a couple of others I own, but I was still not going to pass it up for $2. The other one also said wool/silk; it looked like a lovely sheer fabric in a denim-blue print. It also had a label that didn't mean anything to me. Until I looked it up this morning. 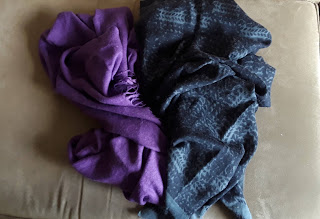 It turns out that it came from a boutique in Toronto that specializes in cashmere clothing. Scarves similar to that one sell for about a hundred dollars Canadian (about eighty U.S.).

Suddenly my scarf had a value attached to it. 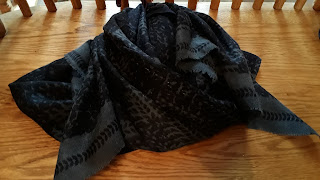 Canadian politician Pierre Poilievre recently made a video showing his attempt to buy something at a coffee shop for a quarter, and all he came away with was a stir stick. In a similar vein, about four years ago I wrote a post about trying to figure out the difference in perceived value between a thrifted top and a similar-fabric, similar-colour dress bought new from a "conscious" clothing firm. There was really no conclusion; I supposed that trying to make comparisons between them was apples and oranges.

Let's say that I put the scarf on (it's been a bit chilly) and we went out to drink coffee on the Tim Horton's patio. (Because we're still not allowed to sit inside.) Let's say that the wind blew the paper cup over, and the coffee spilled all over the scarf, undoubtedly ruining it forever unless some dry cleaner knows how to get coffee stains out of blue cashmere/silk. Has this just been my most expensive (hypothetical) coffee stop ever? Or did I only ruin something that cost me just slightly more than Poilievre's coffee stirrer; a scarf that cost exactly the same as a polyester one from the dollar store, so it wouldn't even be worth cleaning?

Let's say that I had gone shopping in Toronto, had stopped in at that boutique (it's near my aunt's house), had fallen in love with this scarf, perhaps had some gift money in my purse, and had decided to fork over the hundred dollars plus tax. If I had somehow then left the package behind on the train coming home, I would most certainly (besides kicking myself very hard) have gone to great lengths to track it down. Would I have done the same for a dollar-store scarf? Probably not so much. But what about this one, where paid-value is much much less than retail-value? Where does respect-to-the-maker (or even respect-to-the-animals) come into that? And, finally, what about stewardship? If God provided the scarf, should what I actually paid for it even be a consideration, in terms of wearing it, storing it carefully, keeping it safe from streams of coffee and unintentional train losses?

It's much the same question I asked that time I messed up a thrifted-but-originally-expensive skirt. Is the value of something based on how much or how little you paid, on its appraised or resale price, or on its usefulness or importance in your own life? 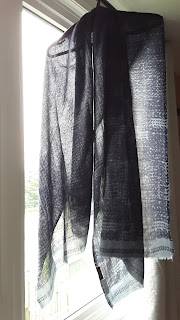 And if the answer to that is that we value all things equally because they connect us to the Giver...does that mean that a new two-dollar polyester scarf deserves just as much gratitude and care as one that inspires awe in me just for the mystery of how it can be wool and still let light through? Say if your kid bought the dollar-store scarf for you for Mother's Day?