Happy 5th Blogiversary to Us

And now the morning news with Mr. Koala (and his bag of milk)...

It was discovered that the tsunami resulting from the 2004 Indian Ocean earthquake uncovered an ancient city near the coastal town of Mahabalipuram in India.

A man was arrested by Gardaí in the town of Passage West in County Cork, Ireland, after he was discovered attempting to burn sterling bank notes.

The UK Food Standards Agency orders the withdrawal of over 350 food products from sale following the discovery that a batch of chilli powder used to produce a batch of Worcestershire sauce subsequently used to produce processed foods was contaminated with the possibly carcinogenic dye Sudan I.

And we launched Dewey's Treehouse! 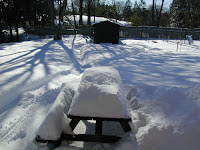 In the past five years we've had big messy snowstorms, big messy rainstorms, and one really big messy windstorm.

Our apple trees have gotten big enough to have real apples on them.

We've raked an awful lot of maple leaves.
We've also seen our Squirrelings grow much bigger, the Squirreling parents grow a few years older, and Dewey lose a little more of his nose. We've had some rocky times. We've had many reasons to give thanks.
We've won a Homeschool Blog Award, and some lovely reader-nominated ones.
We've made great blogging friends, even those we'll never meet in real life. 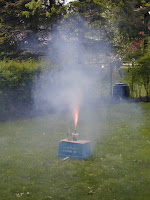 It's been a blast.

I would like to take this opportunity to present to you the Beautiful Blogger Award
because your blog is “beautiful”. Please visit this link for more details.

Congratulations and happiest of blogoversaries to you!

yay! congratulations, that's a big accomplishment for sure!

Happy 5th Blogiversary to all of ya! :-)

Many happy returns of the day!