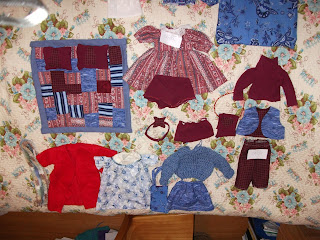 What did Crayons and Crystal get for Christmas?


Actually these clothes aren't just for Crystal; she has to share them with her "sister" Crissy, who's about the same height but slimmer.  A few of them will fit one doll better than the other. 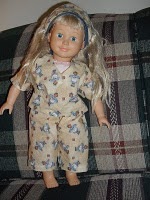 Crystal in the nightclothes we made her last year 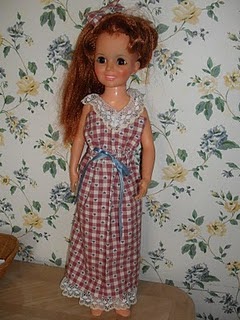 Crissy in a dress "upcycled" from a wine bag

Where did the fabrics come from?

Last year we bought a "grab bag" of co-ordinating red and blue fabrics at the mill-end store, for about $7.  Crayons used some of it to sew a pencil case, but the rest of it was still uncut.  We also had a nice thick red scrap of material from a church sale (perfect for a bathrobe), a piece of print material from a long-ago rummage sale (I had always thought it would make a pretty doll dress), and a burgundy t-shirt (one with a lot of stretch) that we found at the thrift shop just before Christmas.  Total costs for a doll quilt and pillows, tote bag, and several items of clothing?  Counting a spool of red thread and the stuff we had on hand like elastic and Velcro, I'd say it was under fifteen dollars.

Oh, and the batting for the quilt and the tote bag was a dollar-store "snow blanket."  It was thinner than regular quilt batting, just right for doll things. 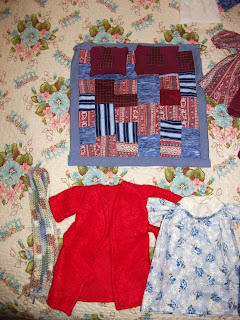 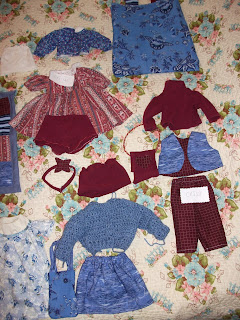 Where did the patterns come from?

Several of the things were made from patterns in Sew the Essential Wardrobe for 18-inch Dolls, by Joan Hinds and Jean Becker, found on the discard shelf at the library. (The print dress, the blue print blouse, the red bathrobe, the pale blue nightie, the burgundy turtleneck, the checked pants.) There are full-size double-sided patterns folded into the back of the book; I traced them onto tracing paper although they could be photocopied instead.  This book leaves out facings, giving all the blouses and dresses a full bodice lining instead.  In other words, you make four fronts and two backs, or four backs and two fronts.  It takes a bit more fabric, but does a neater job, and once you've made one piece like that, you understand how it works for the others.

Others came from Bunkhouse Books' Stitches&Pins doll clothes patterns that we bought for Crayons last year. Very easy to use, and some (like the skirt) don't even require paper patterns, just fabric cut to a certain size. From that package I made the reversible vest and an elastic-waist skirt.

The sweater pattern was found online.   (Not in the photo:  ice skates and mittens on a string.)

The tote bag came from Kids Can Press Quilting, by Biz Storms. Putting that together gave me the idea to use the last bits and pieces to make a patchwork quilt. I didn't have a pattern--just used some ideas I had seen in patterns for other doll quilts.

The hairband, small burgundy purse, burgundy shawl to go with the dress, burgundy miniskirt, crocheted scarf, and the mini version of the tote bag, I made up as I went along. The hairband was made from some of the binding on the t-shirt, with a fabric star fused on. 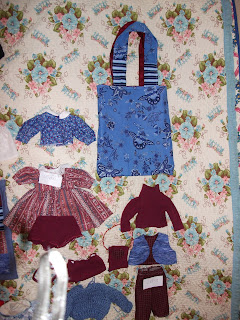 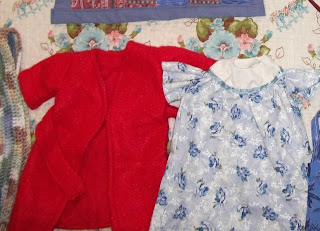 How did it all work out?

Mama Squirrel started with the bathrobe on a November afternoon when Crayons was out. If that hadn't worked out so well, she probably would have stopped there. But a bathrobe needs a nightie, and over the next while she worked on one.  That pattern did create some struggles...but she finally got everything gathered and the white yoke sewed on perfectly...and inside out. Not wanting to go back to the stitch ripper for the umpth time, she compromised and sewed ribbon around the raw edge. And that still could have been the end...except that, even with the nightie fight, she was having fun sewing. And Crystal did need some new clothes.  And we did have that bag of red and blue print fabric pieces. 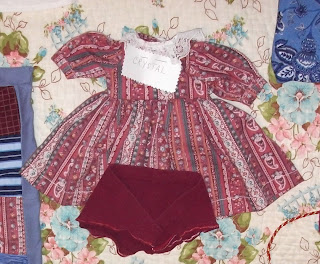 So we set things up in a bit of an assembly line.  Since there was a limited amount of fabric to work with, Mama Squirrel traced out some of the pattern pieces she thought she'd use, and pinned and cut them all at once, trying to match the largest pieces of fabric to the clothes requiring the most material.  Then it was just a matter of finding time and privacy to sew them, bit by bit.  Most of that happened in the last week of school (when the Squirrelings had a light workload and extra free time) and the week of holidays before Christmas (when it was quite acceptable for Mama Squirrel to say "OUT, I'm working on something.")

What kind of fastenings are on the clothes?

Mama Squirrel is not much into hardware.  The blouse, dress and nightie have Velcro closings.  The sweater has a button.  The shawl has a snap.  Everything else is pull-on. 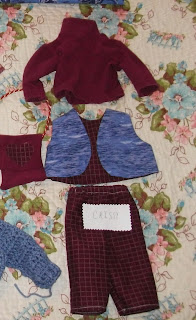 We thought the pants and turtleneck outfit would be groovy enough for Crissy. 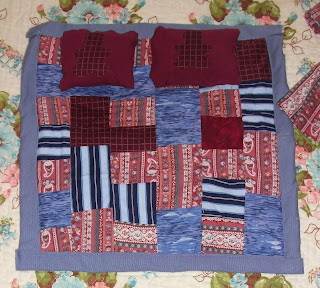 On Christmas Eve before bed, Crayons unwrapped the nightwear and the quilt and pillows.  The pillows are made from scraps of the t-shirt, with gingerbread shapes fused on for decoration.  The quilt top was made from rectangles and squares pieced together in strips, then placed on a square of snow-blanket for batting, and a piece of blue brushed fabric (long-ago remnant) cut 2 inches larger all the way around.  The backing was folded over twice towards the front of the quilt, and then top-stitched to hold the whole thing together.  It would have been fun to "tie" the quilt, but it didn't seem necessary. 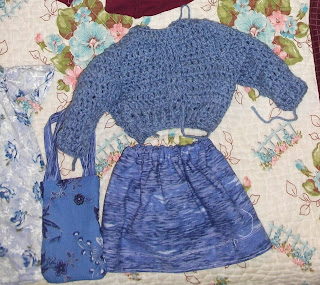 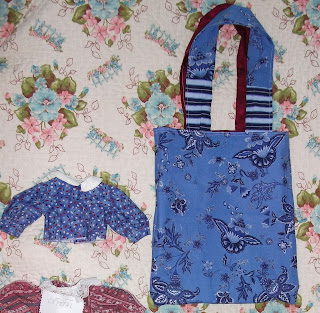 On Christmas morning, Crayons unwrapped the large tote bag which was holding the rest of the clothes.  It was made from one of the few pieces of grab-bag fabric which had a print too large for dolls, and there was another large dark red piece left for lining.  Because we were so close to the end of the fabric, the tote bag has one red handle and one handle made of two kinds of blue fabric.  But Crayons says she doesn't mind.﻿

This post is linked from the Festival of Frugality: Cheapest Man Alive Edition.
Posted by Mama Squirrel at Tuesday, December 28, 2010

What a darling wardrobe! It must be so satisfying to have used up all those scraps.

By the way (wink, wink) doll clothes are harder than people clothes.

I dunno...I find people clothes a lot harder to fit, and I worry more about making a mistake with that much more fabric! But I think these doll clothes would be good for new sewers to get the hang of how "real" clothes go together. They're a step up from "cut a hole in the middle of the fabric and tie it around doll's waist."

How cool and creative!

These are beautiful! Isn't it fun to sew for dolls? I do some people sewing: jumpers, dresses, a few tops for myself, PJ bottoms for the guys, and lot of patches and repair work for the guys, but sewing for dolls, for me at least, is so much more fun. It's like recreational sewing instead of chore sewing. This set is so pretty and creative and what lucky dollys to have such a nice new wardrobe. Thanks for sharing this. It makes me happy to see other people doing this sort of thing too. :-)

Oops, I forgot, if you want more Crissy Patterns (made just for her) you can find free ones at http://crissyandbeth.com/Sew.html. The Velvet ones work for AG or Springfield dolls if you enlarge them by 125 to 130%.