Two weeks into 2016, the weather has been a string of snowfalls followed by lots of shovelling. I don't ski or sled; my idea of enjoying winter is staying warm indoors.

On a whim, I downloaded the January decluttering calendar from Home Storage Solutions 101, and I've been trying to keep up with its 15-minute cleaning missions. That isn't necessarily a frugal thing, but it's a cleaning and simplifying one. It's also kind of positive when I get a string of things to declutter that already aren't cluttery. Dish towels? We could replace a few, but otherwise they're just folded in the drawer. Plastic wrap and foil? I had to restock rather than declutter those. Kitchen table? I know what she means, I've seen quite a few that could have used decluttering, but ours is usually bare. I'm sure she'll get me on some other point, though. I did clean out the plastic lids etc. (those accumulate fast), and we sent an extra casserole dish and some knives to the thrift store. 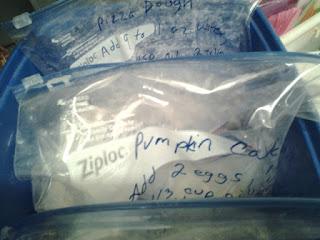 I got a head start on next week's cleaning-out-pantry-food missions by going through what we have, getting rid of a few things that had expired, and restocking the dry baking and soup mixes. I filled twenty plastic zipper bags with homemade muffin mix, pizza dough mix, lentil soup mix, a mixture of barley and brown rice that we use for Crockpot cereal, and so on. Again, it's not necessarily more frugal, but it does save measuring and cleanup.

We are all out of freezer meals (except for leftover chili that we're going to have tonight with a frozen pizza). I am hoping to replenish those soon.

We've kept on determinedly clearing stuff out and taking it to the thrift store. Drop-off trips usually also mean go-in-and-shop trips; we had one of those today.This is what I found: a purse for $3: 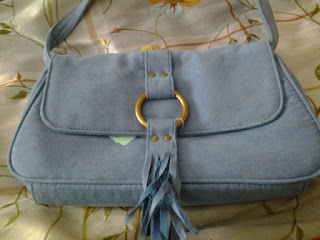 A short tan-coloured skirt for $1 (that's for summer): 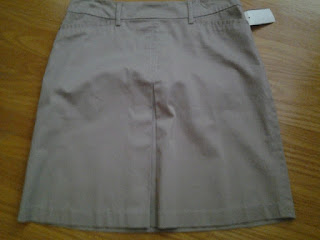 And a sweater dress for $5. It's a nice colour and I do like sweater dresses, but it's much too long (I couldn't even get the whole length in the photo. Here's what I did with it. On the subject of chopping and sewing, I'm still working on my Scrap Challenge. It's not going to be all clothes! 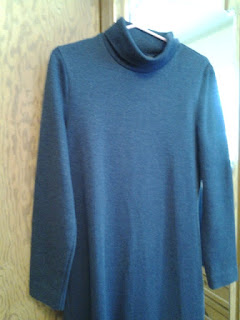 What I did to stay frugal: I did NOT buy any of the scarves they were featuring in the front of the store, and they had some really nice ones. But the purse, the skirt, and the dress were higher on the needs-list than just frou-frou. I'll do my frou another time.
Posted by Mama Squirrel at Thursday, January 14, 2016