Last summer I posted that I was sick and tired of wearing (mostly donated) black things and jeans. I went to the thrift store and randomly picked out a pile of bright summer clothes. 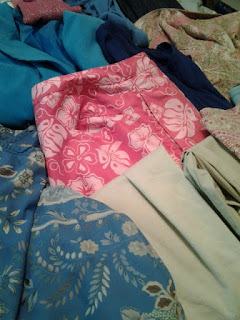 When the fall weather came, I fell back into the jeans uniform on weekdays, thrifted skirts or dress pants on Sundays. Life goes on no matter what you're wearing, and there are other things to focus on. It's a beauty-obsessed, consumeristic society, and who needs more of that?  Elizabeth Withey wore one dress for a whole year.

But change happens, and what's worked okay in past seasons of life sometimes just runs out of gas. I got rid of some clothes that I didn't like or that were worn out (including both my pairs of jeans), and then realized I had little left, and not much idea of what I did want to wear.  Project 333 says that nobody else really notices what you're wearing, and that may be true, but if your clothes are sending wrong messages to you, that may be enough reason to try something different.  Pondering your own path is not a bad thing, whether it leads you to 33 items, or 40 hangers, or one dress; or just remembering that you do have choices.

I realized that one reason for wearing jeans all the time was that I couldn't think of much else to put on the bottom of me. All my skirts were too long and fancy and...wool. I really like wool skirts. But you can't exactly wear office skirts around the house. I thought about how much I liked my stirrup pants and knits, way back, and a pair of purple suede desert boots...I have no idea why I got rid of those boots, maybe I just wore them out. I now own two pairs of jeggings (not the "excessive" kind, these are closer to pants), and I've thrift-sewed enough skirts and other things that I am really not missing the jeans. I have fewer clothes than I've ever had, but I have more that I can actually wear for the things I actually do.

Yesterday I packed off two final too-long, too-formal skirts, because I didn't need them, even shortened. So in honour of not needing to fix anything else, the only other photo I'm going to add this week is this (thrifted) necklace, which was paid for by selling a bit of the excess/outgrown from our bookshelves. (But that's another story.) 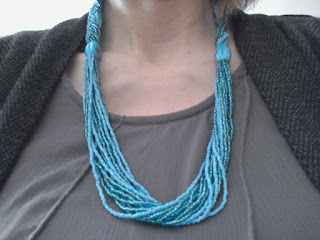 Beautiful necklace.
I'm also not wearing much black anymore, and it feels great.
I'm too off of jeans, and more into every day skirts and such.