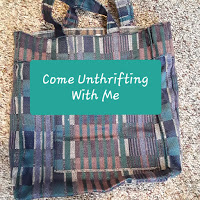 On the Vivienne Files website, there's been a theme over the past few months about planning smaller, shorter-term wardrobes. This was inspired by an idea in the book The Chic Closet by Fiona Ferris, but I think it's also symbolic of the past year, and particularly the current state of things: it just seems hard, sometimes, to visualize what you might be doing three or six months from now. A month at a time seems to be the limit of our attention spans, and it meets our craving for a bit of variety. That doesn't mean buying all different clothes; it might just mean re-organizing things better, or featuring clothes you haven't worn for awhile.

And right now, that works for me too. I did a page with a  blue and green January wardrobe, which could have been enough clothes-thinking for the whole rest of the winter; but this month I saw a new Vivienne Files story with lots of grey and pink, and that seemed fun for Valentine's Day, so I did my own version. 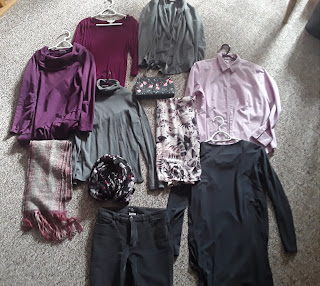 It reminds me a bit of Edith Schaeffer's advice that we need both treasured items in our homes (the things we look at and identify with our place and our family, like the Ingalls family's china shepherdess), and that we also need to be positive, creative, and even whimsical with whatever else we have. Over the past year, I've made a point of putting something out to be a focus on the dinner table, like candles or a pottery jug or a special ornament...or all three...but not the same things in the same combination every night. We really only have a few different table runners and cloths; our place mats and napkins, especially, are used over and over again, because we only have a couple of sets. But with different decorations added to the table, different combinations of candles, and maybe some paper napkins with a seasonal theme, it can still look cheerful and a bit more varied. Kind of like having mostly grey clothes with a couple of pink and purple sweaters and some pretty scarves.

In the council of the Achaeans, King Antiochus’ ambassadors being come thither, to move them to break their league with the Romans, and to make alliance with the king their master, they made a marvellous large discourse of the great multitude of soldiers that were in their master’s army, and did number them by many diverse names.

Whereunto Titus answered, and told how a friend of his having bidden him one night to supper, and having served so many dishes to his board, as he was angry with him for bestowing so great cost upon him, wondering how he could so suddenly get so much store of meat, and of so diverse kinds.

“My friend said to me again, that all was but pork dressed so many ways, and with so sundry sauces. And even so (quoth Titus), my Lords of Achaea , esteem not King Antiochus’ army the more, to hear of so many men of arms, numbered with their lances, and of such a number of footmen with their pikes: for they are all but Syrians, diversely armed, only with ill-favoured little weapons.” (Plutarch, Life of Titus Flamininus)

We are dressing the table for dinner at the weekends. It occured to us that we should be dressing ourselves up too. Love your Valentine theme cluster.