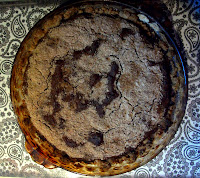 In Mabel Dunham's historical novel The Trail of the Conestoga, the Bricker family has just crossed the Niagara River after many days on the road from Pennsylvania.

"It's the Promised Land," cried Sam, laughing good-naturedly and swinging the water-pail. "Look once, there's the Jordan River,"—he pointed to the Niagara—"and back there's the wilderness. We was forty years in it, not?"  "It seemed so," thought Annie.

But John was determined to be literal. "Forty days, it was," he said, "forty days exactly, for I counted them. And what for a river do you think the Jordan is?"

"Too hungry to tell you now," replied Sam, refusing to be depressed by his brother's prosiness. "Come, Little Johnny, fetch the dishes, and me and you'll set the table. Got some shoo-fly pie, Annie?" 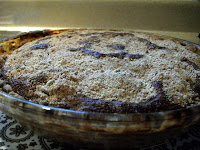 The table was a deal one of the drop-leaf variety, which folded into a tiny corner when occasion demanded but spread two broad, obliging wings at meal-time. Around it the little company gathered for their first breakfast in Canada.

It was when Sam was drinking the last draught of coffee from his saucer that there was borne in upon his mind the importance of this day in the history of the Bricker family. Even in old age they would recall this first morning in Canada and all the events which should transpire in it. He proposed that they should celebrate it in some appropriate way.... He told Little Johnny to set the benches in rows, and get out the Bible and hymn-book. He induced John to read the account of the crossing of the Jordan, and then they all knelt together and said "Our Father."

And how they sang! Sam started the tunes as well as he could, while John and Annie and even the children joined in. Soon the silent woods reverberated with the long-metered hymns....

At daybreak on Monday the journey was resumed. A corduroy road followed the course of the river, and this the Brickers took, trusting that it would eventually lead to the Mennonite settlement, which was said to exist somewhere along the shores of a great lake called Ontario.--Mabel Dunham, The Trail of the Conestoga

Photo of the Vineland Cairn found here
Pie photos by The Apprentice, October 2011
Posted by Mama Squirrel at Monday, October 10, 2011