Heirloom-quality tablecloths, candlesticks, silver spoons, fine bedcovers? I don't relate much to the particular home-making items that Edith Schaeffer recommends we acquire in Chapter 5.  A candlestick wouldn't necessarily make a hotel room "homier" for me (and do hotels allow you to burn candles in the rooms, anyway? I'm thinking it might be a bit dangerous).
And Edith knew as well as anyone that "lifetime" treasures could easily be lost or broken.  It was her sweaters that got chewed in the opportunity-for-recycling incident she describes in this chapter, and her wedding china that reportedly got broken by the Schaeffers'constant stream of houseguests.  Moths (mice?) and rust corrupt, cigarette sparks make holes, and careless guests break dishes.  It's a bit of a paradox that Edith describes, in such detail, the value of having your own special stuff; but that she could also see possessions as belonging, ultimately, to the Lord; that dishes and rugs could be somewhat expendable in the service of the Kingdom.

I do have a few treasured family items, but they're not the sort of things you'd want to cart around in a suitcase or that you'd use to dress up a temporary space: a piece of red glassware that was my grandmother's, a Psalter in German script that was passed down through her family, some photographs, my mother's earrings, and so on. I don't think those are the "treasured possessions" that Edith was talking about.

"What about me?"
I think she was shooting more for two types of home-related treasures. One would be just familiar, everyday (but also beautiful and individual) home stuff that becomes so much a part of your life that you, or your family, can't imagine home without it.  These days, instead of silver spoons, we might think of afghans or scrap quilts, pottery coffee mugs or bowls, a something-a-day calendar (somebody recently mentioned one with daily paintings), personalized pillowcases.
And her point is that if you don't have any homey stuff like that, then you need to get busy and find some, or make some, or let your kids make some.

The second would be seasonal, ritual-type treasures, things like Christmas ornaments or a birthday plate. (Remember the Red Plates you could buy for special days?  The RedPlate.com site mentioned in that post is defunct, though.) 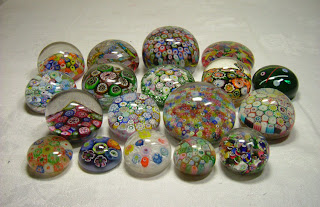 I'm thinking about my grandparents' move to a granny flat, after forty years in one house.  Somehow they managed to make their new living room look something like the old one.  My grandpa still had a special chair, and some of his steam-train memorabilia.  Grandma's coffee table was still topped by a particular millefiore paperweight.


I'm thinking of my own lifetime of moves and temporary living situations (summer places, university rooms), and there were quite a few; some achieved "home" and "connection" more than others.  When my sister and I were in university, our parents moved to a smaller house, and they had the attic space converted to bedrooms so we'd have a place to stay.  The nicest thing my dad did was to ask the carpenter to build bookcases for me around the staircase railing; it was a kind of "welcome home" even though I lived there for only a short time.
My biggest concern with this chapter, or rather its meaning now, isn't so much whether our treasure is silver candlesticks or something else; it's that, I think, the youngest ones among us--say the young adults and then that generation of grandchildren now making an appearance for many of my own friends--don't seem to cherish much that doesn't come from a big-box store (I don't mean couches and washing machines, but electronics).  Stuff is cheap, easy come, easy go; if something breaks, it often costs more to repair it than replace it, so out it goes.   They're more likely to make themselves feel at home somewhere by pulling out a laptop or an electronic device and playing a game or some music.
There may be a small positive side to this in that our next generation feels less materialistic than their parents or grandparents; that is, they don't see themselves as caught up with "things."  They're less likely to register for wedding china and then cart it through several moves over a lifetime and then leave it to the grandchildren et cetera.  The prices on (used) Royal Doulton figurines have taken a dive in the last few years.  But this also means that they're not taught in the same way to care for things, to preserve, to treasure.   So here's the last point: if Jesus said to store up treasures in heaven, not on earth, isn't that a good attitude to have?

Maybe.  But as Edith says...without any material connections, we risk becoming splintered, unsettled.  Our longings for a home on earth may simply reflect our longings for home in heaven, but while we're here, can't we make our homes places that we care for, and where we know we are also cared for?


"She loved Clarence very tenderly; when he was yet a tot, she taught him to be gentle with all that he touched.  She began this patient instruction by giving him a rare piece of early Staffordshire, a milkmaid with a brown cow.  She taught him to lift the piece with great care and dust beneath it.  Over and over again, he did this under her watchful eye, with never a chip or a crack, Father, and he was but a toddler!  All that love pouring into him is today poured out into his beautiful [carved] bowls and animals and walking canes."  ~~ Jan Karon, Light from Heaven

Related posts:
Interior Decorating and The Friendly Giant (Chapter 5)
What Can We Do? Crafting a Home (Chapter 5)
Homemaking thoughts, Home-making blogs (Chapter 5)
Posted by Mama Squirrel at Saturday, May 18, 2013

the things that move with us and make our house home?

our dining room table (this has not always been able to be moved, but when it fits, it is the single most identifying object that we own, i think).

my very simple table centerpieces. candle holders, rocks, runners and such. (these come out only if we're staying for more than a month in a place)

my bedspread. and each child's color coded sheets or blankets (too hot in the jungle for blankets!!)

oh, and the electric kettle and coffee press.

and that's the bare minimum. of course even some of those have to stay packed awhile sometimes and there are other special things that we look forward to unpacking, but it's amazing how much you can do without.

No matter how I decorate my grandmother's and great aunt's quilts always fit in somehow along with their china.

In fact, I never met a dish I did not love.

After years of not seeing my stuff because we moved around the only things that really mattered when we got it all back were the quilts, photo albums and dishes. The rest was just stuff.