The Hidden Art of Homemaking, chapter 5: Interior Decorating and The Friendly Giant 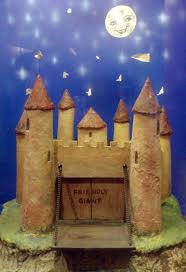 This You-tube video, if you've never seen it, is a clip from the program Clean Sweep. Several years ago when we had a satellite dish, it used to come on right around the time we got home from church on Sundays, and the kids and I would get a quick lunch and watch. You know what happens after they blow the whistle? Everybody gets busy and hauls EVERYTHING in that room out to the yard, for sorting and a whole lot of discarding. Some of it, they junk--the dirty, the useless. Some of it gets sold in a big yard sale. The best stuff gets kept and incorporated into a new room design.

I learned several things from watching this show.

1)  Many of our houses contain several-times-over-enough stuff already to be beautiful, functional, and express our dreams, values, and individuality.  At church we are watching a DVD series with Dallas Willard, and in yesterday's session he stated that humans are "treasuring creatures."  Our "things" are important to us; they give us identity; they give us comfort.  As Edith Schaeffer says, they also give us continuity when housing has to change or life gets difficult.  It's not unnatural to want to have treasured possessions, cherished things.  Sometimes they remind us of people we love, or places we've been, or special times.

What Edith Schaeffer didn't deal with so much, around 1970, was the problem of Too Much.  She didn't talk much about shopping addiction, hoarding, or just getting stuck with a load of somebody else's possessions. The issue of creative homemaking for us now is often cutting down, cleaning out, detaching ourselves from enough of the "stuff" so that we can cherish the most meaningful, most memorable, most beautiful.  Charlotte Mason talks about using our will to make choices, rather than just accepting whatever default options present themselves; in making our homes more homelike, that would include making conscious choices about the things you want in a room, and what you don't want.

2)  If you're letting it get dirty, piled over with junk, even mouse-inhabited (like one Clean Sweep family's "heirloom clock"), then maybe you don't really care about it.

3)  If you do care about something, then use your newly-cleared-out space to use or display it.  On one episode, the Clean Sweep decorator framed some fabric and glued on treasured but hidden-in-a-box dried rosebuds.  As I recall, the decorators also found ways to display Scout memorabilia (after deciding that it WAS really important to the owner), and odd pieces of inherited furniture (ditto).  That doesn't mean that you have to turn EVERY dried flower into art, or that EVERY ex-Scout should have his/her badges on display (or should even keep them).  That's where individuality happens.

3b)  I don't know if this came up on Clean Sweep, but sometimes, especially with children, "treasures" that were once loved can be outgrown.  A good clue is if the dust on the model horses is now an inch thick.

4)  At least on Clean Sweep, a good carpenter seems to solve a thousand problems.  Once the clutter is out of the house, the re-do usually follows two different streams:  the decorator works with colour and the look of the whole thing, and the organizer usually gets the show's carpenter to build some kind of a wall unit in a family room or dining room, or a work island in a workshop, or a neat loft bed with storage.  Sometimes it's just shelves in a closet, or extending a too-small desk.  This is not to say that all storage problems need to be tackled with a router; only that sometimes the piles get piled because there is no good place to put things, even important things.  Backpacks get dumped if there are no pegs to hang them on.

Again, even good shelving doesn't solve the problem if (as they say on the show) you're trying to cram twenty-four feet of books into twelve feet of space.  But it does look better than stuff every which way.

5)  The last thing I learned on the show, and on other similar programs:  that little bits of comfort are important.  Not having grown up in houses with huge bedrooms (and not living in one now either), the idea of having a "sitting area" in a master bedroom, or in the corner of some other room such as an office, is one idea that's not intuitive for me.  When I was growing up, we just sat on the couch.  But the de-cluttering and re-do shows do this all the time, and it's not that complicated: usually a chair, a light, a little table, a pillow or throw, maybe a bookshelf nearby or a basket of things to read or write in.  If space allows, maybe a coffee table and another chair for a friend.  Just like The Friendly Giant. (photos here)

Linked from Hidden Art of Homemaking linky for Chapter 5 at Ordo Amoris.  (Link Fixed!)
Posted by Mama Squirrel at Monday, May 13, 2013

Decluttering is so helpful and useful. Making decisions about what to move on can be wearing, though.

I recently reviewed Decisive, and it's great for both parents and teens. It really shows how to be intentional about using your will to make choices.

But unfortunately it has nothing to say about making dozens of relatively unimportant decisions. :)

You bring up many excellent points. I've weeded out things sometimes but still have boxes of decorating stuff in closets that I've been hanging on to "in case" I might want them "some day."

living a migrant life has helped to keep down the clutter to some degree, but living overseas and having lots of children keeps it from being as minimalist as i'd like. i appreciate your points. in our current culture it seems to be very difficult for some people to get rid of things. and it would be a great will strengthening exercise!

i think that show would be lots of fun. :)

and i've almost always had a table and chair in my bedroom when it's been at all possible (at least a bedside one) where i could have at least one little spot to maintain visual peace and ambiance (this has been more or less necessary depending on our living situation).

My house is in a major need of decluttering--something I hope to get to this summer! Now if only I could declutter some books!

It is true that you can learn a lot about how to think about these things from some of these television shows. In a similar way, and for another chapter, I started changing the way I thought about clothing by catching a glimpse of the show What Not to Wear. It really helped me get out of the rut of wearing dated clothes, not to buy new clothes but to wear the ones I had in a different way.

Thanks SO much for sharing about this show and what you gleaned from it. My husband and I are in the process of "sweeping" our Everything Room to see what we can do with the piles of other people's treasures we have inherited. :-)

You've made some great points. I have seen this show a few times (mostly while traveling and staying in hotel).
I wonder if Mrs. Schaeffer were to put out a new edition, she might address that idea of having too much. Your statement "using our will to make choices, rather than just accepting whatever default options present themselves" sums it all up very nicely.
We are currently knee deep in piles of stuff from our own version Clean Sweep on our storage room. Thanks for your pointers!