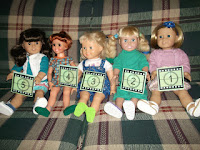 So what are "we" talking about, when we talk about Language Arts at this level?  What am I talking about, meaning what Dollygirl should learn this year?  Is it literature?  Is it grammar?  Is it that thing called Communication, which can either be one of the most important concepts ever, or just a weasel word for dumbed-down English?  If Charlotte Mason didn't label anything as "Language Arts," is that because almost everything in her curriculum involved language, reading, oral and written skills?  How do we stay true to CM, but also stay current, without turning everything into a podcast?


"To try to teach literature by starting with the applied use of words, or 'effective communication', as it's often called, then gradually work into literature through the more documentary forms of prose fiction and finally into poetry, seems to me a futile procedure. If literature is to be properly taught, we have to start at its centre, which is poetry, then work outwards to literary prose, then outwards from there to the applied languages of business and professions and ordinary life."--Northrop Frye, The Educated Imagination

So no, I'm not talking especially about grammar.  That's over to one side, almost a separate subject.  Like arithmetic practice when you also have bigger math ideas to focus on.  (Mathematics, as one math history book we used to have showed us, is like a great big tree with a lot of branches, and arithmetic is just one branch.  But that's another post.)

And it's not about spelling, at least not now, not for us.  Dollygirl did some work with All About Spelling a few years ago, and that helped her out a lot.  Now when I dictate paragraphs to her, prepared or unprepared, she usually does so well that it's hard to stump her.  Her handwriting is another story; so I've been having her do dictation on the computer.

But handwriting isn't the biggest part of Language Arts either.  Yes, it's a question, especially these days when I've read that many schools don't even teach cursive writing (can you imagine?), and especially when Dollygirl still does have some issues with cursive, but it's not the core.

So what are we back to?  Reading.  Writing.  Reading what?  Writing what, and how?  Even the Ambleside Online "Language Arts Scope and Sequence" isn't extensive at this level:  it's basically grammar, narration, dictation, and copywork, with a note that if you have to set something aside at this stage, you should keep the dictation going instead of the copywork.  One key is that "narration" covers a great deal of ground.  Another is that, looking at either Ambleside Online's booklist for the year, or any of the original PUS programmes, there's a high level of reading competence assumed, and not a lot of hand-holding.  Again, maybe that's what it all comes down to:  Charlotte Mason didn't talk much about Language Arts per se, because they were just doing it.  As Mortimer J. Adler says in the first chapter of How to Read a Book, the assumption used to be that you read because you wanted to learn.  Reading and learning were almost synonymous...and sometimes reading to learn meant freedom or even outright rebellion.

The textbook I looked at has a great deal of emphasis on "critical thinking," but from a "self-expression" kind of viewpoint.  What do you think about this or that issue?  The culminating project--which can be done in several ways, from a formal essay to a photo-essay--is about one's own view of the "global family" or  "human family."  Not that I have anything against the big questions, the big ideas--the normative questions, themes of heroism and so on are, what's the word I want, imperative, indispensable, vital.  But there's more than one issue there that I trip over.  Not only that that theme risks becoming a bit one-worldish and political...some people would just think that "the human family" is a nice, peaceful, inclusive thing to think about.  Could even be part of a Christian textbook.  No, it's, first of all, that overemphasis again on the centrality, almost the infallibility, of the seventh-graders' viewpoint on how the world works; not that I don't think seventh-graders can think, but, for Pete's sake, they're twelve- and thirteen-year-olds, with both bigger and smaller concerns...and while allowing them to pontificate on the global family may turn their attention somewhat away from their own issues...and this is the thing I'm stretching for, so stick with me...I don't think the material that's being given to them (in school, in this book, in the contemporary, public-school approach to Language Arts and education as a whole) is going to speak much to the bigger ones.

If you're going to ask the big questions, you had better provide a means to at least look for the big answers. And I don't think a seventh-grade language textbook is going to be the place to find them, at least not on its own.

I was going to say, "stay tuned for Part Three" and leave it at that, but something funny (and suggestive, as CM would say) happened. We are having some tree work done this morning in the Treehouse yard. (Aftermath of the quite violent storms last month.) One of the tree guys said that he had planned to put a bolt into one of the trees, but he couldn't do it this morning, because his drill was broken. Mr. Fixit told him to hold on. He disappeared into the workshop and came back with his late grandpa's 1950's brace and bit. The tree guy was very impressed.  "Do you know how hard it is to find good equipment like this?" Grandpa left us many of the tools we need. We just have to know how to use them. And provide sufficient amounts of material (mind-food) to make it worthwhile. 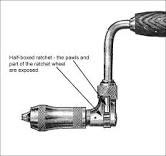 Image from OldToolHeaven.com.
Posted by Mama Squirrel at Friday, August 02, 2013