For Good Friday, from Perelandra 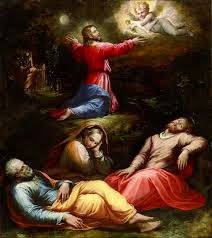 Giorgio Vasari, The Garden of Gethsemane

In Perelandra, the second book of the Space Trilogy by C.S. Lewis, linguistics professor Elwin Ransom has been transported to "Venus," a planet that somewhat resembles the Garden of Eden and that contains not only a humanoid "Eve," but an evil force determined to subvert the planet for its own ends. Until this point in the story, Ransom has hoped that he can simply out-argue or out-logic the evil one, which has taken over the body of another man from Earth (Ransom thinks of it as the Un-man). Now he realizes that more may be required, and he is not sure if he has it in him to give. During a long, silent night, he confronts his fears.

"He sat straight upright again, his heart beating wildly against his side. His thoughts had stumbled on an idea from which they started back as a man starts back when he has touched a hot poker. But this time the idea was really too childish to entertain. This time it must be a deception, risen from his own mind. It stood to reason that a struggle with the Devil meant a spiritual struggle...the notion of a physical combat was only fit for a savage. If only it were as simple as that...but here the voluble self had made a fatal mistake. The habit of imaginative honesty was too deeply engrained in Ransom to let him toy for more than a second with the pretence that he feared bodily strife with the Un-man less than he feared anything else. Vivid pictures crowded upon him...the deadly cold of those hands (he had touched the creature accidentally some hours before)...the long metallic nails...ripping off narrow strips of flesh, pulling out tendons. One would die slowly. Up to the very end that cruel idiocy would smile into one's face. One would give way long before one died--beg for mercy, promise it help, worship, anything....

"The voluble self was almost thrown out of its argumentative stride--became for some seconds as the voice of a mere whimpering child begging to be let off, to be allowed to go home. Then it rallied. It explained precisely where the absurdity of a physical battle with the Un-man lay. It would be quite irrelevant to the spiritual issue. If the Lady were to be kept in obedience only by the forcible removal of the Tempter, what was the use of that? What would it prove? And if the temptation were not a proving or testing, why was it allowed to happen at all? Did Maleldil suggest that our own world might have been saved if the elephant had accidentally trodden on the serpent a moment before Eve was about to yield? Was it as easy and as un-moral as that? The thing was patently absurd!

"The terrible silence went on. It became more and more like a face, a face not without sadness, that looks upon you while you are telling lies, and never interrupts, but gradually you know that it knows, and falter, and contradict yourself, and lapse into silence. The voluble self petered out in the end. Almost the Darkness said to Ransom, 'You know you are only wasting time.'....

"He had exhausted all his efforts. The answer was plain beyond all subterfuge....This he must do: this he could not do....'It is not for nothing that you are named Ransom,' said the Voice."
Posted by Mama Squirrel at Friday, April 03, 2015

This is one of my all time favorite books (and trilogy). The first time I read it, it haunted me (in a very good way).

I was just thinking recently about reading the trilogy again and this quote causes one to want to live in Perelandra again for awhile.

I'm glad you are feeling better! Have a wonderful weekend.

What a great line for a Good Friday:

He had exhausted all his efforts. The answer was plain beyond all subterfuge....This he must do: this he could not do....'It is not for nothing that you are named Ransom,' said the Voice."