My curated, artisanal, serendipitous closet, and a revolutionary thought

No, not really, about the curated, artisanal part. But it seems like a long way from a midlife closet crisis, not so long ago, to finding a happy-place with clothes.

We hadn't been to the thrift store in weeks. There wasn't much to clean out, and nothing urgent to look for. But we had slowly accumulated a boxful of things to drop off, so we did that, and I had a few minutes to shop. What I had in mind was either a heavy sweater, or a light-coloured pullover, things that had been on my list for awhile. I looked through the sweaters quickly, but found nothing that worked. There was also nothing interesting on the dollar racks. No shoes that looked like they'd fit, no interesting belts, the only dress possibility was black (just, no), and the only purse I liked was too expensive. Then Mr. Fixit ran into a friend and stopped to chat, so I had a second look at the sweaters. Wait--that sort-of green-mixed-with-grey one there. Would that fit? It did. Was it the right colour? It was. It was an unusual feeling to be that sure of one thing, in a whole store full of other things I didn't want or need. "Nice colour," the cashier said.

This is the sweater plus the GREEN Chrysalis Cardi (as a scarf). 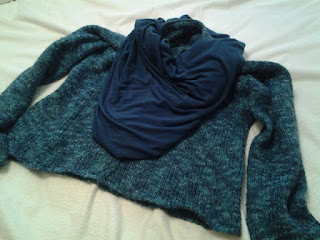 This is what it looks like using the belt from the Chrysalis Cardi as a skinny scarf. (Also GREEN. I tried hard to get the colours right, but looks like the camera on my tablet missed the boat again.)  The sweater isn't a cardigan; that line down the front is a somewhat-diagonal decorative seam.

So I now have two fall sweaters. They're both my favourites. That feels like a good place to be in. 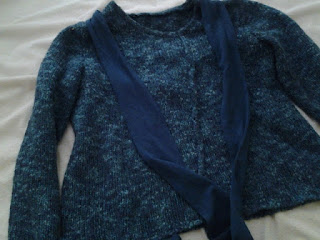 I recently read and reviewed The Curated Closet, and as I said, fashion books are sometimes hard to use if you don't already have a good idea of what you like to wear. Often they are like cookbooks written for chefs. My reluctant-shopper mind (to use the cooking analogy) functions more like Peg Bracken's "I just want a couple of recipes I can swear by instead of at."

But here's my revolutionary thought. I don't go to the grocery store and expect to pick out all the wrong food that we'll hate and that I'll throw away (not usually, anyway). I don't expect that 90% of the time I'll burn the cookies. Is it because clothes are so tied to our personal selves that we feel slightly blasphemous about thinking that we have gotten acceptably competent at choosing them? (A new phone is one thing, a pair of shoes is another.) I almost wonder if it's like the "I can't do math" thing, one of those things that it's almost more acceptable to agree you're bad at too, rather than to raise eyebrows by answering, "Gee, I dunno, I always thought trig was sort of fun." There is a place for genuine humility, and for acknowledging that there are certain things we are never going to be very good at. It's also okay to know that some of us are not going to look like airbrushed celebrities even if we wanted to. But the simple idea that it's okay to say, "Hey! Look what I found!"--even if it's just to ourselves--and to take some pleasure in that, even if we're always going to be kind of middle-of-the-road shoppers and dressers; that has to be acknowledged too. To quote the Winter Warlock, "I'm not such a loser after all."

I struggle with finding comfortable shoes. So when I'm shopping for them, I am praying. My prayers are not often answered, but the last couple of pairs have been a gift in price and comfort, so I rejoice. Same as you. :)

Your sweater looks lovely and soft.

Shoes are my bane as well.