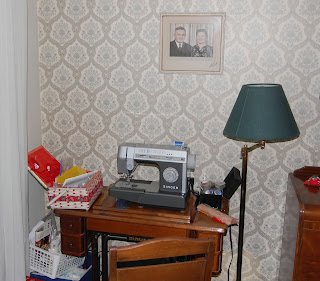 I tend to go with the second choice.  Although I like to sew when I do have fabric, I don't keep a lot on hand.  I don't have a handy, inexpensive source of new fabric (even the mill-ends store can be very expensive); I'm not a quilter, or much of a clothes-sewer, so I don't have ongoing large needs for fabric; so it wouldn't make sense for me to stockpile much more than we can easily use.  One carton, maybe. 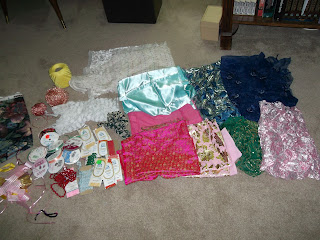 Lately I've been trying to get even that "stash" down to the minimum.  I used up three large pieces that had been in the bottom of the box for a very long time. 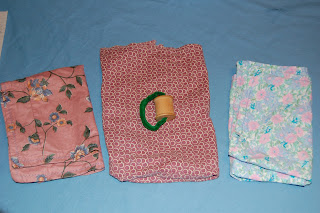 One was a maternity skirt that I sewed so many years ago that it qualifies as "vintage" fabric.  One was Dollygirl's baby sling.  One was just a piece of flowered fabric that had been there so long that even I didn't remember where it had come from.  All of those became cloth napkins, because we're trying to be frugal like that.  (I think I made about fourteen--I lost count.)

A pair of red corduroy pants, three red and blue placemats, and a piece of calico became Crissy clothes. (More about that in another post.) 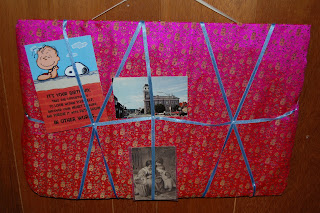 I used a piece of fancy pink fabric (from that yard sale back in June) to make a ribbon bulletin board.  If you think it looks a bit lumpy, you're right.  I wanted it up so badly that I kind of jerry-rigged it together with a lot of safety pins.  But I'm planning on taking it apart and straightening it up a bit.

A thrifted piece of red print, plus some white sheeting and eyelet, became a new dress and pinafore for Dollygirl's Abby. 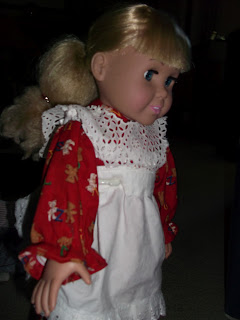 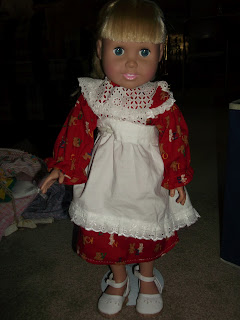 The rest of the red print, I made into gift bags. 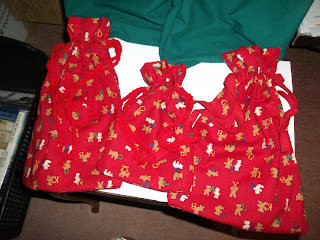 The fabric carton is now about one-third full, and most of what's left, I don't think even Aunt Sarah could make much use of.
All photos by Mr. Fixit and Dollygirl. Copyright Dewey's Treehouse 2012.﻿
Posted by Mama Squirrel at Monday, September 10, 2012