We had our last in-real-life crochet class last Saturday, but I'm just getting around now to posting about it.

The girls had their choice of projects.  I suggested one of these two amigurumi pieces: 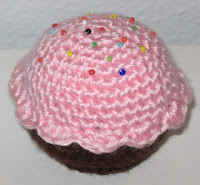 Cupcake, from Ana Paula's Amigurumi Patterns & Random Cuteness (photo: theirs) (I would suggest not working with such dark yarn for the base, though, especially if you're still new to crocheting.  Lighter colours make it easier to see the stitches.)

Birds of a Feather, from the BitterSweet blog (photo: theirs)

We had a few takers for the cupcake, and I think two for the bird.  Crayons decided to make a hamster instead (from a library book). (No photo yet--we'll take one when she's done.)

All three patterns are very similar:  you start by making a flat single-crocheted circle (just like the mini hat), and then when it's big enough, you stop increasing and just work straight up for a certain number of rows.  The new technique that everyone had to learn was decreasing, because when you get near the top you have to get smaller again!  In the bird pattern, decreasing is written as "sc2 tog," meaning that you single crochet two stitches together.  The cupcake pattern calls it "dec 1," meaning that you decrease one stitch by working the two stitches together.  (Pattern reading is a skill in itself.)

Nobody got completely finished in the last class, but they all got off to a good start on the projects.  Each girl took home an "Each One Teach Two" certificate stating that she "is now qualified to be known officially as a crocheter; is granted all rights and privileges for the use of yarn and hooks in a fun and creative manner; and is authorized to share this new talent with at least two others."

And if you've followed us this far, you can go ahead and print one out too!  Congratulations!
Posted by Mama Squirrel at Thursday, April 26, 2012