Recently I  read two mysteries with a revive-somebody-old theme.  One of them was a recent Sherlock Holmes novel (Grandpa Squirrel lent it to us), not bad reading but with really a nasty crime at the bottom of it.  The other was a novel set in 1934 and starring the real-life mystery writer Josephine Tey as one of the main characters.  I finished it dutifully, but I really disliked it, for several reasons.  I never did figure out that blackmail subplot. And Josephine Tey didn't even get all that much to do in solving the mystery.  Besides, as someone else pointed out, Josephine Tey was just one of her pen names anyway, so it's not very believable that her closest friends would have called her that.

It wasn't until I got partway through Rumpole and the Golden Thread this week that I realized what was missing in those other books.  Humour. 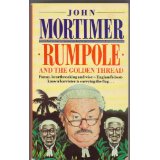 I know the Rumpole books aren't strictly mysteries, they're lawyer stories that sometimes have a bit of a mystery attached, so maybe it's not fair to compare them.  But honestly, I would rather have a few 1980's laughs courtesy of John Mortimer than read any more of those grim and gritty newer novels, at least for awhile.  Rumpole doesn't forget that we need to laugh sometimes, even when life is less than perfect.  It's kind of the same reason we still like watching The Rockford Files.

And besides the frequent quotes and misquotes from The Oxford Book of English Verse, they enrich my vocabulary immensely with words like plonk.

P.S.  Grandpa Squirrel says he likes them just for the cover art.
Posted by Mama Squirrel at Friday, April 27, 2012

There is plenty of good cheap Aussie plonk around our house...for when you come visit!

Heh--in this part of the world I think it's just "booze."