Herbartianism Made Fun and Easy, Part Ten (last one): Attention! 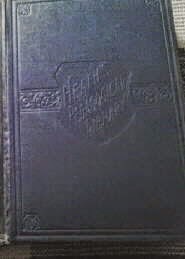 Chapter Ten of Herbartian Psychology, "The Doctrine of Interest," is over thirty pages long. I don't want to presume on people's interest in this book past ten posts. Some are already shuffling their feet and finding their car keys in anticipation of the benediction. But, on the other hand, it's a good chapter. So, extend the series? No. Write an overly long post? Also no. But I am almost certainly going to miss some worthwhile points, so wander over to archive.org if you'd like to really check out the last chapter.

The most important and practical idea here, especially for those interested in Charlotte Mason's methods, is about attention, both voluntary and involuntary. Most parents know how to invoke young children's involuntary attention, or distract them from something undesirable--the "ooh shiny" idea. But as children get older, we want them "to pass from the purely involuntary to the purely voluntary forms of attention....[yet] in a certain sense, the converse is true, and the function of education may be regarded as the creation of involuntary attention through voluntary attention. By deliberately concentrating our attention upon a certain class of subjects, we may build up such a powerful apperception mass that any fact connected with that mass will at once attract our attention quite irrespective of our will. This produces an alertness to certain classes of facts that may be of the utmost service in our experience, and therefore may be legitimately held up as one of the aims of education."

Adams says that "a thing must find a natural place for itself in the cosmos of the child's mind," and that "teaching consists in finding or forming suitable places among the apperception masses for new ideas." When a new fact or idea comes pinging through the air, up into the dome, and there's a magnet (apperception mass) there to receive it, it's not even a matter of will or of forcing ourselves to pay special attention to that stimulus; the idea just goes where it's supposed to go. This can work, as Adams says, in the area of a child developing skills such as walking or holding a pencil. In the beginning, that new skill takes all his interest and attention; when it's mastered, the act itself naturally becomes less interesting because he's ready to move on to something else. It's like the month or so that it's said we need to establish a new habit; when it's firmly entrenched, you can stop consciously thinking about it.

And then an interesting idea pops up. Adams quotes William James' Principles of Psychology, which would have been quite new at that time, and asks this question: if someone insults you, which do you do first?--clench your fists and contract your brows, or get angry? Don't answer too quickly, think about it for a minute. Does the emotion come first, or the physical response? Does the physical response actually give you a rationalization for becoming angry? For those of you who know Charlotte Mason's story of little Guy and his tantrums, and the other stories in that volume, doesn't that thought make sense? When Guy was about to erupt, his parents learned to watch for the physiological signs before he actually said or did anything else, and tried to divert him at that exact point before there was no going back. For Charlotte Mason, the answer to Adams' question is clear: an undesirable emotional response follows the fist-clenching and brow-contracting, so if we are in tune with our own physical symptoms, we can divert our attention. Or, possibly, that of someone else.


"Every prosy lecturer to the young who urges his dear young friends to count ten before they reply to an angry speech...is a practical supporter of Mr. James."

So there we are, back where we started. But Adams has one more point to make about this attention question, and it relates more directly to teaching.  He claims that "If a boy is allowed to maintain the attitude of inattention, nothing can prevent him from becoming inattentive." If we allow children to act bored, they'll be bored. And what do you do about that?


"In every case attention owes its direction to the emotional states that accompany mental action; in other words, attention follows interest....[but] Interest depends upon the apperception masses that can be brought into relation with the given object. Attention cannot create masses, it can only give masses a chance to rise into consciousness."

So if he knows nothing whatsoever about the subject, he'll be bored; as was said in an earlier chapter, the piece of information will quickly drop out of his consciousness. But if he is given a reason to be interested, if it connects with something he already knows, then he'll pay attention without having to be either forced or deliberately entertained. I read through this entire book about Herbartian psychology without having to be forced to do it and without falling asleep (coffee helped), because even the duller parts connected closely with something I already knew something about and had an interest in. I had a real reason for working through it. (The amusing bits like giving Fagin a teaching award were just a bonus.)

Here is something I think Charlotte Mason would have loved:


"Teachers are fond of talking about creating an interest; but this labour at least is spared them. They have not to create but only to direct interest."

And one especially for my friend Karen:


"Now we find in wood a delightfully abundant source of carbon [which our bodies need]. Why, then, is there no run upon shavings during a time of famine? Why does sawdust not keep down the price of porridge?...The body insists upon having [its carbon] in decent oatmeal, and other legitimate forms. So with ideas."

Adams ends the chapter, and the book, by noticing that "if we have drifted somewhat from Herbart, we have drawn nearer to Froebel. That the two opposing systems should tend to meet on common ground is no more than one acquainted with the movement of the Hegelian dialectic would expect." Hegel aside, (and Adams says that that's exactly where practically-minded teachers should put him), it seems to me that the same could be said about Herbart, at least in Adams' interpretation, and Charlotte Mason. They may not agree on all points, but it seems that there is more common ground than we once thought.


"The theory of interest does not propose to banish drudgery, but only to make drudgery tolerable by giving it a meaning. We have seen that what is interesting is by no means necessarily pleasant; but it is something that impels us to exertion....the principle of interest braces [the student] up to endure all manner of drudgery and hard work." ~~ Sir John Adams, The Herbartian Psychology Applied to Education.