"There is a prevailing impression amongst teachers, and particularly amongst those who are connected with what is sometimes called a liberal education, that it really does not matter very much what one learns. The culture comes all the same. It is not the what, it is the how." ~~ John Adams, The Herbartian Psychology

There's a shocker for you. Adams is not agreeing with this or saying that it represents Herbartian education; he's refuting it.

Yes, CMers, you may well shake your heads over that one. Isn't that exactly what we have said that Herbartianism is? Does Adams perhaps have it wrong? Did the so-called "Herbartian" teachers miss out on something in their courses?


"In the present war of competing subjects, the main point of discussion is: Which gives the best result in culture,--which is best fitted to cultivate the mind? Classics, Science, Mathematics--each claims pre-eminence. It is left for the Herbartian to sweep aside all claims alike, and raise the preliminary question: Do any of them train the mind at all; can the mind be trained? The question resolves itself into the problem of the possibility of what is called formal education; that is, the possibility of training a mind irrespective of the materials upon which it is exercised."

Adams gives the example of three educated men who have specialized in different areas. He asks how they would respond to particular common questions and problems, for instance in finding a lost will (certainly something we come up against every day, no?). How would each one approach the task? Who would be the most successful? Adams, amusingly, backs the classically-educated man "because his studies have brought to him greater acquaintance with human nature," so therefore "he has a bigger and better-arranged lost-will apperception mass." For the Herbartians, those apperception masses are the key to educational success. 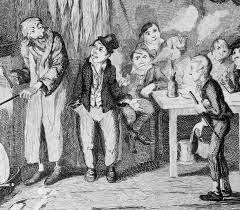 And then Adams' chapter on "Formal Education" takes an unexpectedly funny turn, as the question of potentially useful subject matter moves from a formal education based on, say, cricket, to Mr. Fagin's School for Young Criminals. Fagin, according to Adams, should get the teacher-of-the-year award. He's hands-on, he's concrete, he knows just how to get a lesson across, he can deal with reluctant students; and Bill Sikes knows how to present a good object-lesson too (involving a pistol). So does it really matter what the subject is, as long as the student develops his mind? Herbart, via Adams, says yes, it certainly does.


"Given the same first-class mind, we may turn out an Artful Dodger or a James Watt; given the same third-rate mind, and we may develop it into a Bill Sikes or a more than respectable artisan."

Check this out, towards the end of the chapter:


"It is enough if it has been shown that the choice of subjects is important; that a subject must be chosen for its own sake, not for the sake of its general effect in training the mind. This is no base utilitarian conclusion...So far from opposing culture, the Herbartian theory is the strongest supporter of the fine arts and belles-lettres. The increase in intension and extension of interest is the gauge of the development of a soul. We must lose ourselves in our subjects, not seek to keep them outside of us."

So what about that idea that an education in the finer points of crime would at least serve to sharpen a child's wits, to develop perhaps an interest in chemistry or electronics, perhaps even to give him a sense of professional pride? To bring this into the current century, is it admirable to become a genius computer hacker, or to be a teacher of such?