Herbartianism Made Fun and Easy, Part Two: Let's talk about a sheep

In the Part One post, I mentioned that Sir John Adams (the author of The Herbartian Psychology) saw Froebelian education as the opposite of Herbartian. He says that Froebel brought education as far as recognizing the importance of the individual learner; but that his theory lacked any real means of explaining or working with that individuality, that it didn't go far enough. "Almost every teacher thinks that when he has shown a thing to his class, he has done the highest, the best, the ultimate, in teaching....[but] the average child does not see what the master is showing him...[it] does not ensure that teacher and pupil shall speak of the same idea, when they talk of a sheep." 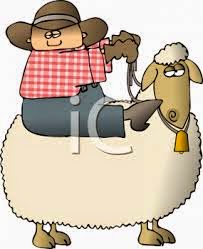 Adams says, "[Froebelian theory] suggests the immense importance of knowing [the student]; which is much, [but] It leaves to others the task of supplying this knowledge." (emphasis mine)  Yes, we see that each child is unique, that each one learns a little differently; but we aren't given much help in knowing what to do about that.

So here we have a problem set up, with Adams' assumption that Herbart found an answer or at least came closer to it. Adams says that so far "we have failed to explain ideas by the mind; how about explaining the mind by ideas?" What if the ideas are like critters we should be hunting down, and the mind (or soul, in Herbart's terms) is more like a ranch or a zoo where they can be corralled?

Herbart said that ideas "have a vitality all their own"; that they are the only thing that can affect the soul (mind); and that when "a soul has reacted upon an idea, it can no longer be the same soul that it was before." "The ideas really make up the mind," in the same way as it is the writing that holds the meaning, not the paper or the computer screen. But if Herbart (via Adams) was looking for practical results rather than theory, what might these ideas suggest to the teacher? Is the teacher then a sort of cowpoke, rounding up and organizing all the stray little dogies? A question that doesn't seem to bother Adams, at this point, is asking who really owns the "critters," or has final say over which ones come in or where they belong.

Adams' interpretation of Herbart in response to this is a little different from what CMers might assume. "The popular notion is that knowledge has to be carefully prepared beforehand by the teacher, and then judiciously stuffed into a suitable place in the pupil's mind, a sort of mental left-luggage office, there to be left till called for." If that is our only understanding of Hebartianism, and it might well be, then according to Adams we have missed something. One of my reasons for writing these posts is to try and be fair to Herbart; he wasn't always wrong.

But though Adams is a most genial guide to Herbart, he occasionally throws in a jaw-dropping pronouncement and then moves on. One such is this (page 73):


"On this view, the function of the teacher becomes clear; for, unlike most Psychologies, Herbart's has an obvious and immediate bearing upon education. The soul is in the teacher's hands, inasmuch as the apperception masses can be made and modified by the teacher....Every idea in that little head is a force with which the teacher must reckon. His first duty is obviously to discover as much as possible about the contents of John's soul. Only so far as he succeeds in this is he able to understand the reaction of John's soul upon any given idea. The very inevitableness of the soul's reaction is the teacher's chief aid. Here he finds the fulcrum for his lever. The rest of his work is actual building up, edification."

It's at that point where we start to see the true gap between Herbart and Charlotte Mason. Do we want to let even a well-intentioned teacher pry into our heads? CM is about not only recognizing that we have our own thoughts, but that they are between us and God; that we have the right and the responsibility to corral our own critters.

This is surprisingly interesting! :) thanks for making it so... :)

I agree with Amy. You get to the heart of their differences with ease, -not that I knew those differences before, but I see them after I read this