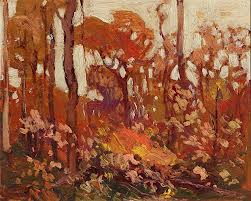 A Tom Thomson print that Mr. Fixit found on his antiquing rounds; we put it up by the front door.

Christmas cards from friends at church

A new frying pan, new socks, new bottle of lotion, and other things I've run out of

Having enough tissue paper and tape to wrap everything

A jar of Mod Podge and a colour printer (couldn't have done this year's gifts without those). 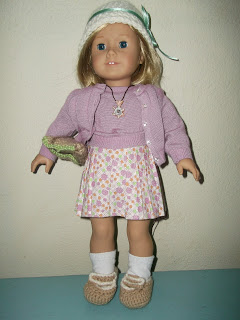 A furnace that's made its way through another year.

And nothing worse than head colds this week.
Posted by Mama Squirrel at Tuesday, December 25, 2012 No comments:

The Number Devil: A Mathematical Adventure, by Hans Magnus Enzensberger

I brought this home from the thrift store, without any particularly high hopes for getting Dollygirl interested in a story that was supposed to be a mathematical version of The Phantom Tollbooth or Alice in Wonderland.  Such books often have a didactic smell of the nursery, even when they're new; and this one is fairly new: it was published in German in 1999, and the English translation came out in 2000.  And translated books...well, sometimes they work and sometimes they don't. I am very happy to say that The Number Devil (at least the ten of twelve chapters we've read) has surpassed not only my expectations, but Dollygirl's.

Briefly, a math-hating boy named Robert has a series of dreams, each featuring a little red guy with horns who does amazing things with numbers.  Yes, Robert does learn to appreciate math more, but not in a "behave yourself better" way. Even The Phantom Tollbooth always has a bit of that "Milo, smarten up" aura around it, but The Number Devil just happens to show up and make life...or at least dreams...more interesting, and you might learn something at the same time.

I like the fact that several of the math threads continue throughout the book, such as "Bonacci numbers" (what the Number Devil calls the Fibonacci sequence).  I've seen too many books that give a page or so to things like that, and then it's off to something completely different and you never see them again.  Robert's dreams have different topics, but they're definitely sequential...and they come back to a starting place, usually "one."  (Who knew that "one" could be so interesting?)  I also like the colourful diagrams; to my poor non-math-major's mind, they make some kind of sense.  The dialogue is snappy, not patronizing, and doesn't get bogged down with what it's trying to teach; that in itself is worth a few stars.

We'll miss the Number Devil when the dreams are over.

Last night's dinner menu (after our afternoon out):

Cranberry pork chops in the slow cooker, made with a package of boneless pork chops, a can of cranberry sauce, 3/4 cup of chili sauce, a tablespoonful of brown sugar, and half a tablespoonful of lemon juice.  The sauce breaks down a lot more in the slow cooker than it does on the stovetop, so I had to thicken it with cornstarch at the end.  Ponytails was at a friend's, but Grandpa Squirrel came over and helped us polish them off.

Sauerkraut-filled perogies from the Euro foods store.  Sauerkraut might sound like the worst thing ever with the cranberry-chili sauce, but it actually worked.

This is the second week of Term Two, but we're also trying to finish off some Term One books.  The list may sound a bit dry, but it's just the book end of things; we are spacing the book lessons out with other activities.

Basic Bible Studies, Study 11b:  The Exaltation of Christ.

The Number Devil.  This has turned out to be a book that Dollygirl enjoys, so we are continuing it this week.

Albert Einstein:  With a bit of judicious skipping, we may be able to finish it by the end of the week.

Usborne Ancient World:  continue reviewing some of the ancient civilizations.  (We got as far as the Minoans last week.)
Posted by Mama Squirrel at Sunday, December 09, 2012 No comments:

Every so often I get a phone call from a market research company that does focus groups.  If you fit into a particular demographic and also fit into whatever they're currently studying, you get paid something to sit in a focus group for a couple of hours.  I've done several over the years, although I often don't qualify because I turn out not to eat enough fast food, drink enough wine, go on enough trips, buy enough boxes of chocolates...but I usually get picked for the groups where they're looking for people who don't do those things.  (It pays to be honest.)

Anyway, they usually ask you right away, when they call, if anyone in your house works for market research, public relations, or other conflict-of-interest companies.  Recently they added, "or is anyone in your house a teacher or educator?"  "Well," I said, "I do homeschool my kids.  Ha ha."  "Just a minute," the person said, "I'll ask my supervisor."  "Really?" I said, "It's not like I'm getting paid for it."  "Well, let me check anyway," she said.

Back she came and, "No," she said, "or that is, yes--you do count as a teacher, so that disqualifies you from the group."

Well, how about that?  Somebody out there thinks I'm legit.

Linked from the Carnival of Homeschooling at Our Curious Home.
Posted by Mama Squirrel at Thursday, December 06, 2012 1 comment: