Quote for the day: whose psyche?

"....modern criticism is obliged to distinguish between the universal myth (or archetype) of almost all art and literature created before the nineteenth century and the personal symbolism of most modern creativity.  Curiously, this signal fact is assumed by the modern teacher to render three thousand years of art and literature inaccessible to the student.  Instead, students are encouraged to kick around in the private symbolic universes of Yeats, Joyce, and D.H. Lawrence.  Can anyone wonder why psychological survival seems so much more difficult in the modern era?"--David V. Hicks, Norms and Nobility
Posted by Mama Squirrel at Wednesday, August 31, 2011 No comments:

"In our eagerness to solve the material deficiencies of the old civilization, we imported into our schools a method as humble as the English sparrow--simple analysis--but now, the immensity of our success threatens with Toynbeean predictability to overwhelm us.  Like the thinker whose brilliance we universally acclaim, Alfred North Whitehead, we have cultivated a perverse form of modesty and self-deception that, in the absence of dogma (the working yet scientifically undemonstrable hypotheses of the old civilization), has allowed us to forget who we are and what our purposes are, as well as to neglect to teach these lessons to our children."--David V. Hicks, Norms and Nobility (1981)

"Now you must remember, whenever you have to do with him, that Analysis, like fire, is a very good servant, but a very bad master. For, having got his freedom only of late years or so, he is, like young men when they come suddenly to be their own masters, apt to be conceited, and to fancy that he knows everything, when really he knows nothing, and can never know anything, but only knows about things, which is a very different matter. Indeed, nowadays he pretends that he can teach his old grandmother, Madam How, not only how to suck eggs, but to make eggs into the bargain; while the good old lady just laughs at him kindly, and lets him run on, because she knows he will grow wiser in time, and learn humility by his mistakes and failures, as I hope you will from yours."--Charles Kingsley, Madam How and Lady Why (1869)
Posted by Mama Squirrel at Monday, August 29, 2011 No comments:

Where we went yesterday 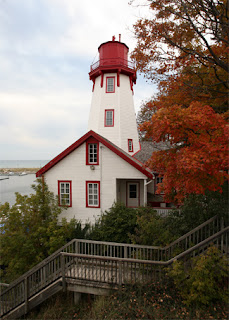 Photo of the Kincardine Lighthouse found here, along with the story of the Phantom Piper.

SOME of the Squirrels made it all the way to the top.

And some of us wussed out.  I guess we wouldn't have made good lighthouse keepers.

Hit the Northrop Frye motherlode...or, The calm before the storm

Yesterday was our thrift store volunteer afternoon.  The wind was blowing a bit and there was a tornado warning when we arrived after lunch...but not much seemed to be happening, at least outside.

Inside, there was an absolute wall--we're talking room-divider size--of cardboard cartons of books.  Yow!  Even the book-happy among us quailed a bit at that.  And there were already quite a few books on the sorting shelves needing to be priced and move out to the store.

But we dug in.  There really was some good stuff in there, all kinds of books...sometimes when there's a big load like that, they're all one kind of thing.  Like somebody's entire self-help library from the 1980's.  This was more of a mix.  Of course there were some many books that hit the recycle box, but there were some neat things too.  A boxed set of the Borrowers books.  Hardcover biographies of Joseph Conrad and Alec Guinness.  A vintage copy of Through Gates of Splendour.  Lots of classics.  One Mitford book.

But the only things that Mama Squirrel actually ended up buying were three Northrop Frye books, ones we didn't have:  Words with Power, Spiritus Mundi, and Northrop Frye on Shakespeare.  Yeah!

Did the book mountain shrink at all?  Just a bit.  Mama Squirrel estimates that she cleared out between six to eight cartons in three hours, which does not sound like a lot, but we had to spend time pricing and shelving what was already there plus what came out of the boxes.  And then the receiving guys brought more in...

Ponytails helped Mama Squirrel some with the books, and then helped another volunteer price VHS movies...lots and lots of them.  Crayons tidied toys and did some miscellaneous jobs.  I think she helped with the movies too.

The Apprentice (who had been working all day at the hair salon) picked us up after four, Mama Squirrel slid some fish sticks in the oven to go with Crockpot vegetables and salad, Mr. Fixit came home, and we all went out to look at a potential new Treehouse (don't get too excited, it was just a look) and to pick up bananas and milk.  The wind was starting to blow and it was just spattering rain when we got home.  Mr. Fixit and The Apprentice started putting together a new bookcase for her room that arrived yesterday morning (the bookcase, not the room).  (Mama Squirrel is getting the old bookcase, and she's happy about that.)  Mama Squirrel found some funky jazz to listen to on the CBC.

And then our real evening entertainment?
Posted by Mama Squirrel at Thursday, August 25, 2011 No comments:

Yes, we buy cold cereal. It may not be frugal but it's part of our life. We do try to stick to the healthier/cheaper varieties, and there are certain sugar limits beyond which Mama Squirrel will not budge.

What do you do with the end-of-the-box crumbles and bits? I save them in a plastic container and use them for baking...usually pulverized in the food processor. Works very well in dried-fruit balls and chocolate-raisin balls, but you can also use them in muffins or oatmeal cookies. I figure we paid for that shredded and puffed stuff, so we may as well use every bit of it up.

What do you do with the boxes? You can use the cardboard for gluing patterns to. You can cut them down a bit to make magazine holders. But if you really want to see how good cereal boxes can look, check out this link at Frugal Family Fun. Wow!
Posted by Mama Squirrel at Sunday, August 21, 2011 No comments:

Tonight I invented a skillet pasta casserole, and since the major ingredients were leftover roast beef and zucchini, I'm calling it Roast Beef Ratatouille.  Dessert was Crockpot Snack Mix, yogurt and fruit.  (Not all in the same bowl, just on the table.)

This is an approximation of the main dish:

In a non-stick skillet, heat the oil and add the cooked meat and mushrooms.  When the mushrooms start to release some juice, add the other vegetables and zucchini relish.  Let cook gently until the vegetables are done but not mush, the tomatoes are popped, and the meat is heated through.  Stir in a bit of sour cream (optional) and top with cheddar cheese (put the lid on and keep cooking until it's melted).  Either serve with hot pasta, or (what I did) stir the cooked, drained pasta into the meat and vegetables to soak up some of the liquid.
Posted by Mama Squirrel at Tuesday, August 09, 2011 No comments:


I hardly ever make fried rice, and it doesn't always turn out that well for me, but I was happy with this batch, and it went well with the chicken.  I used part frozen Oriental vegetable mix, part fresh zucchini, green pepper, garlic, and mushrooms.  Instead of mixing in the egg at the end, which I've never liked much and which isn't good for Mr. Fixit's egg sensitivity, I beat up two eggs and cooked them in the frying pan first, omelet-style.  I rolled up the omelet, cut it in small strips, and served it along with the rice.

The cake?  That was an experiment. We had exactly a cup and a half of bulk-purchased gluten-free chocolate cake mix in the cupboard; I wanted to use it up, but it didn't have to be used in a GF way.  So I mixed it with half a cup of all-purpose flour, half a cup of brown sugar, two teaspoons of baking powder (there was some in the mix, also some sweetener, but just in case), a cup of milk, a third cup of oil, an egg, and a teaspoonful of vanilla.  This is more or less a standard muffin recipe, except that it's chocolate.

I spread half the batter in an 8-inch square pan, dribbled the end of a jar of thin berry jam over top, sprinkled that with frozen raspberries, topped that with the rest of the batter, and sprinkled the whole thing with a small handful of chocolate chips.  I baked it in the toaster oven at 350 degrees for about forty minutes, when it tested done.  It worked! Good with plain yogurt.  Probably best stored in the fridge, because of the fruit.
Posted by Mama Squirrel at Friday, August 05, 2011 No comments:

Email ThisBlogThis!Share to TwitterShare to FacebookShare to Pinterest
Labels: raspberries, What's for supper?, what's in your hand

Ouch quote for the day

"She glanced at her watch.  It was a little after eleven o'clock.  An hour ago she and Rusty had set out.  Pity Robert wasn't here.  He was the one who loved history.  Robert had brought Plutarch along on their honeymoon.  And worse, had found time to read it."--from Abraham Lincoln: a novel life, by Tony Wolk
Posted by Mama Squirrel at Monday, August 01, 2011 1 comment: