Wednesday Hodgepodge: In Season and Out

1. In two or three sentences describe yourself to someone who has never met you.

Squirrels collect and store whatever they find, sometimes to their own detriment. I do collect some physical things, but I'm more likely to run around collecting up words and ideas. 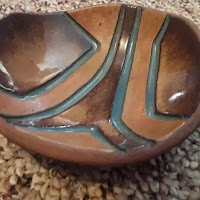 When my little backpack is full, I try to put them back together and give others something to chew on. Metaphorically speaking. 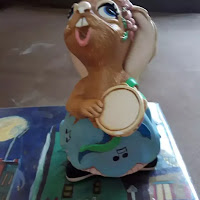 2. Will you celebrate Halloween this year, and if so tell us how? Let's play this or that-chocolate candy or fruity candy? pumpkin seeds or pumpkin pie? Halloween party or scary movie? hay ride or corn maze? carve a pumpkin or paint a pumpkin?

It's not a big deal for us, and we hardly ever get trick-or-treaters. 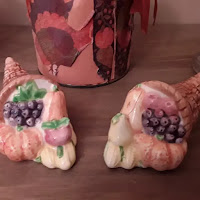 We might watch a semi-scary movie and eat some of the little chocolate bars that we bought with the full knowledge that we might get, like, one kid knocking on the door.. 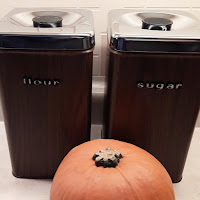 The stores are full of pumpkins right now, so I bought a small one and turned it into pumpkin bars yesterday. 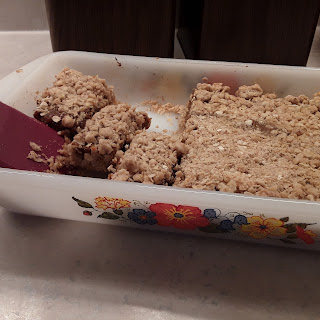 3. What's something that scared you when you were young? Are you still afraid?

I suppose coffee is disqualified?

Celestial Seasonings Bengal Spice tea, a.k.a. caffeine-free chai. Drinking it reminds me of past poetry teatimes with our kids. 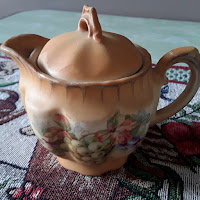 5. Are you thinking about Christmas yet? Does this make you feel happy or stressed?

How 'bout we keep that one for another hodgepodge. 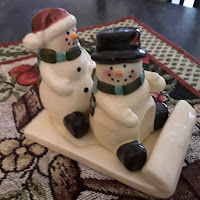 How is it that fall doesn't technically end until the winter solstice? I think we should have extra seasons, like they do in Japan; because right now we're getting near the end of orange-leaves-on-the-trees, heading into I'm-not-sure-what-season-November-is-but-it's-cold, and looking towards get-out-the-boots. 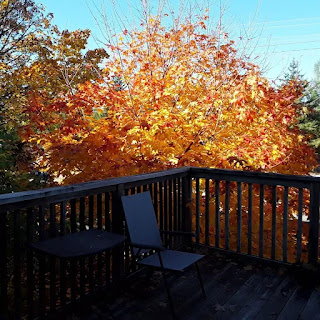 In keeping with not being sure what season we're in, yesterday I thrifted a sleeveless linen-blend dress, more or less for next summer. (And did I have a hard time photographing a black dress on a dull day? Eventually I gave up and hung it on the bathroom door. Not elegant, but at least you can see it.) 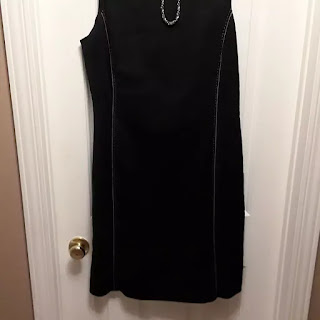 But we can always layer up until then, right? 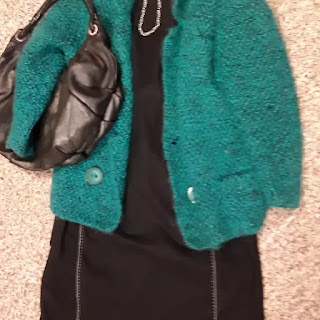 Linked from The Wednesday Hodgepodge at From This Side of the Pond.
Posted by Mama Squirrel at Wednesday, October 26, 2022 6 comments: 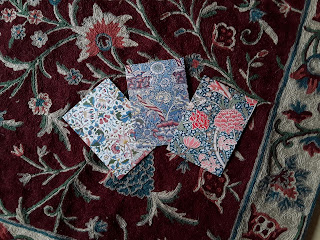 Her favourite clothes site, The Vivienne Files, has done lots of posts on Tote Bag Travel. And this weekend she's getting her opportunity. She's been asked to address a group of educators at an overnight retreat; and her topic is William Morris, of all things. William Morris was not a teacher, but he was an observer, and a thinker, and a maker, and a learner. He cared about history, he cared about nature, and he cared about people living with beautiful things around them. So there's lots to say about him.

She has a list of extra things to take along, like art books to display; so she wants to keep her own luggage  to a minimum. She figures out what she wants to wear on the drive there and for the first evening: black jeans, a grey top, and a vintage cardigan, along with her Allbirds Mizzles because the weather's been wet and there have even been a few flakes of snow. 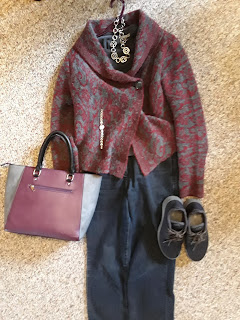 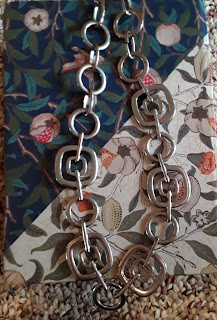 She has a warm jacket, hat and gloves along as well, although they may be a bit much in the car. 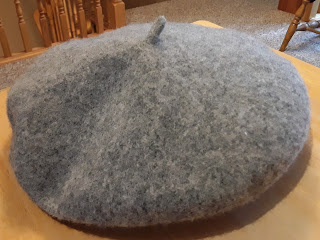 She decides to take a satchel instead of a smaller purse, because she's going to be carrying things around like notes, her tablet, and a re-useable coffee mug. Also a pair of scissors, because the participants have been told they're going to be doing something crafty. William Morris would surely approve. 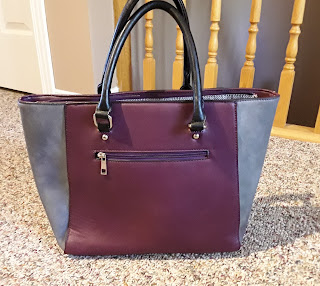 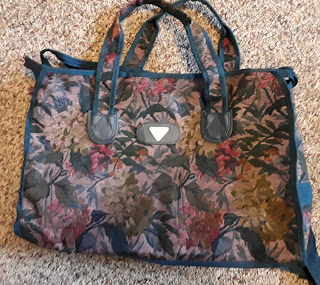 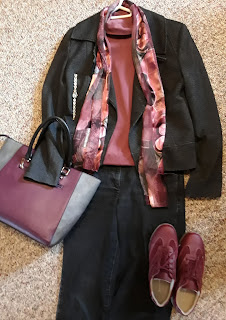 A pink turtleneck, a scarf, a black moto jacket, and a pair of burgundy lace-up shoes. 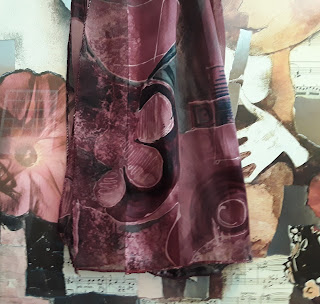 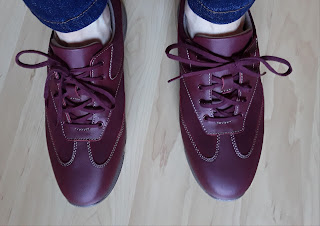 Plus nightwear, socks, a toothbrush, and those sorts of things. That's really all she needs.

Well, and a favourite pair of earrings. 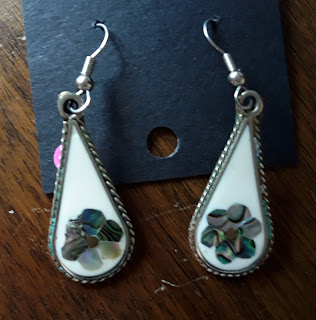 Bracelets and a watch. She might not wear the bracelets (too clunky when she's doing her talk), but she's going to slip them in just in case. 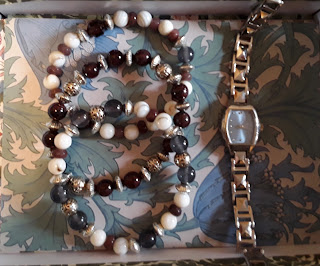 Her daughter just gave her a bottle of Sinful Colors nail polish in a sparkly shade called Hush Money. Odd name, nice colour. (She'll do that before she leaves.) 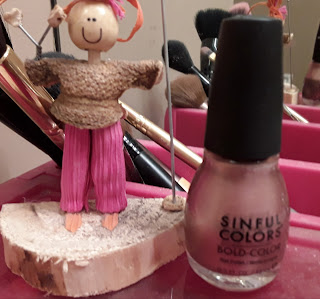 So, rain and cold be darned: it's going to be a cheerful weekend with good friends. 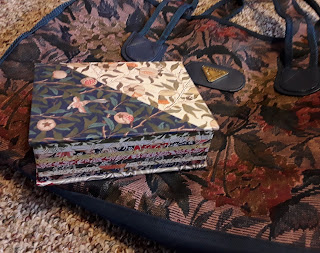 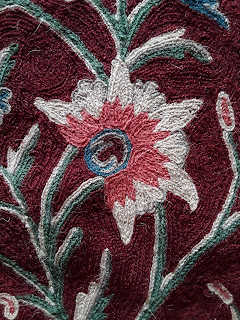 1. What's something you wish you'd figured out sooner?
You don't have to put everything you own in your suitcase. The things you don't take will still be there when you come home.
That sounds like I spent my childhood as a refugee or something, but really it was more about being completely clueless as to what one might actually need for a weekend away vs. what might be stuffed into one's vintage hard-sided junior suitcase. Like a week's worth of library books, vs. an extra pair of shoes. 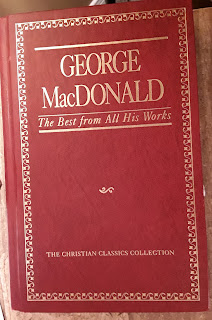 2. Something from childhood you still enjoy today?

Complete transparency here. Over the last while we've been able to buy those variety packs of small boxes of cereal at the local supermarket. The kind that we used to break open on the lines and eat right out of the box. We don't do that anymore (I think they took the lines out years ago). But, while I would not be buying an entire box of Frosty Frooklers or Frooty Flippies, an occasional single serving does break up the "usual" of Semi-Healthy Oaty Circles or Shredded Shrickles.

3. Are you a fidgeter? What's the first thing that comes to mind when you hear the word fidget?

Fidget the Bat in The Great Mouse Detective. 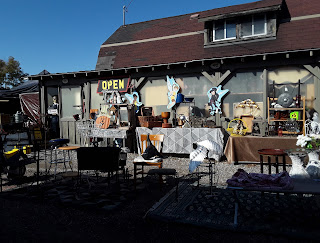 When we feel fidgety  we go to the flea market.

4. Your favorite fall vegetable? How do you like it prepared?

Butternut squash, I guess. It's the least loathsome of the tribe.

I slice it up, cook it in a little water, then add butter, sage, pepper, and brown sugar. 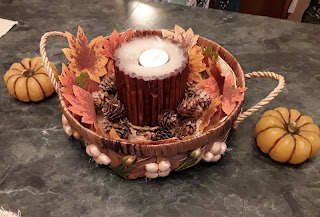 5. What's something you find mildly annoying, but not annoying enough to actually do anything about? Might you now? 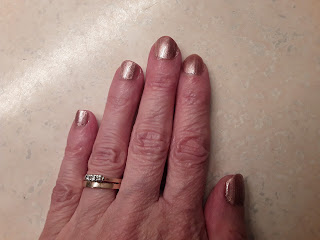 On the other hand, I did clean out my baking cupboard because I was tired of having the same spatula always fall out when I opened the door.

After much summer same and September standard, it's time for October Out of the Ordinary. Having long graduated out of the junior hard-sided and tossed my '80's parachute luggage, I've worked my way through a series of thrifted and scrounged backpacks and carry-ons, and...I still haven't found what I'm looking for. But I have figured out how to stuff a duffel for an overnight Charlotte Mason homeschooling retreat, which is what I'll be doing this weekend. 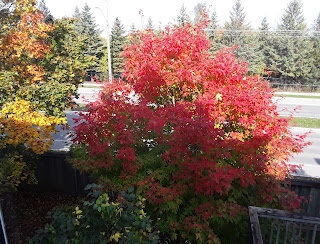