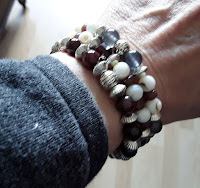 For almost a year she has admired the Sophisticated Lynx bracelets, from Fierce Lynx Designs. The Vivienne Files first described them as having "the nuances of color...deeply hidden in the stones, revealing themselves only to the attentive observer." That intrigued her so much that did her own version of the V.F. story. But she finally has her own set of bracelets, and now she's going to observe attentively and plan a mostly-thrifted early-winter wardrobe around them.
In a time when everyone is, supposedly, more focused on going out and doing things than they have been for awhile, she begins at the other end, with an oversized poncho sweater that's definitely a homebody. The big  collar is a bit overwhelming, so she prefers to wear it tucked in. 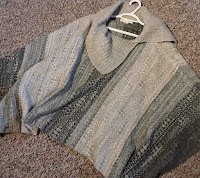 She found this red and grey cardigan at a flea market.
It's less couch-potato than the poncho, but still very cozy. 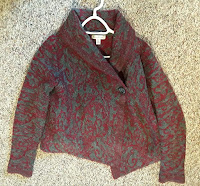 She was going to include a grey cardigan, but with the popularity right now of shirt jackets (isn't "shacket" an ugly word?), she decides on a more structured fleece jacket. 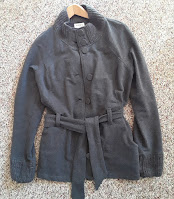 You can read the whole page here.
Posted by Mama Squirrel at Thursday, October 28, 2021 No comments:

1. Is Halloween a big deal in your neighborhood? Was it something you celebrated as a child? With your own children? Do you like candy corn?
As a holiday, I can take or leave it. This is the third place in a row we've lived that, for various reasons, never attracts many trick-or-treaters even when the weather's good; so we buy one small just-in-case package of candy, and usually end up eating it ourselves. Watching a somewhat scary movie is about the extent of our observances.

2. Are you a scaredy cat? About what?

About the same amount of things as Zero Mostel here.

3. Last time you were somewhere that should have been busy but felt like a 'ghost town'?

Last weekend! Mr. Fixit and I went away overnight to a town that is always super-busy during the summer, but right now seems to be experiencing a worse-than-usual off-season. It's a place that we usually visit during the day, so we're familiar with the breakfast/lunch places but weren't sure where to go for dinner. We found a place that sounded good (and reasonable), and it was.  But here's the funny thing: while we were sitting there, it was like deja-vu: Mr. Fixit said, isn't this the place...and I said, yes, I think so. We brought The Apprentice here she was four months old, when we were still such new parents that we didn't think that adding a baby to our usual adventures should be much of a hassle, and the three of us went out to dinner, at a place I couldn't have told you where, and she screamed her head off through the whole meal, for no particular reason except that she was four months old. We had to take turns eating and walking up and down and inside and out with the baby. And that was the same restaurant where we ended up this time.

The next morning we got up, ate some free breakfast in the lobby (okay, but not great), and thought we'd check out a small farmer's market we'd read about online. We got there, and it was closed for the season (the website was wrong).

So we thought we'd drive to an antiques barn just north of town. But the door was padlocked and there was no sign of anybody.
So we thought we'd check out a gallery of photographs upstairs in the town library. The library was open, but the gallery was closed. They were very apologetic. By this time we were just laughing, it seemed like everything in town was shut down.
But we did stop into a Salvation Army store. That was open. And we found a watercolour painting by Beatrice Hogan, an artist we used to know slightly through family connections. Anyway, we just really liked the painting, and for eight dollars, it was totally worth it. 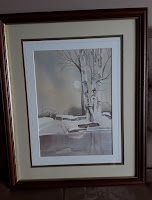 And then we went to our usual breakfast-lunch place and had some decent food before we left town.

4. Do you like chili and if so how do you like it? Beans or no beans? Meat or no meat? Beef or chicken? Spice or no spice? Favorite toppings?

Beans, any kind of meat (or no meat), not too spicy, some cheese. I usually make a basic recipe from the Tightwad Gazette books, but sometimes we experiment with white chili.

5. Would you describe yourself as a night owl? What time of night qualifies? What are you doing while everyone else is asleep? Do you then 'sleep in'? Define 'sleeping in'.

When I was single, I used to stay up late, but marriage to someone who had to start work early reformed me.