The Intentional Thrifter: Before and after

Remember this coat? It wasn't bad, but it needed freshening up. (I also removed the shoulder pads.) 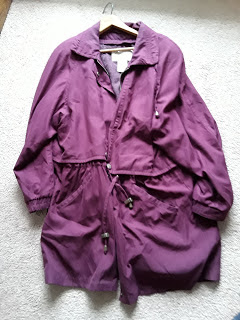 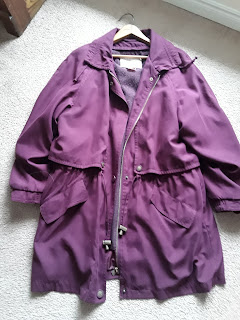 There's still a place in the world for neighbourhood dry cleaners.
Posted by Mama Squirrel at Wednesday, October 31, 2018 No comments:

Quote for the day: How'd you get so smart?

"A classic example of [Dayton] Allen's humor comes from an August 1968 appearance on The Steve Allen Show, syndicated nationally in the USA by Filmways: "Did you know your mind alone can make you smart?""
Posted by Mama Squirrel at Sunday, October 28, 2018 No comments:

From the archives: What CM teachers really need

We have principles, tools, and a whole world to explore.
It means that we can stop worrying what the lady at church thinks.
It also means that we have a greater understanding and purpose when we do choose learning materials.

So what does one need for teaching?  (Also here)

One or more persons, also known as children (also here)

The principle of authority, used wisely

The principle of obedience, taught well

The respect due to the personality of children

Three educational instruments--the atmosphere of environment, the discipline of habit (also here), and the
presentation of living ideas (also here)

All the knowledge that is proper to children, communicated in well-chosen language

A vast number of things and thoughts: so we train him upon physical exercises, nature lore, handicrafts, science and art, and upon many living books (also here), for we know that our business is not to teach him all about anything, but to help him to make valid as many as may be of "those first-born affinities that fit our new existence to existing things."

The way of the will

The way of reason (also here)

The Divine Spirit who has constant access to their spirits; their Continual Helper in all the interests, duties and joys of life.

~~ Charlotte Mason, "20 Principles," found in Towards a Philosophy of Education and elsewhere
Posted by Mama Squirrel at Monday, October 22, 2018 No comments:

Email ThisBlogThis!Share to TwitterShare to FacebookShare to Pinterest
Labels: Charlotte Mason, education, Principles of Education, teachers, teaching, Treehouse Archives, Way of the Reason, Way of the Will

The Intentional Thrifter: When you find what you need

I have been looking for a white shirt for awhile. I was being picky: it couldn't be too menswear-looking, but it couldn't be frilly either. This cotton shirt fit the requirements: hidden buttons, no pockets, mostly cotton. One easy fix required: a loose button. 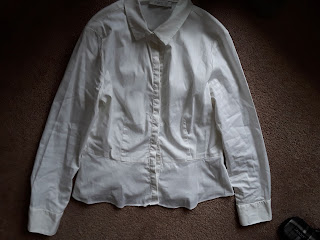 Same shirt with a pullover. 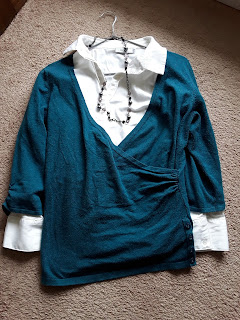 Same shirt with a jacket. 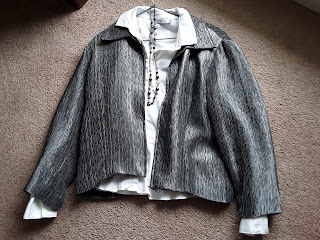 The other thing I needed and found: a coat. This one has a zip-out lining, and it's a nice colour. It won't work for long hikes in freezing weather, but it should be okay for everyday ins and outs. Fix required: it needs cleaning. 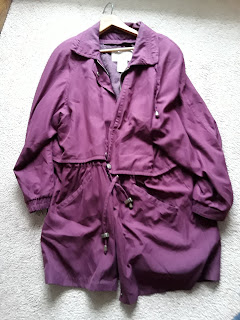 One book to use for a class project. 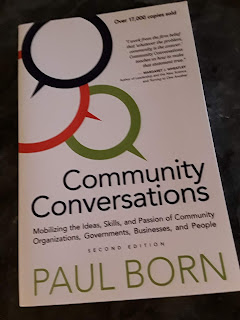 Thrifting: what would I do without it?
Posted by Mama Squirrel at Friday, October 19, 2018 2 comments:

A hundred uses for that

Did you ever have to do one of those tests of creativity, like "Can you list ten uses for a flowerpot besides growing flowers?" Or paper clips, or rubber bands. Being Squirrels, with a bit of packrat wired in, we like to store things up. Being more minimalistic Squirrels in a small nest, we like things that are multifunctional. And if things don't come with extra functions, we find them some. 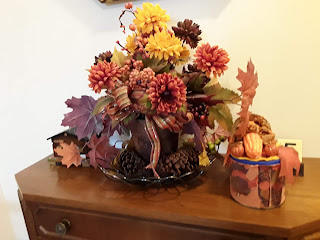 Fake flower arrangement, bought on clearance at Michael's five years ago. Wire basket, thrifted last spring. Pinecone things, from a dollar store two years ago. Paper-covered can, decorated by a Squirreling many years ago. Wooden cottage (behind the pot), from Mr. Fixit's childhood.

I thrifted a new-with-tags-but-several-years-old scarf, which came with a detachable chain necklace. There's a You-tube video still online that shows all the things you can do with it: wear the whole thing together, pop the chain off and just wear the scarf, turn the scarf into a belt, or wear the chain as a necklace or a bracelet. All that for two dollars. Fashion critic Mr. Fixit gave a "meh" to the whole-works look, but he liked the necklace by itself. (He also fixed one of the strands of chain that had somehow gotten broken.) 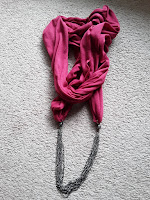 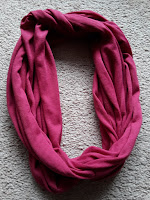 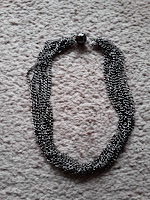 And that's the point: you may own a whole-thing item you don't like, or can't use, or that doesn't work in the way you used to use it; but maybe you can use half of it, or turn it backwards or inside-out. One person's junk...but what about your own "junk?" Is there a way to re-use what you already have? Do you have to go buy an extra new whatsit, or do you already have one and just not notice? (Try searching "things to make with Lego," if you want to see real creativity.)

I sewed several of these weighted device-holders four years ago, as Christmas gifts. They are also handy to hold greeting cards, postcards, or small books. 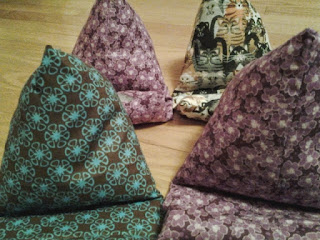 Recently I wanted to display a small plate, but couldn't think how to make it stand up. Device-propper to the rescue, disguised with a doily. 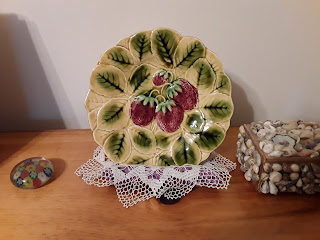 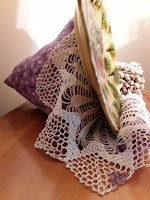 Basket with wooden base, thrifted a year ago 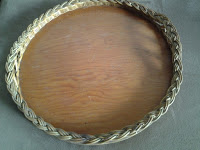 What we used it for last Christmas 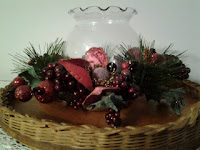 What we used it for this month, for Thanksgiving (I lined the bottom with waxed paper and then coloured paper) 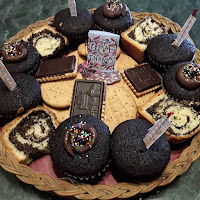 So...what are ten new ways to use a flowerpot?
Posted by Mama Squirrel at Monday, October 15, 2018 No comments:

From the archives: "The Planet of Bad Thinkers"

First posted October 2012. Lydia was in Grade Six, and this was one day's work.

After the man (Adam sinned), he tried to cover himself with the works of his own hands (how?). God took this away and gave him a covering of what? So this shows that people could not come to God by their own good works, but by what? (page 24) Look up Genesis 4:3-5. How does God ask Adam and Eve (and their children) to worship him? What picture does this give us of the promised Messiah?

Minds on Math 8, page 76 and 77.   Application problems for fractions

Write Source 2000:  Last week we read about the "Planet of Bad Thinkers," a place where the inhabitants never set goals, never ask questions, ignore evidence, believe whatever they read, and so on.  We tried to turn those ideas around to list ways of "Becoming a Better Thinker."  Section 309 describes how your mind circles around from simple to more complex tasks while you work on a project.  Section 310 shows a chart of thinking "moves" from simple (observing, gathering) through more complex (rethinking, evaluating).  Choose a real or imaginary problem similar to the examples in section 308 (How can I...Should I...Is doing this activity worthwhile...I've got to convince my parents that...), and try to come up with a solution by tracing your way through the chart.  OR choose a picture book or children's story from our shelf, and show how the main character tries to solve a problem by using this kind of thinking process.

Put the books down and go for a walk. 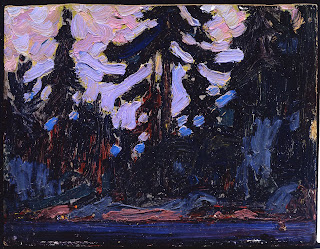 Plus, I'm aware that my current "happy wardrobe" is not exactly a tiny wardrobe. Courtney Carver is the first to say that her numbers may not be your numbers, but still there's a difference between "33, everything" and "60+, not counting anything except clothes." I can't imagine counting sunglasses as an item (although Courtney does),  and I also don't find that scarves and belts cause decision fatigue; but it doesn't seem fair to say you're playing the game if you ignore all the rules. 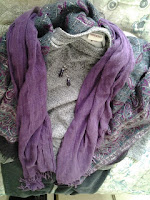 So if I had to map out a core of autumn basics, I'd probably choose these, as the most multi-purpose and multi-weather things I own.

Read the rest of the page here.
Posted by Mama Squirrel at Tuesday, October 02, 2018 No comments:

There is nothing new about decluttering

Our local paper has a story today about the latest celebrity declutterer. She's said to be different from (list of other clutter experts) because she doesn't turn it into a spiritual exercise. Two paragraphs later, she's extolled as a "guru" who promotes "healing." Sigh. You can't have it both ways.

(This same expert boasts that she's so paper-free, she owns only two pieces of paper, both official documents.)

Do we use our stuff, or does it use us? It's not a new question (Ecclesiastes 5:13, for one). Does what we want, or what we spend on getting it, or how we store it, cause stress, create hazards, or strain relationships? If this didn't seem like a bigger problem than the occasional Mount Laundry, the newspapers wouldn't be running decluttering stories.

Let's invoke some reality. There are life situations that, by their nature, involve some clutter.  It may not be pathological at all, more just about having a hard time keeping on top of the material stuff when there are other demands. Clutter-free counters are less important than making sure everyone can get at what they need. Small people who can't reach up, or any people who can't reach down, or who need visual reminders to take their vitamins or whatever, take priority over empty spaces.

The bigger problems seem to be the amount of stuff (expensive or cheap, new or thrifted, keepable or trashable) that comes into our homes; making the best use of it while we allow it space in our lives; and then letting go when its value is gone. That last is more of a problem than you'd think. I read an article recently with low-clutter gift suggestions for children, many of them paper (ironically). One was a cardboard playhouse that could easily be recycled when its time was over. Great idea, but at our house a few years ago, give-it-up time would have been never. When everything receives equal emotional investment, decluttering is not an option. (I had a cardboard house as a small child, and remember hours of neighbourhood tea parties and other goings-on inside it; but I wasn't consulted about its ultimate disposal. That may be the difference between parents in 1970 and 2010.)

So maybe the tritest slogan is also the truest: don't spend your energy loving things that can't love you back, or that may even be imprisoning you. (Textbook case: Mrs. Piggle-Wiggle, "The Won't-Pick-Up-Toys Cure." Bible case: camels and needles' eyes.) If your stuff is working for you, even if it's a mess, just clean it up when you get time. But if it's moved into neutral or negative, look at it with a sterner eye. You don't owe your things a thing,
Posted by Mama Squirrel at Monday, October 01, 2018 No comments: