More Random Reasons to be Happy

1. Green beans growing up the side of the house are finally getting beans on them.

2. Ambleside Online Year 11 is more-or-less finished, after many hours of pre-birthing pains with the Ambleside planners and some equally wonderful book reviewers and researchers who helped us out.

One thing that would make Mama Squirrel's world a bit brighter would be if the CBC radio strike would end; she misses her favourite shows although the canned classical music is okay too.
Posted by Mama Squirrel at Sunday, August 28, 2005 No comments:

The Squirrels have a pile of magnetic letters and numbers--the kind that aren't supposed to be safe for little ones because the tiny magnets in them might come out. Some of the letters are thirty-five years old and the magnets are still intact, but that's not the point. Because there are parts of about four different sets, it's hard to make one whole alphabet (we have about five capital E's but not one capital I). However, Mama Squirrel came up with some homeschool possibilities for them this week (besides just sticking them all over the fridge, which is what the squirrelings mostly did when they were toddlers).

1. Mama Squirrel and Crayons just sorted out the letters into two (more or less) capital-letter alphabets plus small piles of lower-case letters and numerals. We've done the same thing with rubber letters.

2. Preschool memory game: make a row of about four to six letters or numbers (or more if you want to make it harder). Hide your eyes and the other person hides one or two of the letters. What's missing? (Crayons played a funny trick on Mama Squirrel: she hid one of the letters behind her back and replaced it with another one the same. When Mama Squirrel said she hadn't taken anything away at all, Crayons showed her how duplicitous she had been.)

3. Preschool sorting game we haven't tried yet: take a handful of capital letters and a handful of lower-case letters (we only have a few of those anyway) and sort them into two piles, capitals and lower-case.

3. Grade Three alphabetizing game: Take a handful of letters and put them in alphabetical order, as fast as possible. It doesn't matter if there are doubles.

4. Grade Three fractions game: Take all the numerals you can find and put in them in a container. Draw a line on paper to be the dividing line in a fraction. Pull two of the numerals out and put one on top, one on the bottom. What's the fraction? What does it look like? We had some plastic fraction pieces, marbles and other things sitting around while we did this, so we tried to come up with different ways of showing. Ponytails made 3/2, so she took three of the plastic "half" pieces. Mama Squirrel made 7/9, and there are no ninths in the plastic pieces, so she took seven blue marbles and two white ones, and said that 7/9 of the marbles were blue.

5. The obvious: spell things with the letters. Spill a handful and see who can make the most words the fastest. (Of course the squirrelings may not learn any "i" words, but Mama Squirrel will come up with something else for those.)

Moral: even incomplete things can still be kind of fun and educational, right?
Posted by Mama Squirrel at Sunday, August 28, 2005 No comments:

This morning Ponytails and I were reading "The Sick Rose" from William Blake's Songs of Innocence and Experience.

Oh Rose, thou art sick!
The invisible worm
That flies in the night,
in the howling storm

Has found out thy bed
Of crimson joy.
And his dark secret love,
does thy life destroy.

Crayons climbed up on the couch and waved her hands over my head. She explained, "I'm putting some water on you."
Posted by Mama Squirrel at Thursday, August 18, 2005 No comments: 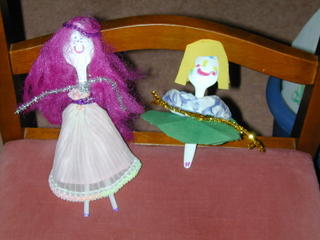 Crayons did not get her nickname for nothing. Lately no toilet paper tube, no box, no piece of paper has been safe from her creativity. Earlier this week she told me, "I want to make a paper plate caterpillar. I need paper plates and pipe cleaners." "Where did you get that idea from?" "I saw it on TV. So I have to make one, how about now?" (About five minutes before bedtime, this was. She finally agreed to wait until the next morning.) She did it almost all herself, with a little help punching holes to hold the paper plates together, and Mr. Caterpillar is now on the kitchen wall.

She also brought a book we have that has photographs of dollhouses and dolls, not understanding that this wasn't a craft book, and showed me a photograph of some rather weird-looking dolls. (Parental warning: preview before showing this picture to kids, one doll is a little exposed.) "Can we make this one?" Never one to say no...wait a minute...don't those faces look like white plastic picnic spoons? Which we just happened to have...aha. So, picnic spoon, pipe cleaner and straws for arms and legs, some fuzzy yarn for hair, and a Crayons-created marker face...which looks much happier than the original...and we have our dolly.

And then there are the toilet paper tubes I keep picking up that somehow have been turned into people...how can you throw those out?

(Addendum: Ponytails made a doll later; hers is the one with the yellow hair, on the right.)
Posted by Mama Squirrel at Sunday, August 14, 2005 4 comments:

Email ThisBlogThis!Share to TwitterShare to FacebookShare to Pinterest
Labels: Crafts, Mind of Crayons

Last week I got my ears pierced. Today is a week after I got my ears pierced, so today is my earrings' anniversary. The Apprentice got hers done too. The lady who did my ears took the gun and she put the earring through the gun, and clicked the button, and shot it into my ear. And it hurt! I'm being honest. :-P Actually it stinged, not hurt. She gave me heart earrings instead of balls. The Apprentice got balls. Coffeemamma, Ponytails is telling B that it doesn't hurt VERY much to get your ears pierced, and the stinging doesn't last long. It's over fast.

We started school and we finished Five Children and It. It was fun. Now can we watch the video, please???
Posted by Mama Squirrel at Friday, August 12, 2005 1 comment:

The deed is done

In recent Treehouse news, Ponytails and the Apprentice survived having their ears pierced and are looking forward to being able to take their studs out THE SAME WEEKEND AS PONYTAILS' BIRTHDAY. (Ponytails wants everyone to know that.)
Posted by Mama Squirrel at Thursday, August 11, 2005 3 comments:

Email ThisBlogThis!Share to TwitterShare to FacebookShare to Pinterest
Labels: Treehouse

And the answers are...

1. They waved their handkerchiefs until they turned the corner from New Dollar Street into Elm Street. Now they could no longer see the yellow house. Good-by, yellow house! Good-by!

The Moffats, by Eleanor Estes

2. That room was full to the brim of something beautiful, and Betsy knew what it was. Its name was Happiness.

3. The other [thing] is that back in our own world everyone soon started saying how Eustace had improved, and how “You’d never know him for the same boy”: everyone except Aunt Alberta, who said he had become very commonplace and tiresome and it must have been the influence of those Pevensie children.

The Voyage of the Dawn Treader, by C.S. Lewis

4. None throws away the apple for the core.
But if thou shalt cast all away as vain,
I know not but ‘twill make me dream again.

Pilgrim's Progress, by John Bunyan (the poem that ends Book I)

5. The mouse hurried to his safe home.
He lit the fire,
he ate his supper,
and he finished reading his book.

6. And Montmorency, standing on his hind legs, before the window, peering out into the night, gave a short bark of decided concurrence with the toast.

Three Men in a Boat (not to mention the dog), by Jerome K. Jerome

7. To begin perfect happiness at the respective ages of twenty-six and eighteen, is to do pretty well; and professing myself moreover convinced, that the General’s unjust interference, so far from being really injurious to their felicity, was perhaps rather conducive to it, by improving their knowledge of each other, and adding strength to their attachment, I leave it to be settled by whomsoever it may concern, whether the tendency of this work be altogether to recommend parental tyranny,, or reward filial disobedience.

8. If every one of them were written down, I suppose that even the whole world would not have room for the books that would be written.

The Gospel of John

9. I took her hand in mine, and we went out of the ruined place; and as the morning mists had risen long ago when I first left the forge, so the evening mists were rising now, and in all the broad expanse of tranquil light they showed to me, I saw no shadow of another parting from her. ALTERNATE ENDING I was very glad afterwards to have had the interview, for in her face and in her voice, and in her touch, she gave me the assurance that suffering had been stronger than XXX's teaching, and had given her a heart to understand what my heart used to be.

Great Expectations, by Charles Dickens (he couldn't decide on an ending)

10. And Rose drew him in, and set him in his chair, and put little Elanor upon his lap.
He drew a deep breath. 'Well, I'm back,' he said.

For Canadians: you know that TV commercial where the one couple is driving across Canada in one direction, and the van of guys is going the other direction, and they're both stopping at every Tim Horton's they see and keeping a tally on the window?

Well, just in case you ever wondered exactly how many doughnut places that would be, the number of locations for each province (and the US states that have them) are online here. Please note which province holds the record for the most stores. We plead guilty, we like Timbits too.
Posted by Mama Squirrel at Tuesday, August 02, 2005 No comments: