Of birthday cakes and Raggedy Anns: a mom's life

In memory of Grandma Squirrel
1938-2008
My mother had a remarkable talent--which I do not share--for making things come out looking just like a magazine picture. Knitted sweaters. Smocked dresses, Halloween costumes, and Barbie clothes with impossibly tiny sleeves to set in. Birthday cakes covered with roses, hand puppets, painted ceramics, and rag dolls with dresses that matched their small owners'. About the only thing she never managed to do well was get everyone's heads in a photograph.

During an era when working outside the home took on a feminist face, she worked long, hard hours at jobs that had no glamour: teaching kindergarten, working for a catering company, taking orders at a flower store, wrapping chocolates in a candy store, clerking at Sayvette, and working in the supply room at the hospital. In between other jobs, she invented businesses: babysitting numerous children; making and selling wedding cakes, lollipops and Raggedy Ann dolls; baking cookies for the farmers' market.

And somehow she also had time for us. As preschoolers she read to us, helped us make all the crafts out of our Humpty Dumpty magazines, and helped us shape fondant and put toppings on the pizza mix--no takeout in those days! She bandaged the hurts and settled the fights, which usually meant kicking us outside for awhile. In those days you didn't think anything of telling a five-year-old to go ride her tricycle down the street or even go around the corner for a loaf of bread. We always made it back all right, and we always knew Mom would be there. When we took school lunches, there was no slopping bologna in a paper bag; we got cream cheese and cherry sandwiches, or maybe meat and pickle, with carrot sticks cut with a crinkle cutter. And she knew how to fold the wax paper so it stayed around the sandwich; I've never been able to figure that one out.

Mom was also one of my first Sunday School teachers. She was intensely practical, no-nonsense, organized, adult and frugal. And she occasionally got so tired of seeing herself that way that she had to invent a wild-and-crazy side, much like (if you ever watched Fraggle Rock) Boober's alter ego Sidebottom. This part of Mom usually surfaced on weekends away with my aunt and uncle, or when she was excited about going to a Burt Reynolds or Clint Eastwood movie, or when my dad's company had an Oktoberfest dance. Watching Family Feud or getting a small win on Wintario would do it too. She always liked a good New Year's party with a lot of yelling and kissing at midnight. It was very hard to take her by surprise, but we managed it just once, on her fiftieth birthday. I think it was the only picture we have of Mom with her mouth completely open.

She admitted to screaming at Elvis movies as a teenager, and often talked about a trip out west that she'd taken with some girlfriends before she was married: it sounded like the most fun and adventurous thing she had ever done. One year during university I wanted to go to Quebec City during Reading Week, but couldn't find any travelling company; so Mom and I went together. I think it was probably the only travelling that we had a chance to do just the two of us (trips to the orthodontist don't count). We had the most fun together that week, even though it was freezing cold: we ate duck with maple syrup, checked out all the craft shops, walked around when we could stand it and took taxis everywhere else. That was my mom, remember, who always worried about every penny, having a good time splurging.

Mom liked to try out new kitchen gadgets and recipes: I remember her granola and homemade bread period, and her experiments with the blender and the wok. But I think she sometimes found everyday cooking a chore, especially when she was working; so when I started making a lot of the dinners during high school, she was the most uncritical and ate the biggest helpings, even if it was Jamaican pigeon peas or fried tofu. She was sentimental about keeping anything and everything we'd ever made for her: Brownie Christmas decorations, shop-class flower shelves, and anything with a magnet on the back.

She liked to read: James Herriot, Erma Bombeck, the Rabbi mysteries, and the A is for Alibi books. She was a whiz at Boggle, Scrabble and crosswords; but never thought she had it in her to try anything very academic. When my aunt started taking university courses, Mom had the chance to audit a folk art history course with her. She loved it and wished she had taken the course for credit. I always wished she would have had the opportunity to try more things like that, but life went on in other directions.

Mom's stubbornness carried her through a thirty-year battle against her own body, against a nightmare of auto-immune issues and chronic pain, and against a medical system that is only now beginning to see the whole picture of women's health and wellness. She continued to make her own choices when she could, including moving to a care centre three years ago after a major health setback.

Mom lived as much for others as for herself. She gave away much of what she made, and found ways to care for others even when her limitations became overwhelming. Earlier this month she and Dad phoned me first thing in the morning to sing Happy Birthday: another tradition she never forgot.

I'm thankful that her pain is over. But I will miss her.
Posted by Mama Squirrel at Thursday, March 20, 2008 11 comments:

In a microwaveable bowl, put 1/3 cup of quick oats and 3/4 cup of milk. (The original recipe suggests adding a spoonful of nut butter for extra protein, but it works fine without it.) Cover loosely with plastic wrap. Cook on High for about 2 1/2 minutes; you're going to have to try this a couple of times with your own microwave to get it right. Watch it during the last minute or so; when you see it poof up as if it's going to boil over, it's done, turn it off. I usually let it sit a few more minutes while I do other things.

UPDATE: I figured out you can use large-flake oats for this too, and it's not as gummy. Just give it slightly longer to cook.
Posted by Mama Squirrel at Tuesday, March 11, 2008 No comments:

Email ThisBlogThis!Share to TwitterShare to FacebookShare to Pinterest
Labels: Breakfast

Guess what?
I went outside today and it smelled like spring sort of!
It smelled like mud actually.
But I guess it was a sign of spring even if tomorrow it's going to snow! 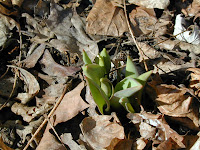 Email ThisBlogThis!Share to TwitterShare to FacebookShare to Pinterest
Labels: winter

I didn't finish that many books in February; the length of things got away from me. (Unlike the Deputy Headmistress.)

I did finish two more Mitford books: In This Mountain and Light From Heaven. (Reviewed earlier.)

I can officially say that I finished Little Sugar Addicts, after weeks of browsing.

I finished one Caroline book with Crayons and am almost finished Eleanor Farjeon's The Glass Slipper with Ponytails.

In process: I'm working through the book of Jeremiah, still working on John Piper's Desiring God, and am only a bit of the way through Incompleteness: The Proof and Paradox of Kurt Gödel.
Posted by Mama Squirrel at Sunday, March 02, 2008 No comments: