Isness? (Quote for the day)

The course I'm taking has us talking about ontology, which reminded me of something that Madeleine L'Engle wrote in A Circle of Quiet.


"...[Alan] reads me a quotation from Sartre about the isness of an oak tree; but Sartre felt depressed and threatened by this; the idea that the oak tree simply is seemed to diminish him. I suppose the perfect isness of anything would be frightening without the hope of God. An oak tree is, and it doesn't matter to it--at least Sartre thinks it doesn't; it is not a thinking oak. Man is; it matters to him; this is terrifying unless it matters to God, too, because this is the only possible reason we can matter to ourselves: not because we are sufficient unto  ourselves--I am not: my husband, my family, my friends give me my meaning and, in a sense, my being, so that I know that I, like the burning bush, or the oak tree, am ontological: essential: real."

Posted by Mama Squirrel at Wednesday, September 11, 2019 No comments:

Email ThisBlogThis!Share to TwitterShare to FacebookShare to Pinterest
Labels: adult education, Christianity, knowing who we are, Madeleine L'Engle, ontology, philosophy, Quote for the Day

Frugal Finds and Fixes: To Top That Off

We've been in our new place for several weeks, and it's starting to feel more like home. While we unpacked pretty quickly, there were still some unfinished bits and temporary messes...well, there are still things to work on, but the big needs are taken care of and the messes are fewer. I find Dana K. White's two cleaning-out questions very helpful, especially when it comes to large, strange assortments of stuff. Her first is "where would I look first for this?" Someone's bleeding--we don't have an obvious medicine cabinet in any of the bathrooms--so where's the first, easiest place I'd look for bandages? I think the cupboard right over the stove would make the most sense. But that still isn't where they are, so I need to fix that.

The second question is, "If I suddenly needed one of these, would it even occur to me that I already had one?" And, obviously, that I'd then know where to look for it. This is where White's Decluttering at the Speed of Life meets Marie Kondo: everything needs to have a home. It can be a weird home, but if that's where you'd most easily put it away (Kondo) and where you'd instinctively look for it (White), that's fine. I'm not sure which question or which voice I was following when I shredded some thirty-year-old work contracts (don't ask me why I still had them): just call it a Greek chorus of "no, it would probably never occur to you that you had those buried in the bottom drawer. Even if the chance in a million happened that somebody actually wanted to know what you got paid for two weeks' temp work in 1991."

I already posted about the amazing bedroom closet. I'm still full of awe and gratitude for that space. I attached plastic shower curtain  rings on the end of the bottom rack, and looped scarves through them. (I do better when I can see things than when they're hidden away.) 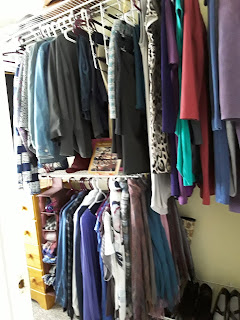 We re-purposed a metal decoration that had been hanging outside, for the kitchen wall. 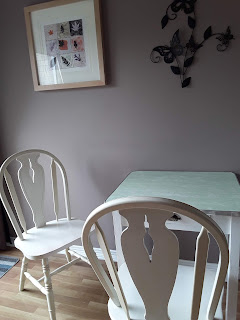 The plumbers finally came, fixed a few things, and replaced one bathroom sink. Mr. Fixit asked if I could make the boring brown bathroom more interesting, so I tacked a travel clothesline to the wall and pinned up some favourite postcards (I had mini clothespins from a long-ago craft project). 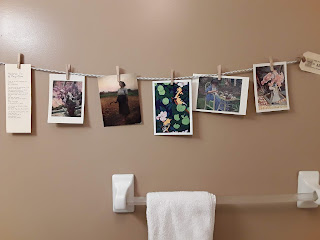 We found a ceiling fan for half price, for the upstairs bonus space. This is the best time of year to find deals on barbecues, fans, and patio furniture.

Mr. Fixit did a bunch of fixing, pulling out, and cleaning up in our little backyard space.

We've used some two-for-one hamburger coupons when we wanted fine dining with no cooking. We also improvised a pot of vegetable soup one night. The freezer compartment here seems to work much better than the one in the apartment, so we're planning to make freezer meals soon.

We've also been to a couple of early-fall yard sales. I didn't find much more than a box of stationery, but Mr. Fixit found a small vintage record cabinet to hold things in his not-in-the-dining-room-anymore workspace.

Speaking of workspace, I used mine to finish off a new study guide. (Just throwing that in.) 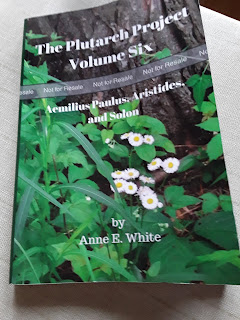 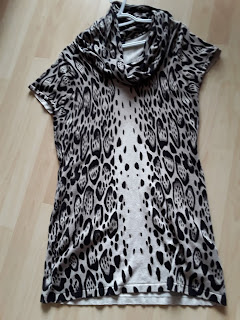 Later, I happened to be in the Mission Thrift store with Ponytails (not a usual thing, but it worked out that way); and I came across a blue cotton t-shirt. I would have bought it anyway, but I was a bit blown away by the label. If that name means anything to you, you'll know why. My very lucky day. 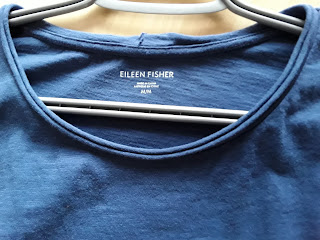 Finally, I got in a quick visit to the Salvation Army store last night while Mr. Fixit and Grandpa Squirrel were looking at Cruise Night vintage cars. This is what I found: a red leather vest with an embossed floral design. 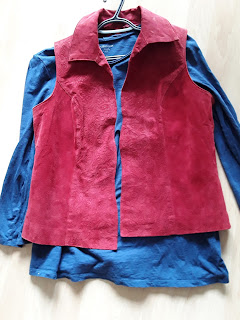 And that's hard to top.
Posted by Mama Squirrel at Tuesday, September 10, 2019 No comments:

Tom Thomson's The West Wind has the usual dark shades of water and hills, but it also includes bits of bright blue and dark red. To paraphrase this reviewer, there is nothing wussy about this tree: it's ready to take on the cold winds. 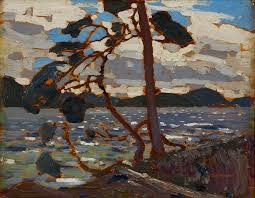 Read the rest of the page here.
Posted by Mama Squirrel at Sunday, September 01, 2019 No comments: