Thoughts for Sunday: the 2012 Circe Conference

Something to read and maybe post up somewhere:  "Why Contemplate Creation?", from the 2012 Circe Institute Conference that wound up yesterday.

Also:  Cindy's after-thoughts about the conference.

If you don't understand Cindy's references to the roof blowing off, that was literal.  A tornado made the conference a bit more exciting than planned--we are very thankful to hear about God's protection on all who were there.
Posted by Mama Squirrel at Sunday, July 22, 2012 No comments: 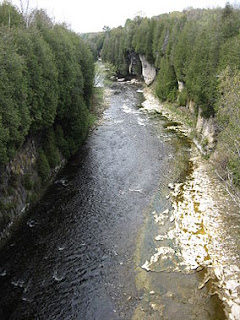 It was a sunny, hot afternoon, and we decided to make an impromptu trip to the Elora Gorge, to walk through the woods to the lookout, and to check out some of the shops in the town.

Elora has gotten more...I don't know, Euro-cized?...in the last number of years.  Brighter, more upbeat, more hip.  The river wasn't at its best, though--the drought has brought the water level down.  We saw someone fishing, but nobody was tubing or canoeing, at least that we could see.

But it turned out to be a good afternoon for just enjoying.

Photo found on Wikipedia
Posted by Mama Squirrel at Friday, July 20, 2012 No comments:

In the Treehouse: the teacher's desk

We were moving some furniture around in the Treehouse today. This is Mama Squirrel's new corner. 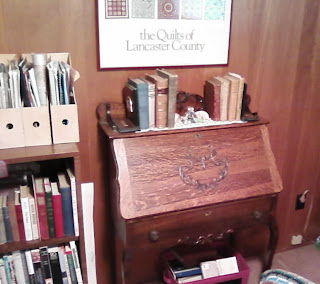 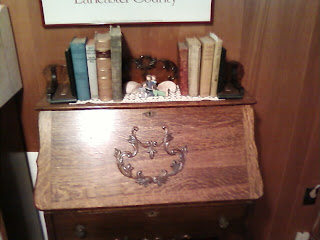 What's for supper? Dangerous chocolate cake in a cereal bowl

Chocolate cake in a mug (we make two and share them) Update: Every time I make these in mugs, it makes a mess. So I had an idea: cereal bowls work just as well and don't run over. And they're easier to share.

Oranges
Posted by Mama Squirrel at Thursday, July 19, 2012 No comments:

What's for supper? Keeping it simple

Dinner in half an hour:

Email ThisBlogThis!Share to TwitterShare to FacebookShare to Pinterest
Labels: What's for supper?, yogurt

It's too hot to cook much, so we made no-bake taco pizzas for dinner.  I adapted a recipe that I found in the Fix It and Enjoy It Cookbook, but it looked to me like one of those recipes that's been handed around everywhere, at baby showers and kitchenware parties.  The original recipe has a crust made from refrigerated crescent roll dough, baked in a large pan and then cooled before adding toppings and cutting in squares.  Also you're supposed to use typical Tex-Mex garnishes:  shredded lettuce, onions, tomatoes, olives. We just used mixed chopped peppers and cheese.

Our side dish was canned black beans, heated with a scoop of salsa.

Apprentice, if you're reading this, you should try it.  It would work with tortillas too.
Posted by Mama Squirrel at Tuesday, July 17, 2012 No comments:

It's always interesting to share your nuts with rodents outside of your tree, because other squirrels may not have tried that particular kind before. You never know if that particular type of walnut is something that only grows in your locale, or if your Mama Squirrel is the only one who seasons pecans just that way.

I've been having some fun making desserts lately, and I turned to our blog archives for some of my childhood favourites. Of course, eating a whole pie yourself, while entirely possible, is not such a good idea. I decided to share with my friends G.P. and Roderick to see what they thought of Treehouse cooking, and save myself the stomachache. 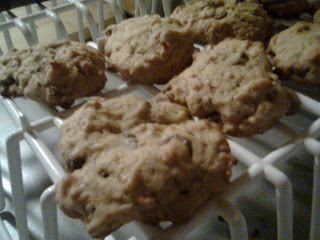 These have been posted about many, many times here and were really a staple growing up. You can read about all Mama Squirrel's variations here. I had baking powder, not soda, so I omitted the salt and substituted three times the called for amount of soda with powder. I've done this a couple times now with absolutely no problems. I had been eating Special K for breakfast every morning and was getting really sick of it so I used that as the cereal...we usually use Rice Krispies or Corn Flakes, and I like the Rice Krispies version much better. I didn't have any rolled oats so I added some extra Special K. I went with Treehouse tradition and used chocolate chips instead of raisins, but for the first time in my life added the walnuts, something we always omit due to nut allergies (not mine!).

I left a few at G.P.'s house before trying them myself, and got a text message in the middle of my night class..."Your cookies are AWESOME!" How G.P. can text with those furry little paws is beyond me. 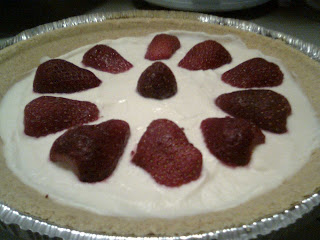 Originally from the Goldbeck's Short-Order Cookbook, tortoni is another food I've never seen outside of the Treehouse. You can read about all our different versions here. Essentially, it is blended, frozen and flavoured ricotta cheese. I made a lasagna but it was a very small lasagna and I had most of a container of ricotta left and was worried about it going bad. When I saw graham cracker crusts on sale (very cheap sale...normally I'd just make one myself) I was inspired. Instead of freezing it in little dishes, I prepared the tortoni and used it as a pie filling, decorating the top with sliced strawberries.

Roderick, being a rat, is rather a big fan of cheesecake, so I introduced tortoni as a distant relative of cheesecake. Roderick was not particularly thrilled with it, but did eat two pieces and deemed the second, which had had more time to warm up, as tastier. Roderick's main complaint was that it really wasn't flavourful enough. I had to agree...I had more ricotta than called for and threw it in anyway without adjusting the flavouring. While it tasted great before I froze it, freezing seems to mellow the taste. Additional almond extract likely would have fixed this problem. I also wasn't a big fan of the graham crust: it was a good pairing with the tortoni but the crust itself was a little off in taste. This would easily be resolved by making one's own crust.
Posted by The Apprentice at Sunday, July 15, 2012 No comments:

What's for supper? Chicken Spaghetti, this and that

Spaghetti with tomato sauce and chicken
This and that: carrot and celery sticks, cheese...maybe garlic toast...

Whatever fruit we have left
Pumpkin cake made with leftover sweet potato (baked in the toaster oven, it's too hot for the big oven)
Yogurt
Posted by Mama Squirrel at Friday, July 13, 2012 No comments:

Turkey fajitas, with green peppers, sour cream, and grated cheddar
Corn on the cob, in the pressure cooker

Banana cake, baked in the toaster oven, and made with butterscotch chips instead of chocolate chips (usually we leave the chips out altogether, so this was a  special treat)
Posted by Mama Squirrel at Thursday, July 05, 2012 No comments: 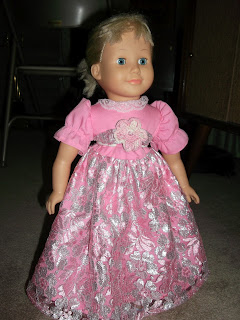 This week's work on the "Aunt Sarah Scrap Challenge" hasn't come totally out of the yard-saled bag; I've also been using up some of our stash of fabric and yarn. 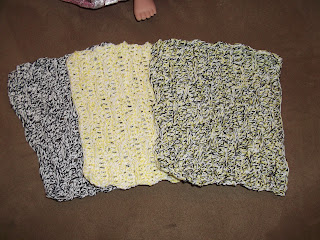 Three Scrubby Rows Dishcloths, made with yellow and black crochet cotton combined with (thrifted) Bernat Handicrafter white cotton yarn. (The disadvantage of these is that since they're fairly heavy cotton, they take a long time to dry.  Lighter-weight cotton or acrylic would probably work better.) 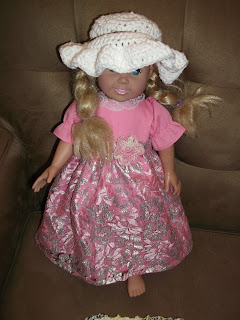 A party dress for Abby, made from some pink broadcloth we'd had forever, plus an overskirt and sash from the scrap bag.  The dress pattern was adapted from one in Sew the Essential Wardrobe for 18-inch Dolls, by Joan Hinds.  If you click on the link and look at the dress pictured on the cover, it's pretty much the same as ours, except that I skipped the collar and didn't make tucks in the overskirt.  The hat is more Bernat Handicrafter cotton yarn. 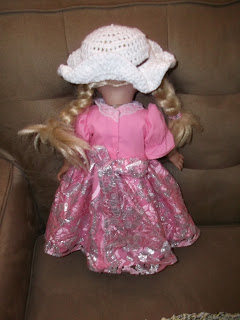 A back view.  The back does up with snaps. 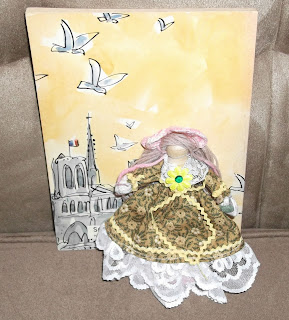 One of several clothespin dolls, with a skirt covering a bag of potpourri.  One Christmas when the Apprentice was small, we made several of these as gifts, and I still had the pattern.

The baby rickrack trim is from the scrap bag, and the calico came from a fabric grab bag that we bought a couple of years ago. This is the only doll I've finished so far, so she got to be in the photo.  I'm working on the others a bit at a time. 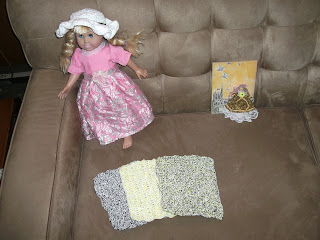 The whole thing. Abby looks like a giant compared to the little potpourri lady.
Posted by Mama Squirrel at Wednesday, July 04, 2012 No comments:

As I've mentioned before, I've been involved with summer Vacation Bible Schools since I was old enough to sing "Fishers of Men."  I've posted about it most summers here.  This year our church won't be hosting one, for various reasons, and I think that's good, in a way; everybody needs a break sometimes, and VBS is a lot of work.  But generally I think we do a pretty good, non-screaming, non-stickering job of it.  When you have fewer fancy resources, you do tend to concentrate more on on relationshipsthan programming.

Veteran CM homeschooler Tammy Glaser posted recently about CM and VBS on the ChildLight USA blog, and I think she hit several nails right on the head.  Even if you have no experience or interest in VBS itself, the post provides a thoughtful look at how one class strengthened its relationships not only within the student group, but also with the teacher, the church body, and the community.  Lots to think about there for families, for homeschooling, and for churches.
Posted by Mama Squirrel at Tuesday, July 03, 2012 No comments: