A Tribute to the DHM

2005, in my world, was the Year of the Blog.
Several of my friends and educational cronies began family blogs, all under assumed names, because that was what you did then. And because we were trying to keep a bit of privacy about what we did off-blog (like run the AmblesideOnline Curriculum), we blogged about everything and anything else. Books. Food. Faith. Kids (and, later, grandkids and assorted others). Good and bad things. And the Deputy Headmistress (DHM) did all that better than anyone. Rants and Raves. Sunday Hymn Posts. 4 Moms. News and Views. Random Updates.

"Quinoa and Amaranth Crockpot Breakfast:  This was ridiculously simple. It made more than enough to feed 5 people with leftovers (because two of the 8 people here are teenaged boys who rummaged for leftover pizza)." (The Common Room, 2013)

"No Time to Read: Tips for frazzled and busy young mothers: Keep a book stand and a hymnal over the kitchen sink and sing hymns while washing dishes. Or print out a hymn and tape it to the window or wall behind the sink.  If you’re not into hymns, try folk songs." (The Common Room, 2012)

"Random: The dread pirate grinned at me delightfully and said, “I yuv Gran-ma” and it made my heart go all rainbows, heart shaped clouds and unicorns leaving skittle droppings, even if it was totally just because he wanted the dried raspberry in my hand, which, of course, I gave him.  " (The Common Room, 2011)

We took turns hosting the Festival of Frugality, the Carnival of Homeschooling, and the Charlotte Mason carnival. Some of us took on political and social issues that hit close to home.

"Well, not just the HG [Head Girl, oldest of the Common Room Progeny]. I know others will be interested, too. But this post  over at the Paragraph Farmer is just plum full of things the HG and I have been talking about recently, things that have come up in her civics class. It’s a meaty read on the corruptive influence of abortion, the Supreme Court, activist judges (and why they can’t be conservative), and Justice Thesaurus." (The Common Room, 2005)

I also blogged, often on her coattails, about the things that got our mutual hackles up. Mistreatment of homeschoolers in Europe, and homeschool-haters in general. Ridiculous rulings banning old books (not because of their content, but because children might somehow lick the lead-containing illustrations). During that particular crisis, I wrote an affectionate parody of Miss Suzy, starring the DHM.

"Of all the reasons for or against homeschooling, the supposed "real costs" or "missed-opportunity costs"  argument has to be about the second-oldest after the socialization question, and it's just as misleading. The Deputy Headmistress of The Common Room has posted her current thoughts on this, here and here.  It's also worthwhile to go back to her 2005 post here, because the comments are so interesting.  I originally posted a response to that one here.  (The DHM and I have been friends a long time.)" (Dewey's Treehouse, 2012)

After a few years, the various reasons for closely-guarded blog identities diminished, and we started sharing more freely about the other work we were doing, and places we hung out online.

"I’m tickled to be able to share some exciting Charlotte Mason related news here for the first time as well- that is, that the AO Advisory has at long last opened up a blog to the public.  You can visit the Advisory blog here. You may also spot the Advisory occasionally roaming unchecked about the AO Forums, where you can find hundreds of other very knowledgeable, helpful, people homeschooling CM style and helping each other along the way." (The Common Room, 2013)

As many people had figured out by that time, the DHM, also called Heartkeeper, was Wendi Capehart, one of the AmblesideOnline Advisory. Wendi and I originally connected on an email list in, I think, 1998, when she and her family were living in the Pacific Northwest. (We found out early on that we had a few things in common:  for one thing, Wendi lived in Canada for part of her childhood.) By the first Year of the Blog, their family had made the move to the Midwest, where they built their real-life Common Room. Wendi wrote most of her original blog from there, and hosted...I was going to say, the AO Advisory and Auxiliary on two occasions, but let's just say everybody. Or at least an awful lot of people, big and small, from many places.

Wendi kept blogging, a few years later, from the Philippines. And, eventually, from back in the Common Room house, only by that time it was just her, her Cherub, and the books. Lots and lots of books. 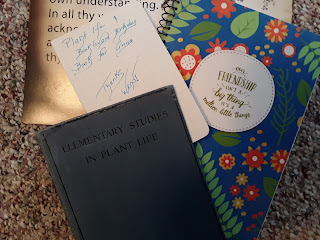 And now both Wendi and her daughter are gone. We are all still reeling. I am not a loud or overt reeler. Most of my reeling stays in my own head, with occasional treks down to my heart (which, apparently, does contain its own "little brain"). But I am hurting a great deal for one who befriended me even before the blogs, who taught me in so many different ways that life goes on, that snowstorms end and wildflowers come back in the spring, but that when it's too cold to deal with that, there are always songs and books and forgotten bottles of olives in the fridge.

For some reason, the "Mrs. DHM and the Bad Squirrels" post kept popping up recently in my own most-read posts. I don't know why old posts suddenly appear there, sometimes it's a spam thing, or maybe I had sent it to someone and forgotten. Miss Suzy is an old book I had when I was younger, and something about the squirrel's love of coziness and her hospitality to the toy soldiers reminded me of Wendi. But much more recently, I came across another title from the same publisher, Miss Twiggley's Tree. I hadn't seen a copy of that in years, and I bought it simply out of nostalgia for my own childhood. 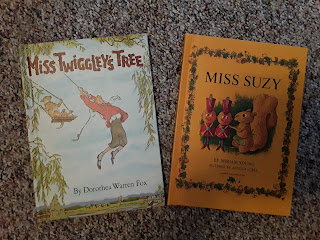 When I read through it, my reeling was joined by a barrage of recognition-induced room-rocking. Miss Twiggley lives quite contentedly alone (although she does have a best friend and errand-runner who happens to be a dog, and she regularly plays host to bears). She lives in a treehouse, and is rumoured to sleep in her hat, because, why not. The mayor's wife thinks she's a nuisance and wants somebody to do something about that nonconformist. But when the big storm comes...the whole town climbs up to her house, and they are warmed and fed. Miss Twiggley muses that "When emergencies come, / You don't think about you. / You help all you can. / And you never ask why. / Then the first thing you know / You forget to be shy." 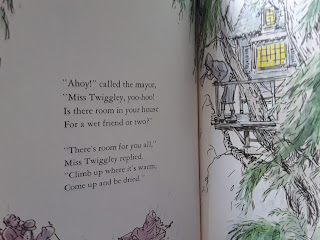 That is what I learned from  the DHM, who knew how to welcome and care for a wet friend or two, or forty; in person, online, or just through a Scripture verse on a postcard.
Godspeed, my friend. Being Mama Squirrel to your DHM was about the most fun I've ever had.

"Bread and milk are plain fare, peasant food, but anybody who has ever baked bread also knows that the humble loaf of bread is a beautiful symbol of hearth and home, a work of patience and attention, a hands on process requiring some attention and feel for when the dough is ‘just right.’ Milk, too, is both an ordinary food, and one of two foods God used to describe the promised land, one flowing with milk and honey. The Proverbs 31 woman is to have the law of kindness on her tongue, and we speak metaphorically of a kind and generous soul as one flowing with the milk of human kindness. Bread is a metaphor, too. It’s a metaphor for our Lord, who is the Bread of Life. He gives us life, and we give it back to Him. Think about that today as you go about your daily tasks and duties. Your praise and your days may be plain as bread and milk, but you, too, can be a preserver of truth and beauty." ("Praise as Plain as Bread and Milk," The Common Room, 2017)