The Phantom Tollbooth and other things, by Ponytails

First of all, I watched The Phantom Tollbooth movie. And then Mama read me the book. Why didn't they put Alec Bings, the Sound Valley, the whole orchestra, and other things like Canby (can-be) in the movie? I guess because they didn't want to make the movie too long. I think Rhyme and Reason looked prettier in the book, because in the movie they're just yellow and red outlines of people, sort of. Why do they do that to a lot of books: make them into a movie, different?

I took two really cool pictures, and some others. Here's one. 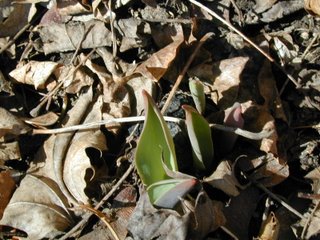 It's a picture of tulip leaves sprouting. I like taking pictures.
Posted by Mama Squirrel at Wednesday, March 29, 2006 2 comments:

Email ThisBlogThis!Share to TwitterShare to FacebookShare to Pinterest
Labels: Books

The Apprentice wanted to make something for dessert tonight, but we didn't have a lot of ingredients to play around with besides a container of ricotta cheese. I showed her the recipe for Tortoni, and she wanted to know if we could make it chocolate-flavoured, and not frozen. Why not? So this is what we came up with. It's not all that original; variations are all over the Internet, some low-carb, some artificially sweetened; sometimes the same kind of chocolate-cheese mixture is used as a stuffing for pears or blintzes. Our version is rich but not very sweet.

Combine all the ingredients in a blender or food processor, and blend until very smooth. (We started out with just the cheese, cocoa and honey, but it needed more sweetener, so we added the sugar and blended it again.) Chill in small dessert dishes. Makes 4 (larger) to 6 (small) servings.
Posted by Mama Squirrel at Thursday, March 23, 2006 2 comments:

Crayons is really good with felts, by Ponytails

Today Crayons did something really cute. She was using a felt set from a garage sale, and she was doing some Silver Chair Narnia with it. That set is really good for it. You can make the snake and everything. And there's even a "Good Day Travellers" lady in a green kirtle. And this is how it looks.

Ponytails: Can I see maybe?

And this is so cute...she made the witch, and she used blue ducks and blue birds to make the earth workers, and our green felt lady was down there with them.

We watched a Silver Chair Narnia movie, and it's kind of bad, because the snake is so unreal. It looks like a puppet on Mr. Dressup or something. I like Puddleglum, because he's Tom Baker, Dr. Who. (Jellybabies, Sarah?)

Email ThisBlogThis!Share to TwitterShare to FacebookShare to Pinterest
Labels: Dr. Who, Mind of Crayons, Narnia

Since Crayons has discovered she can read "a zillion stories," it's been a lot of fun going back over some of her old favourites and letting her do the reading. Yesterday we took turns with a Mother Goose book. She read,

Ponytails was listening and she said, "I know YOU put it in muffins, but then it's only TWO days old."

Email ThisBlogThis!Share to TwitterShare to FacebookShare to Pinterest
Labels: leftovers

Homeschooling Carnival at The Common Room

This week's Homeschooling Carnival is now up at The Common Room, and it includes our post about Crayons' approach to reading. The always-amazing DHM and family have managed to get this up in spite of the fact that they're moving into their brand-new house (complete with Common Room) this week. Hurray!
Posted by Mama Squirrel at Tuesday, March 14, 2006 No comments:

Email ThisBlogThis!Share to TwitterShare to FacebookShare to Pinterest
Labels: Carnivals

My birthday present, my preciousss 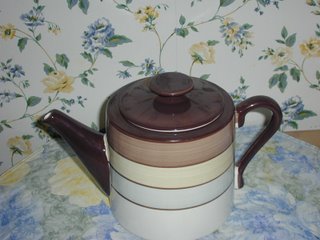 I am not a teapot collector. In fact, I've poured tea for the last sixteen years out of the same red Chinese teapot. So Mr. Fixit kindly bought me a new one that goes much nicer with the blues and browns in our kitchen. (It matches the blog pretty well, too, don't you think?)
Posted by Mama Squirrel at Monday, March 13, 2006 1 comment:

One of the first (and really the only) sort-of-international restaurants I remember eating at WIWAK (When I Was a Kid--there, I just made up my own Internet abbreviation) was George's Chinese Restaurant. George was probably the most authentic Chinese thing about the place...it was pretty standard Cantonese-for-Canadian-tastes cuisine. Very good food, but not scary.

When I started university, I had a Chinese-Canadian roommate whose parents ran a restaurant. She told me that it was also a to-Canadian-tastes restaurant, and that when her parents wanted to eat real Chinese food, they closed the restaurant and headed to Toronto. Since we were studying in Toronto, she offered to take a couple of us to Chinatown for something a little more adventurous than soo guy almond.

So we were introduced to congee, and rice noodles fried with meat, and the little bowls filled with rice where you take some of what's on the table and add it to your bowl. And chopsticks, of course. And tilting the lid on your teapot to signal that you wanted more. I went back to that restaurant a few times while I lived in Toronto, and also checked out some other interesting places. One restaurant I remember featured the cooking of some Chinese province that specialized in spicy (not Szechuan). Not realizing just how hot that chili-spiked dish was already, I added some of the bowl of sauce on the table...it wasn't plum sauce! But I ate it anyway.

This recipe is a lot tamer than that. I think it's kind of semi-authentic Chinese (meaning it uses hoisin sauce instead of ketchup). We've made it a couple of times and it's very tasty.

Get everything ready to go before you cook. Seed, core and cut the pepper into thin strips. Mix up the beef stock, hoisin sauce, soy sauce and cornstarch. Chop up the beans, garlic and ginger.

Ready? In wok or large skillet, stir-fry the beef over high heat until no longer pink, about 3 minutes. Using slotted spoon, remove the beef and set aside. (If you're using leftover meat, cut it into thin strips and add it later with the vegetables.)

Return beef to wok. Stir up the hoisin mixture again and stir into pan. Bring to boil; boil, stirring, until sauce is thickened and glossy, about 1 minute. Sprinkle with green onions or pass them at the table.

I've mentioned the Beany Malone Cookbook before and given the recipe for Beany's Beans. I thought I had posted this recipe for a helper-like dish before, but I don't see it in our archives. Like Beany's Beans and like our Kitchener Special, this recipe (which we had for supper last night) does not use gourmet ingredients. In fact, the number of recipes we make that include ingredients like ketchup is kind of embarrassing. Not particularly healthy or fashionable, I know. But this one is good, inexpensive, and husbands and young squirrels like it, so I'm passing it on, with a couple of adaptations.

Dulcie's Macaroni Meal in a Skillet

2 tbsp. bacon fat (we leave this out)
1 lb. ground beef or ground chicken (it's good with chicken; in a pinch we have even used bacon)
1 medium onion, diced
1 tsp. salt
1/2 tsp. pepper (or less, to taste--we don't like that much pepper)
1/2 tsp. paprika
1 8-oz. can tomato sauce (or equivalent anything else like tomato puree; last night I used part of a can of diced tomatoes and added a little extra water)
1 1/2 cups water, or as needed (depending on how wet the tomatoes are)
1 tsp. prepared mustard
1 rounded tsp. brown sugar
1 tbsp. cider vinegar
1/2 cup ketchup
2 cups elbow macaroni (we used whole wheat)
1/2 cup grated Parmesan cheese for serving (optional. We were out of Parmesan, so I grated some Cheddar and mixed that in before serving.)

This is how I do it. Because the list of spices and things is kind of long, I combine the salt, pepper and paprika with the cupful or canful of tomato sauce (just dump them in the top of the opened can). I put the mustard, sugar and vinegar into the half cup of ketchup. I chop the onion and start browning the ground meat in a large skillet that has a cover; when it's almost done I stir in the onion and finish browning it. When the onion's soft, I add the tomato sauce mixture. The recipe says to rinse the tomato sauce can out with the 1 1/2 cups of water and add that to the skillet. (If you don't have a tomato sauce can, obviously you just measure out the water and add that.) And then add the ketchup mixture.

Stir it all together, bring it to a boil, and then add the two cups of macaroni. Let it boil for a minute or two, and then cover (if you haven't already), turn the heat down, and cook for about 1/2 an hour or until the macaroni is done. You can check it occasionally and add more water if necessary. Mix in grated cheese if you want, or serve with Parmesan at the table.

You can also add canned grean beans or mushrooms to this skillet meal; we've done both. Mr. Fixit likes to add hot sauce at the table.
Posted by Mama Squirrel at Tuesday, March 07, 2006 1 comment:

(Note from Mama Squirrel: I was not so sure about this, re violating one of the Ten Commandments and so on, but since I know that God and Jesus are interchangeable in Crayons' mind, I murmured something like "okay.")

Crayons: Does God have a wife?

Crayons: Oh...why not? Did she die then?

Mama Squirrel: No...God just doesn't need a wife, he's enough all by himself.

(Pause to draw some more)

Crayons: (as scornfully as a four-year-old can say this) Humph. Well, then, how is he supposed to FLY, then?

(Note to self: I think we need to sing some of those Judy Rogers catechism songs again.)
Posted by Mama Squirrel at Tuesday, March 07, 2006 1 comment:

No, no. They're not made with floor sweepings. (My kids think they're so funny.)

These are supposed to be called Kitchen Scrap Cookies, which I don't really like either, but it will have to do for now. I found it on the Like Merchant Ships blog, via a side trip through In a Shoe. Since we did have leftovers from this morning's crockpot cereal (the main ingredients of that were brown rice and oat groats, with a little TVP), I decided to try it. They are good! A lot like pumpkin drop cookies without the pumpkin, which makes sense if you think about it because you're just substituting one thick wet thing for another thick wet thing. We got about four dozen small cookies out of the batch.

Another idea for using up that cooked crockpot cereal (or leftover oatmeal) is to put it in muffins--this only uses up a bit of it (maybe half a cup of cooked cereal per dozen muffins), but sometimes that's what you have. I follow the Tightwad Gazette's instructions for incorporating cooked grains into muffin batter: that is, run them with all the other wet ingredients through the blender, and then add the dry ingredients and adjust the wetness as needed then. I don't own a real blender, but a stick blender works fine for this. I like some applesauce and cinnamon added too. And muffin batter can also become muffin cake if you bake it in a square pan at 350 degrees.
Posted by Mama Squirrel at Wednesday, March 01, 2006 3 comments: