Wednesday Hodgepodge: No Schooling Around

1. August is National Back To School Month...how does that make you feel? Share a back-to-school memory.

Why is it Back to School Month when, where I live, nobody ever went back to school until September? I know some places in the U.S. start in August, though. Or is that just a "National Go Buy Your Back to School Supplies" thing?

First days of school were sometimes strange. In the third grade I started a new school, and since I had almost the same name as another girl in my class, the teacher assumed we were the same person and hadn't set up a desk or a name card or any of those things that are important when you're a kid. When I started middle school, I somehow got into the wrong homeroom the first day and nobody knew who I was or where I was supposed to be. I decided that I must have a special "Who are you again?" goblin following me around. It was actually nice to reach high school and have a little photo card I could whip out if anyone ever doubted my existence.

2. Something you've learned in 'the school of life'?

Someone tried to scam me over the phone today. Names and places have been changed to protect the not-so-innocent.

I had just hung up on the usual sort of telemarketer, when the phone rang again, this time showing a number from another part of the province. I picked it up, assuming that it was the same spam company as before, and a deep voice addressed me as "Grandma." I don't have grandchildren, other than the grand-doggies, who aren't too likely to be phoning me. I said, "Who did you think you were calling?" He said, "Ha ha, I was just joking--this is your oldest nephew." Now, I do have a nephew, but I haven't talked to him for several years. "Is this Billy?" I said. "Yes, it's Billy. You wouldn't recognize the number," he said, "because I'm in -- City. One of my buddies is getting married, and I had some time off, so I thought, why not go."

You don't need to know personal details about my nephew, but basically I doubted very much that he would have travelled that far at his age and alone to go to a "buddy's" wedding. Or that he'd even have any "buddies" who were getting married yet.

"Look," I said, "I just need to make sure that I'm really talking to the person you say I'm talking to. Where do you live when you're not in -- City?"

Silence. Bzzzzzzz. I guess he figured, "Oops--busted by Billy's Aunt."

I've had those scam emails before ("This is your friend Mary. I'm travelling and I need gift cards"), but that's the first time someone's been bold enough to try it over the phone. So, whoever you are, stop schooling around with me. You might think some of us are old enough to get taken in by fake grandchildren and nephews, but it's the opposite: we're old enough not to get conned by this nonsense, so stop wasting all of our time.

Besides having a few words I'd like to say to people who try to prey on grandmas and aunties?

"Slow down, summer." Good weather is too short here. I do like fall, but it's not summer.

I haven't had much summer fruit, for various reasons, and that does make me feel like I've missed something. Summer feels like it should be peaches that squish, cherries that endanger your clothes, and too much messy watermelon. 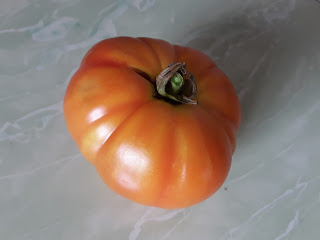 We had one, maybe two good tomatoes and a couple of peppers from our back-deck plants, but that's all. We also have a yellow bean plant in a pot, but the beans we've had from it are tough no matter which way we cook them.

Also, the corn on the cob that we've bought has been disappointing.. 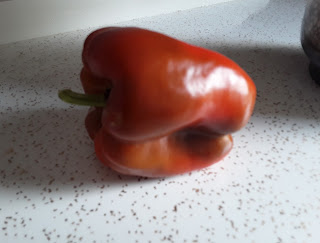 However, on the subject of things growing on the back deck, we have a surprise Peace Lily that suddenly popped up. It belongs to a couple of plants from a gift basket given to us last winter, that we moved to an outside pot when the weather warmed up. I didn't know what the plant was--it had shiny leaves, but no flowers. Apparently it likes the climate on our deck so much that it decided to send up a blossom. Someone told me that it's technically not a blossom, but you know what I mean. It's very pretty, anyway, and it seems to be doing much better than the tomato plants. 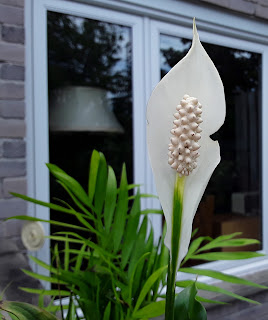 5. What small stuff do you sweat that you know you shouldn't?

If I wrote about it, I'd start sweating about it, so I won't.

Did you know it's National Thrift Shop/Store Day? Here's a mostly-thrifted outfit (except for the boots). The jacket (found yesterday) was a dollar, and the jeans were a dollar. You can see more of my thrifted stuff on the fall clothes post, here. 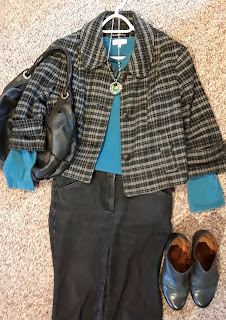 That outfit is adorable!

Our tomatoes did terrible this year! I was so bummed - we loved all of our toasted tomato cheese sandwiches last summer. :( I think it was just too hot here for them this year. I hope you get more watermelon!

Oh a friend of my mother's got taken in by one of those 'nephew in trouble' calls and she sent money. Such a mess and so awful the way they target seniors especially.

Oh yes, those scammers are really annoying! You handled it quite well. I haven't had any phone calls from so-called family or friends trying to prey on me yet but I did get a few text messages (even though no-one does traditional texting for personal things here anymore) from so-called friends from abroad (who I do have) saying they're coming over. Here in the Netherlands, there's also this thing where scammers call you pretending to be the "high court of the Netherlands" (in English, and it's not what it's called) and saying your social security number has come up in some large-scale fraud investigation. I had this happen once and hung up immediately, then got called by similar numbers I didn't recognize two more times but didn't even pick up the phone.

Glad you weren't caught out by the scammer. They can be very clever with their tactics.

Next time they say "Grandma?" I think I'll just say "Oh, hello dear," and see where that goes. These guys must be good at improv.