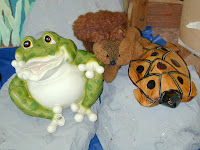 Every summer of my childhood, we went to a Baptist church's VBS. (Our church didn't have one.) As so many people remember from old VBS's: the cookies and Kool-aid flowed Deep and Wide, and the crafts were largely popsicle sticks. The theme for the week might be "Following Jesus," and I have no idea who published the materials but they--at least the stories for grade six or so--were pretty meaty. One year it was a version of Nicky Cruz's Run Baby Run, about gangs in New York; another year I remember reading missionary stories that must have been about John and Betty Stam, because I can still hear this Dr. McCoy voice in my head saying something like "Dangit, Jim, those Lisu are going to learn about Jesus."

What also sticks in my head is the person who taught us older kids for the last two years I was there. I remember two things about him: first, that I always admired the commitment this young man had that made him come back and teach us rowdy kids, year after year. The other thing I remember is that he was killed on a motorcycle a couple of years later. I've always felt sorry that I never got a chance to thank him properly.

I've helped with several VBS's since then, at different churches. I've noticed how they're changing. Especially I noticed at the big church we attended while Crayons was very small--I didn't help those years, just watched from the parent's point of view, and that was the first time I'd seen one of these new Wow curriculums with so many kids, music videos projected on big screens, and more screaming during the music than I'd ever seen in a church before. The crafts were still paper plates and tie-dyed t-shirts, but overall there was a new, slicker, more packaged feel to the whole thing. The themes are now more like birthday parties or library reading clubs: outer space, treasure islands, even (last year) an amusement park. Kids go here, leaders say this and that, and then it's on to the next station...am I wrong in feeling that it's all getting a bit too programmed? (Especially when you find out that every other church in town, and maybe more than that, will all be using the same curriculum...VBS must be about the only time all year that we all get so ecumenical.)
As a parent, I also have a bit of a problem with some of the "discipline the parents" language that appears in the Director Manual I was given this summer. "Some parents may want their preschoolers to [stay with] older siblings. Firmly insist that the [preschool] activities are the best ones for preschoolers." It's not that I'm arguing with that, I'm just not that impressed by being "firmly insisted" at.
The church we have been attending for the last three-and-a-half years is very small, and our VBS is not very big either. It also leans more towards the traditional Kool-aid mode than the frantic screaming and plastic memory toys--probably because our membership, and in particular our VBS leadership, is largely made up of an older generation. Our imaginative, energetic friend who has directed the VBS for three of the four summers we've been there was a teacher for many years, and she runs things according to her long experience with children--no matter what the books say to do. We also don't have a policy of "firmly insisting" that parents stay out or that children go where they're not comfortable.
But we're still using the Big Mega VBS Curriculum--or at least the parts of it we could afford. No music videos, although we did get a CD of the music. No plastic toys. We didn't even get take-home papers or worksheets, which in my mind is a plus anyway.
I was given the Preschool level curriculum to use, which was a bit of a problem since the seven or eight children I was teaching were all five or six years old. (The rest were in one big group for the elementary-age children. We didn't have any preschoolers.) I didn't need to teach the Bible story, since that was acted out during group time each day. We didn't have the additional DVD stories for them to watch. I didn't need to do crafts with them, since everybody made crafts together later in the morning. I didn't even need to do many songs, since everybody sang together at the beginning and end. This is all to say that most of what I was given was unnecessary, or in some cases too young for my class...I had to dig through the teacher's guides and pick out what was left.
What I was supposed to do with my group, each morning, was provide some kind of follow-up to the Bible stories, help them learn the memory verse and Bible themes for the day, and play games. I did find a couple of games I liked in the curriculum materials, but some of the suggested activities made me wince. I refused to have them go around in a circle and sing "Here we go round the burning bush." I'm sorry, that's not only silly but it seems somewhat blasphemous as well. (We also--collectively--decided NOT to serve a snack called "Berried and Raised" on the day we learned about Jesus' resurrection.) 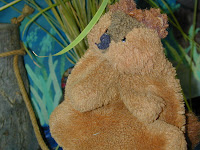 Dewey fills in one morning for the curriculum's official hand puppet
Anyway--what did our class do? Played Freeze Tag--to get unfrozen, you had to shout out the memory verse. Played What Time is it Mr. Moses? (that felt slightly less blasphemous than dancing around the burning bush). Jumped along a number line marked with pictures to help learn one tricky memory verse. Sang a couple of songs I dredged out of my memory. Listened to a couple of picture books that fit with the day's theme. Crossed the "Red Sea" (a balance beam we improvised). Watched Ponytails do a magic trick, and talked about how God really did make wonderful things happen (no trickery). Played Hot Potato and said the memory verse. Watched Ponytails chat with Dewey about flashlights and missing batteries. And so on.
And the kids really did enjoy the Bayou theme, as far as we took it, and the dock area that some wonderful volunteers created (with real bullrushes to hide baby Moses in). 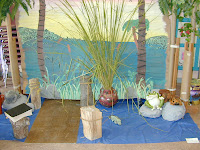 Sounds like you had a great VBS. I think there is a Jekyl and Hyde quality to many VBS programs. On one hand, they want to make it fun and approachable, even for kids who don't attend church. On the other hand, they want to provide substantial, meaty teaching that transforms lives.
Sort of like the debate we have (at least in the US) over the nature of seeker friendly churches. At some point, you make it so comfortable that it isn't any different than what they can get outside of church. And where is the transformation in that?

I completely agree with "Sebastian". I taught Sunday school and Vbs for a few years and really felt pre-packaged programs discredit the value of our Holy Scriptures. They place the Bible (true) stories in the realm of Saturday morning cartoons and, in my mind, make it difficult for kids to truly grasp the reality of our Christian heritage. I have been so frustrated that I did not send my children to VBS this year. Perhaps a poor choice, but the whole idea of not letting an older sibling help a younger one (a problem we have faced) among the fact that they seem to learn nothing of spirtual value (at the church here)I couldn't justify carting them off for the 5 mornings.

It sounds like you did a wonderful job taking the lemons and making lemonade :-) If only more leaders could be like you! (Maybe that will become my eventual mission! Reform VBS!!)