Baby shower (and no chocolate on the diapers) 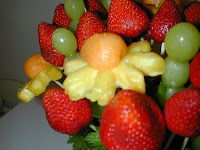 Some have been done to death. How many things on a tray can you remember?

So when it was time for a much-anticipated baby shower this weekend (for a mama who's given many memorable parties of her own, we (her friends) decided we had to do something different. But not gross.

When we asked the New Mama's other offspring (who's the Apprentice's age) what they needed, she said that they were well stocked with clothes and all the big stuff...so we thought having a surprise Toys for Boys party would be fun (and probably appreciated after years of pink). That idea also inspired the games and decorations.

The guests were a mix of moms and teenage daughters--plus our own younger squirrelings, plus the New Arrival who got very well hugged and walked around. Plus Baby's Dad and Mr. Fixit, who spent part of the time hanging out in the workshop. Fourteen bodies altogether. We all know each other--we used to get together every couple of weeks during the older girls' younger years--but don't often get everyone together now. So it was kind of like a family reunion too. (The only (female) bodies missing were our friends who moved to the U.S., and a couple of daughters who were travelling or doing other important things.)

We browsed both the baby shower sites and the birthday party sites, and started to get inspiration from some of the ideas there: Nursery Rhyme Jeopardy made Mama Squirrel think of doing something like Toy Jeopardy or a toy trivia quiz; the Lego parties sprouted the idea of having some kind of a model contest or race. Just thinking about all the different kinds of toys through the years made me remember how many little bits and pieces we have around here already (and the old catalogues we've been looking at). Finally we used those ideas to come up with two of our own games. Actually three, but we decided that two were enough. (The third was going to be a competition to see who could build the best "baby stuff" (high chair, bed, toy) out of Lego.)

The first was a variation on the tray game, and it was partly inspired by our problem habit of keeping things for a long, long time. We're squirrels, after all. So we dug around in the bottom of the Treehouse, and found 20 different toys, or parts of toys, ranging from the 1960's through today. We numbered each toy, and everybody had a few minutes to write down the name. The most toys guessed correctly won a prize (two people tied with 15 right). Most people got Mr. Potato Head, Slinky, and Cabbage Patch Kids. Some got Lincoln Logs, Polly Pocket, and Fisher Price Little People. Nobody guessed the Colorforms--well, we did have to make a couple of them challenging! But I thought somebody might remember the Liddle Kiddles.

The second game came out of the WishBookWeb vintage catalogue site, and it's something that Crayons and I did a couple of times this year for school. What you do is pick an old Christmas catalogue on the site--say 1942--give yourself a reasonable budget for the time--and pick out presents within that budget.

I picked out seven catalogues from the site and printed out about ten toy pages from each one. Each pair of players got those pages in an envelope with the year marked on it and some play money, a sheet of coloured cardstock (3-hole punched), a glue stick, scissors, and markers. (Crayons volunteered her set of fancy scissors too.) The 1933 team got only $5; the 1988 team got something like $25. (Yes, I know that in 1933 you would have been extremely lucky to have had $5 to spend on baby presents; but I didn't want to give them 39 cents either.)

The challenge was to pick out presents for the baby and cut and paste them onto a page for a keepsake booklet--with autographs, comments and so on. We had prizes for the most artistic, most fun for the money and so on. Mr. Fixit and the Baby's Dad each made a page too. The last page of the booklet was left blank, and one of the guests used it to write down the "real" presents when Baby's Mama opened them later. At the end, we tied the pages together with ribbon.

There was lots of laughing and reminiscing over the catalogue pages while everybody worked on them--"oh, I remember those!"--"look what a teddy bear cost in 1933!"--"hey, Mom, you found one of those at the thrift shop."

Each family brought a plate of finger-food desserts--cookies and squares. We used Momma's photos and recipe for mini cheesecakes. (Jay's Jammin' also posted some tips for these.) I thought they might fall apart when people unpeeled the paper cups, but they held together really well. I think ours might have been a bit smaller than Momma's--I was just guessing at how much crust and how much cheese mixture to put into each one. We used half her filling recipe--1 package of cream cheese and so on--and ended up with 36 mini cakes. 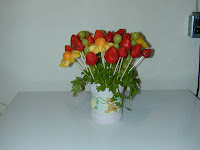 We followed the very detailed directions here to make an edible fruit bouquet. It's the tail end of strawberry season here, so this idea is a good one for June or July; I don't think I'd try it in January. (I liked the baby sock bouquet too, but the fruit bouquet looked tastier.) (Yes, I know our skewers show a lot more than theirs did--we just did our best.)

High up in a cupboard we found a ceramic container that someone had sent flowers in when one of the Squirrelings was born--not sure which one, and I had probably thought of sending it (the vase, not the Squirreling) to the thrift store more than once, but now I'm glad I kept it, because it did look good with the fruit arrangement. (Photos coming.) I was going to make a batch of plain playdough to stick the skewers into, but I found Play-doh Soft-packs at the dollar store, saving me the trouble. And we saved the Play-doh afterwards.) Ponytails and I put the fruit on the skewers in the afternoon and refrigerated them until after dinner; then she arranged the vase, and we put it in the cold room until the party. (It wouldn't fit in the fridge.)

We made punch (one of the guests brought her punch bowl), from a recipe I saw in Taste of Home while waiting at the dentist's last week. (2 litres club soda, 1 750 mL bottle white grape juice, 1 cup sugar or to taste, 1 cup lemon juice. Mix and serve with ice.) I put on a pot of coffee too.

We used a lot of things we already had: the old toys for the games and decorations; homemade jam for the cheesecakes, homegrown parsley for greenery in the fruit bouquet, the re-used baby vase, skewers, "real" plates and cups, surplus-store cardstock, and so on. I printed out the catalogue pages mostly on the backs of other printouts (that was partly because we forgot to get more printer paper).

We spent our money where it seemed to count the most: fresh fruit for the bouquet (and a daisy-shaped cutter for the pineapple, although we could possibly have improvised with a knife); cupcake liners and Nilla Wafers for the cheesecakes (graham crackers are cheaper here, but I wanted the "real thing"); a few partyware things. We stopped at a new Dollarama that had a really good craft-supply section, so that's where we found prizes for the games.

If you're planning a shower for a mom whose baby has already been born--and especially if she's nursing--allow time in the evening for her to take care of the baby's needs. New babies can take a long time to nurse, especially if they're heading for a nap. Most guests don't mind entertaining themselves for awhile if the New Mama has to disappear for awhile. For groups that don't know each other well, you might want to have a game or something that doesn't require the Mama's presence. (This happened to Mama Squirrel too when the Apprentice arrived slightly ahead of schedule (and ahead of the baby shower). It wasn't that we were squeamish about feeding the baby in public, it was more that we weren't very experienced at it yet, and our Squirreling wasn't going to go to sleep with all that noise.)

The best idea, I think, is to do what you're comfortable with and what will mean the most to your guests. For this group of friends, that meant--along with no chocolate on the diapers--spending a few minutes at the end thanking God for the blessing of our children and families...and each other.

Hi, nice post. My wife uses those printable baby shower games when hosting a shower at our house.

Very colorful and interesting ideas with a delicious edible bouquet.Edible bouquets add charm to any place.