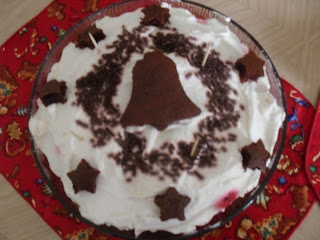 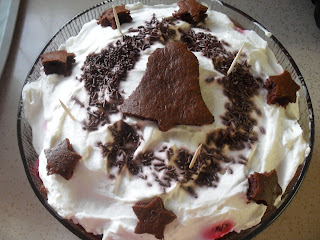 (The toothpicks are not meant to be decorative--they were to hold the plastic wrap up.)
This is the recipe we used for trifle--the same one we've used for several years, but it's been quite awhile since we've made one.  We cut back on the sugar in the whipped cream, and added thawed frozen raspberries.  What to put on top?  Mama Squirrel found some chocolate sprinkles in the cupboard, and The Apprentice used bell and star cutters to cut shapes from the leftover cake.

(Note:  we made this a day ahead, since the trifle part is better if it sets--but Mama Squirrel forgot that sprinkles on whipped cream tend to melt and bleed a bit.  Good thing we had a few left in the jar to top it up again.)