I'm posting this a day early--anticipating our Saturday class!

Today I'm not going to reinvent the wheel--just teach you how to make one.

Well, not this one--but something a bit simpler to start with.  The girls in our class are going to start working "in the round": starting from a center point and working out to make round (or square) flat motifs (think doilies), or tube-shaped pieces (think socks?).

A big tube-shaped pillow I made for the Apprentice
It's possible to make lots of crocheted things by working only in rows, not rounds, but working in the round has its own advantages: you can just keep going and never have to worry about turning your work or whether your edges are perfectly straight.  You could make a hat, for example, by crocheting a large rectangle and sewing it up the back--but it's just as easy to start with a very small circle at the top of the hat, keep the circle growing until you have something that covers the top of your head, and then work straight down until it's done.  In fact, that's what my first crochet teacher started us with, years and years ago in the fifth or sixth grade--crocheted hats.  Round and round and round and round... 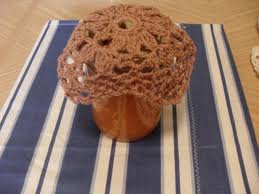 A jar topper or mini doily--see the starting point in the middle? 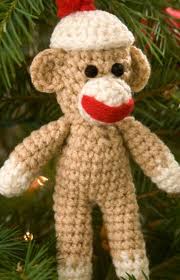 Almost all the monkey parts were made in the round--saves on the sewing up at the end.

The best online tutorial I've found for in-the-round is this one at Crochet.about.com.  Really, I don't think I can explain it any better, so just head over there and let them teach you.  You chain two, three, or four times; join with a slip stitch; and work any amount of single crochet stitches in the loop you have just made. Does this look familiar? It should—it is the same as making a scrunchie, only without the elastic. The nice part about working in the loop is that you do NOT have to work into every chain—you are just working over the loop. When you are done that round, you can pull on the loose end and the circle should tighten up a bit.  If you follow the tutorial all the way through, you will make a flat circle in several rounds, that can be used for a coaster.  The tutorial suggests making two circles from cotton yarn and sewing them together for a thicker coaster.

More stuffed animals: see how the ponies' noses start small and then increase into the head shapes?  The bodies and legs are also made in the round.

There is a newer way of starting a loop, called a magic ring or magic circle, which gives you more control over pulling the hole closed at the end of the round. You wrap the yarn a couple of times around your finger, anchor the loop with a chain stitch, and then work into that.  But most patterns still have you start with chains joined with a slip stitch. (Sometimes it will just say to chain twice and then to work several stitches into the second chain, acting as if the chain stitch is a loop itself.)

And have I mentioned increasing in crochet?  It's very easy: just work more than one stitch into the stitch in question.  You know--usually you work along, one stitch into each of those chain-looking things in the previous row?  You usually want to increase evenly throughout a row or a round, unless you're trying for a funny effect like a camel's hump.  So, often a pattern will say something like 2 sc (single crochet) in the next stitch, sc 2 (make two single crochets in the two next stitches), 2 sc in next stitch, sc 2, continue across the row.

(More fun with prepositions:  sometimes a pattern might say "in the next space", which some people find confusing at first.  Just remember that you can crochet into or around almost anything, as long as there's room to get the hook through.  You can crochet into a loop, into a stitch, into a space (if you've made chain loops in the previous row), over an elastic (like the scrunchies) or a plastic ring, or into holes punctured into the edge of a handkerchief or napkin.  When you crochet into a space, you don't work into the chain or chains that make the space--just work over the strands.)

Today's other project:  Since it's almost St. Patrick's Day, the girls are going to follow a video tutorial by Teresa Richardson to make a shamrock, using green worsted-weight yarn. (Look on YouTube.)

So far we have used only single crochet, but there are “taller” stitches that you can make by adding “yarn overs.” This pattern includes a very tall stitch called a treble (meaning the same as “triple”), which you make by bringing the yarn twice over the hook, pulling up a loop (which gives you four loops on the hook), and then pulling two stitches at a time off the hook: so yarn over and pull two off, you have three; yarn over and pull two off, you have two; yarn over and pull two off, you have one. (Remember that treble stitch doesn’t mean bringing the yarn over three times: the triple part comes in when you pull the loops off three times.) You will not be using treble stitch very often (double crochet, which brings the yarn over only once, is much more common), but it gives a good effect in this little shamrock. Plus the pattern itself is so easy that all you have to really worry about is making the new stitch.


If you follow the pattern, you will have one small motif that you can pin on something; but you can also finish the shamrock, keep chaining about 30 stitches (or as long as you want) and you'll have a bookmark. You can even finish the chain, slip stitch into the fourth chain from the hook so that you have a loop, and make a second shamrock into that loop, so you have a double-ended bookmark.

Have fun, and I'll post one more class in two weeks.