There is a lot going on in the media about free speech, homeschooling, Christians, and education in general.  A Peaceful Day has a post discussing an article that seems to raise unwarranted concern about homeschoolers, particularly American politician Rick Santorum.  Is the real concern that some homeschooling parents (religious or not) might neglect academics or (puh-leeze) socialization?  Or is that just a smokescreen for those who separate "freedom of worship" from "freedom of religion?"  I'm not sure.

As I've said before, merely occupying a particular place in society is enough to ensure that some people out there won't like you.  I am a middle-aged white female, educated in Ontario public schools and universities. I have been a stay-at-home mom for the last twenty years.  I attend a Christian church.  Our children have received most of their schooling outside of the public school system.  I diapered a baby in disposables, I eat pork, I buy cold cereal, I read books by dead white guys, and I wear blue jeans.  I'm sure there's at least one thing on that list (I could come up with more) to cause general fear and mistrust.  In some people's minds, I'm a very dangerous person. 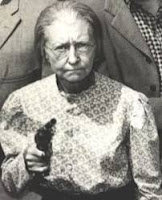 Well, Bubba and me seem to have larned our young'uns good enough that they can get by with the readin', writin', and figgerin'.  The two that went to public high school have been on the honour roll, and have earned a consistent stream of positive remarks from their teachers.  And they've made friends too--imagine that.  The oldest graduated with not only a high school diploma but with most of the requirements completed for her hairstyling apprenticeship, and she completed that soon afterwards...just before she entered university as a science major. (Yes, big bad science.) Middle daughter, now in ninth grade, has her own ideas about all the marvellous things she'd like to do and how she's going to do them. And what can I say about the fifth-grader, whose "lack of exposure to the real world" includes a weekly stint working with adults at the thrift store, and whose current favourite TV show is She-ra, Princess of Power? 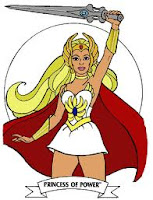 Sure, there are opportunities that we couldn't provide, just because of our own family circumstances.  We're urban, not rural; we aren't world travellers; the girls haven't had much opportunity to participate in organized sports.  (Honestly, they didn't care about that.) Only one of them has taken swimming lessons. But guess what? They (at least the older two) can solder, handle a screwdriver, and change oil.  They've taken voice lessons, dance, improv, and drama (at various times).  They know how to shop for groceries,  mow the lawn, and run the washing machine, and they're aware of the dangers of misused credit.  They're the ones who are recruited to water vacationing neighbours' gardens, and help with younger children at church.  The oldest paid for most of her own "wants" during high school, through part-time jobs. All three of them run circles around me with their electronic gadgets (not around their dad, though--who do you think taught them?).  They are not shy about reading or speaking in public.  They can hold a conversation with people outside their own age group. They have opinions.  They argue with each other, and sometimes with their parents. They also identify themselves as Christians.

(I guess that last one must have been brainwashed into them, yes?)


Related posts:
Answers to some misconceptions about homeschooling
Bubba and me think that homeskoolers are not so freaky
How come your kids don't know that?
Is public high school all that perky?

Ah yes, but what are the basics? That's the question I'm grappling with now. Are they different for Christians?!

Basics of a curriculum? Well, I can't do better than quote Charlotte Mason, chapter 10 of Towards a Philosophy of Education:

"We, believing that the normal child has powers of mind which fit him to deal with all knowledge proper to him, give him a full and generous curriculum, taking care only that all knowledge offered to him is vital, that is, that facts are not presented without their informing ideas. Out of this conception comes our principle that:––

"Education is the Science of Relations'; that is, a child has natural relations with a vast number of things and thoughts: so we train him upon physical exercises, nature lore, handicrafts, science and art, and upon many living books, for we know that our business is not to teach him all about anything, but to help him to make valid as many as may be of––

"Those first-born affinities
That fit our new existence to existing things."

I love it! I'm sure we're all "dangerous" to someone! Sheesh you'd think people would have something better to talk about or something worse to worry about than homeschool moms! :)

Education is education regardless of where you go. one can pick at whatever system is used.

My personal choice/decision is that homeschooling is generally a better option.

I challenge anyone to show me a parent, or teacher for that matter, who doesn't, in some sense of the term, 'brainwash' a kid. :-P

i've always thought of you as dangerous. perhaps the most dangerous person i know. perhaps.