"[Margaret] also was a very tired woman, and her fatigue took the form of being unable to think about anything except food for more than two consecutive minutes....Except, of course, the garden....These fine autumn days were so precious...these lovely days....What in the world could they have for breakfast?"  ~~ Elizabeth Goudge, The Herb of Grace (Pilgrim's Inn)

"Surely, you begin to feel tired, discouraged, irritated, frustrated and hopeless.  Your own energy begins to ebb away.  You decide to put off the rush of getting your article written.  After all, you might as well go out for a walk."  ~~ Edith Schaeffer, "Environment" in The Hidden Art of Homemaking


"Yet it was chiefly her body that was tired now; her mind, which had been so weary and fretted in London, had been wonderfully rested by this house that was now her home....[Nadine] stretched out a hand and laid it upon the paneled wall beside her; it was warm in the sun, as though it were alive....This house was maison-dieu, and the stripping away of all that was unworthy and the building up of new beauty was in the nature of a crusade.  And the house had agreed and collaborated."  ~~ The Herb of Grace

"It goes without saying, too, that 'The Environment,' which is you should be an environment which speaks of the wonder of the Creator who made you."  ~~ "Environment"


"[John Adair] jumped up, went to meet David with outstretched hand, faced him squarely with his tawny eyes alight.  'Forgive the impatience of these two musketeers waiting for the third.' The extraordinary warmth of the tone astonished David, the almost blazing kindness in the eyes, the strong grasp of the hand that seemed apologizing for he did not know what...."  ~~ The Herb of Grace

What was it that allowed John Adair to move from a position of scorn and resentment, and to offer this sudden unexpected and undeserved grace to David?

A sudden flash of understanding that David was made "of the same stuff as himself." 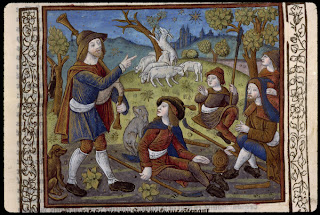 (15th century woodcut linked from this page, although I can't find the reference)
Posted by Mama Squirrel at Monday, July 22, 2013